Barely a hundred metres from the MOB HOTEL in Paris, which opened in 2017, is the new MOB HOUSE.

MOB HOUSE offers a new model of hotel with its 3-in-1 room designed for longer stays: a bed, office and meeting room all in one.

MOB is one of many modern disrupter brands, it’s all about social ecology, affordable luxury, and sustainability.

Everything is geared to suit the lifestyle of today’s savvy and environmentally conscious business traveller.

Interior spaces are designed for social interaction: communal seating, a conversation room, and a central table d’hôte where guests are encouraged to share ideas at their very own networking hub. 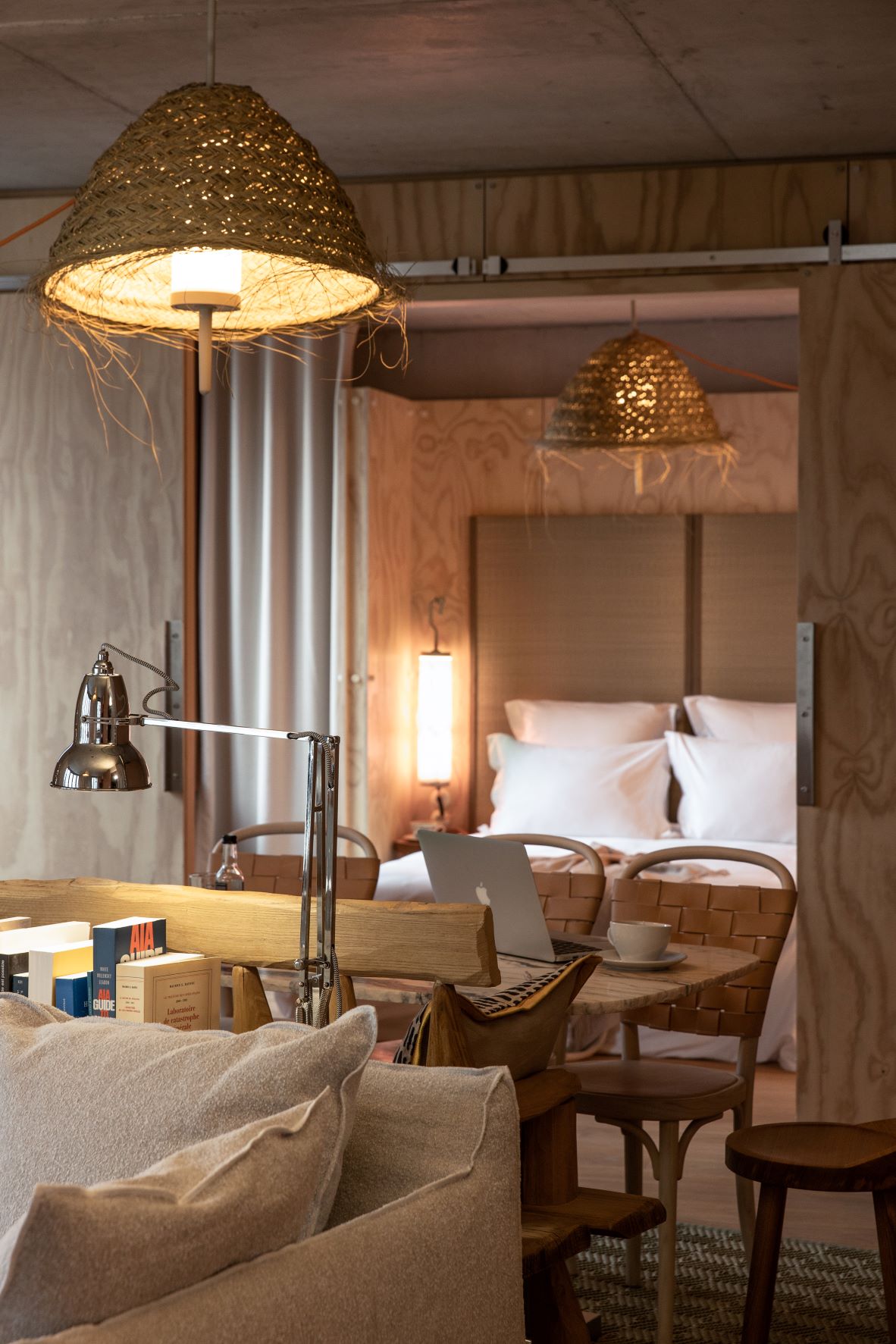 What is MOB HOUSE?

Whilst it is essentially a business hotel, MOB HOUSE is also dedicated to the very heart of wandering and hospitality.

From the construction of the building, favouring the know-how of craftsmen from France and Italy, right down to the open kitchen, where guests can see the dishes they are about to eat.

MOB meets – with its spaces dedicated to the nomadic worker, who comes here for an hour or a meeting, for the day or for a professional lunch.

MOB sells – with its shop offering stationery, drawing and writing materials for the visitor to covet and the worker to buy.

MOB talks – with its conversation rooms, welcoming teams who have come here to find a refuge, at once exotic, welcoming and stimulating, likely to help them think, work and produce their projects together.

And then, perhaps more than anything else, it is in the “3-in-1 room” that the centrality of work and production is embodied at MOB HOUSE.

It is here that work and rest, the professional and the intimate, intersect without ever merging.

This is where, for the price of a night in a hotel, the travelling entrepreneur now has a large bedroom, a real meeting room and a real office in one modular space.

MOB HOUSE ‘revisits the notion of value and the concept of luxury’ with its organic restaurant, its gym, its 2000m2 gardens, its terraces, its outdoor swimming pool or its high-speed wi-fi in every space.

However, the deep conviction of its creators is quite different. For them, the real wealth offered by MOB HOUSE to all its guests lies elsewhere.

A wealth that could be summed up as follows: time and space.

The value of suspended time, for an hour, a day or a whole week.

The luxury of a space open to everyone, somewhere between work and leisure.

A place, not of dilution, but on the contrary of conciliation between the professional and the intimate. 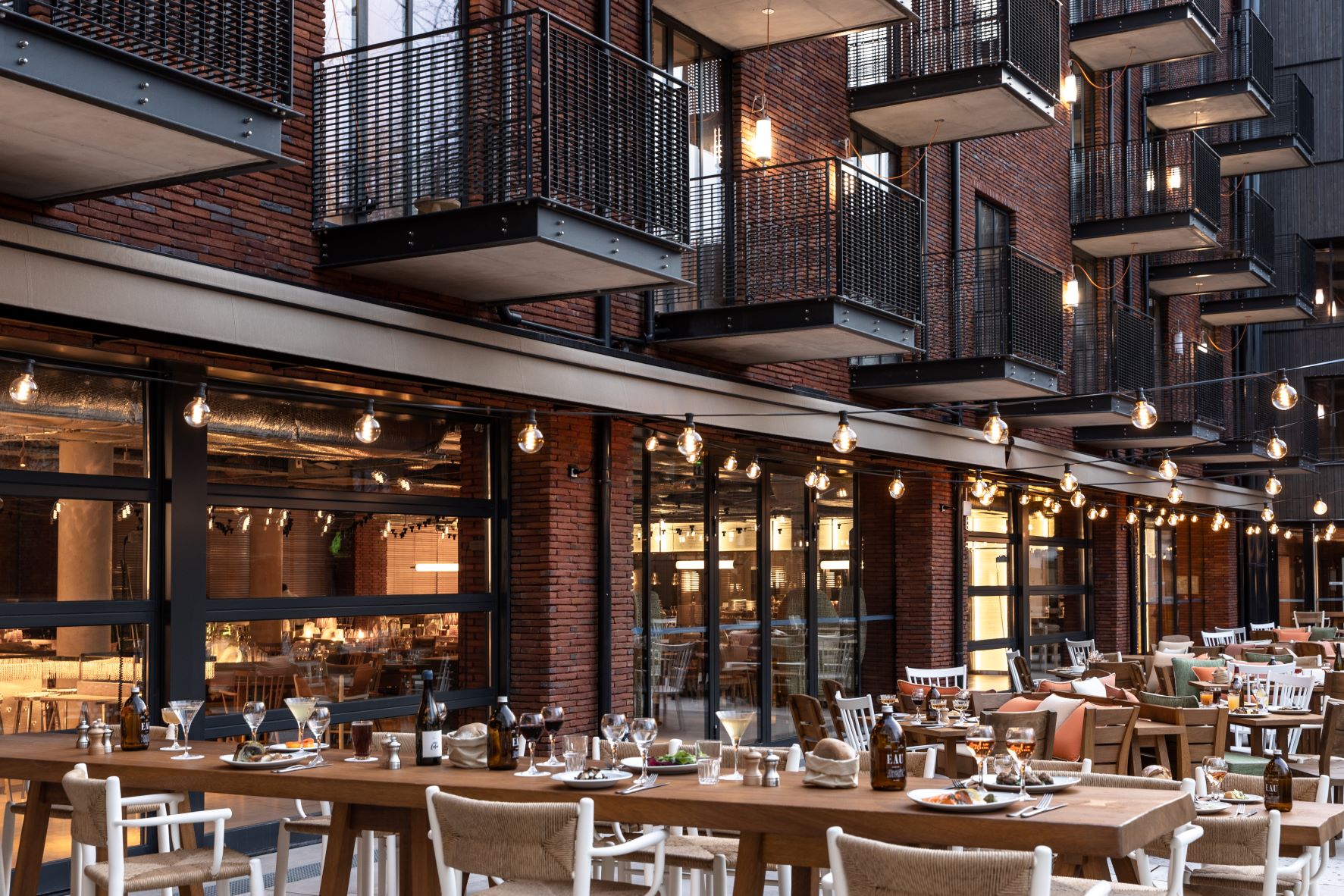 In his own words Aouizerate discusses the project, how it came to be and how it meets the well-being needs of its guests.

“There is always a smaller story hidden behind the big story…

“When I returned from Brooklyn in 2015, the city where the first MOB restaurant came into being, I immediately looked for its equivalent in the Greater Paris area.

My wanderings quickly led me to Saint Ouen, a region of cultural diversity where social ecology, the MOB’s primary value, has fully asserted itself with its 150 years of flea market history.

This was a district which had already sought answers to the problems of overconsumption and which, as accidental visionaries, anticipated the whole recycling movement by giving objects a second lease of life rather than throwing them away.

Saint Ouen is, in our opinion, the ideal region for inaugurating the social ecology specific to the MOB movement.

So we logically decided to make it our headquarters.

Like everything urban, and even more so during the COVID crisis, the need for space is what drive us.

In my opinion, this is a new definition of luxury for the “Co2 ” generations who are Co-living, Co-working, and Carpooling, where space sharing is becoming standard for the sake of economy and simplicity.

MOBs, whether they are MOB HOTEL or MOB HOUSE, are always created based on large outdoor spaces.

This is a non-negotiable imperative for us.

So it was, during a weekend in Les Puces, I fell under the spell of the largest private landscaped garden in Saint Ouen.

We could glean an idea of its full impact through the tiny gate.

It immediately seemed evident that it would be great if we could open it up to the public, so I bought it with my friend and lifelong associate Michel Reybier, and soon it was to become the MOB HOUSE.

The reason our two projects, MOB HOTEL and MOB HOUSE, are being built a few metres from each other is because they are jointly helping to write a single novel together, with social ecology as the foundation.

This public, grassroots, democratic and unifying version of the MOB HOTEL is open to its neighbourhood, residents and individuals who are involved in a project.”

Is this a roll-out?

“We’re an indie company, MOB is not a chain and doesn’t mass produce any of its creations.

So we specifically always start our projects from a blank slate, taking the time to understand the urban, social and cultural environment we are going to be part of.

Whether it be Saint Ouen (MOB’s headquarters), the Lyon Confluence or soon to be Brazza, in a former industrial wasteland in Bordeaux.

It usually takes no less than three years on average to finish a new project. 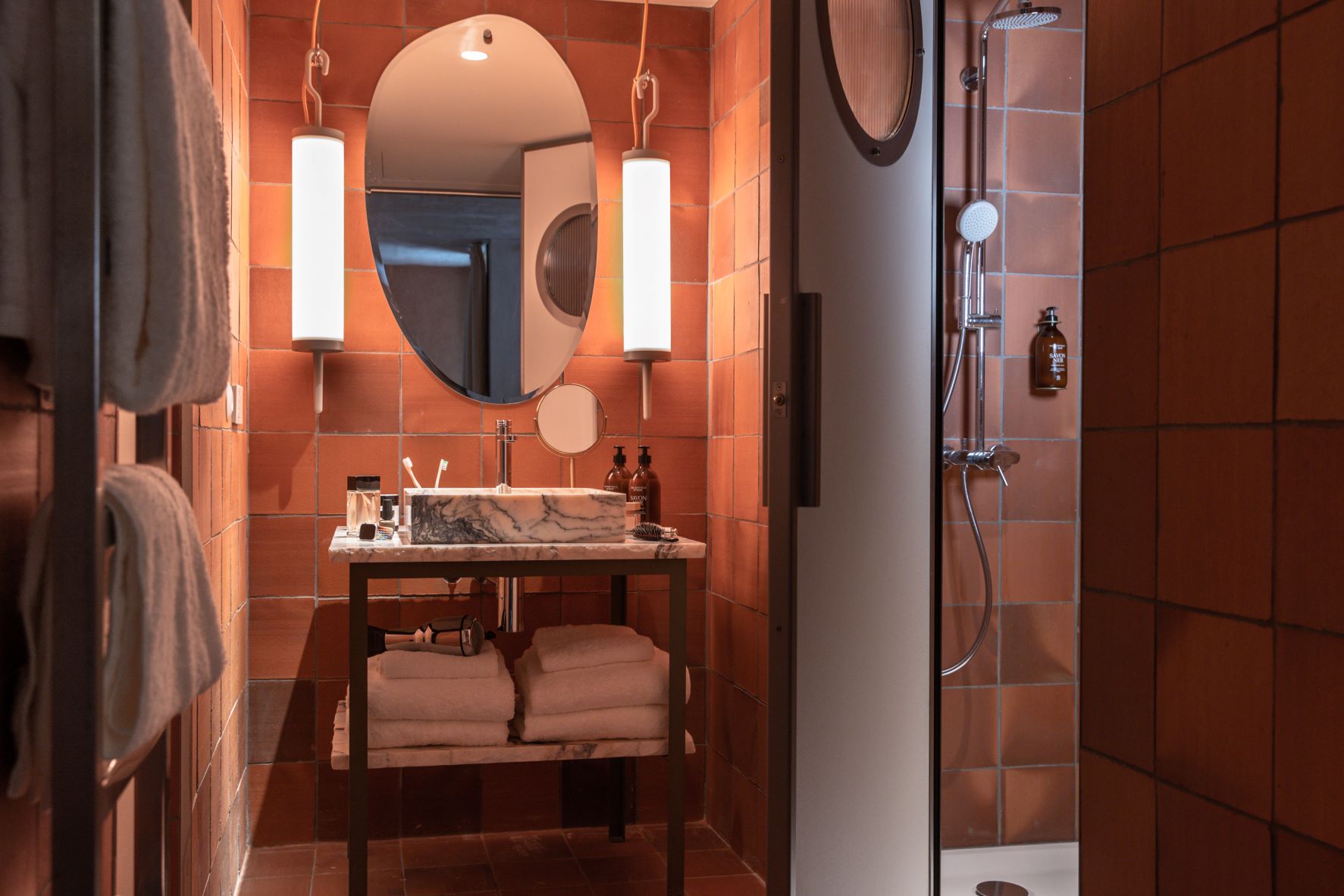 Being artisanal also means we want to work with people who, like us, stand for the same values and appreciate expertise.

So just to give you an illustration, the MOB HOUSE involved a tremendous amount of craftsmanship.

From the bar, which was hand forged, to the rooms with their huge wooden trunks, to the shower doors and, once again, the Beaujolais ceramics.

We only work with family businesses which are mostly French or European that we already know or have discovered.

They’re craftspeople who, like us, are working actively to preserve local know-how.

Last but not least, being an artisan also means knowing how to keep an ear out and plan for new paradigms.

This is the very purpose of the work started by MOB based on the central subject of social ecology… But craftsmanship is also a form of luxury. Because true luxury, in an age where everyone wants everything delivered to their door in one click, is taking your time”.