In a way it seems that the opening of the new One Hundred Shoreditch hotel marks an awakening for hospitality in London.

Spring is in the air, Covid less so, or so it seems, and the city of London is gradually getting back to how it was back in 2019.

Shoreditch and Hoxton are home to creatives and technology businesses, and it is here that we have seen a post-Covid rush to return to the office where ideas can be shared and nurtured in a communal environment.

One Hundred Shoreditch is geared to accommodate those with a desire to meet and work together, be it for an hour, an afternoon, a full day or for longer.

And with six bars and restaurants, including a takeaway service and café the hotel meets the needs of its community very well.

The building was purpose built as a hotel and opened originally as the Saint Gregory Hotel in 2004.

Soon after it became a Crowne Plaza and then was relaunched in 2013 as the Ace Hotel.

In that guise it found its fame.

Ace was a design led hotel aimed at the young twenty-something market.

It was popular, not least for its ground floor public spaces where anyone could drop in, plug in and work for a few hours for the cost of a cup of coffee.

The bedrooms at the Ace hotel resembled student apartments; they had low level futon style beds, retro record-players and guitars hanging from the walls.

They were fun but not suited to all tastes.

Now, two years on, the hotel has grown up and appeals to slightly older guests.

Ones with a bit more money in their pockets and a desire for a more comfortable experience.

Now the hotel is operated by the Lore Group and is their second London hotel: Lore Group also operate Sea Containers London hotel on the south bank of the Thames (formerly the Mondrian) which, like One Hundred Shoreditch, is owned by Lore’s parent company, Global Holdings Management Group.

The Shoreditch property continued to operate under the US-based Ace brand until early 2020, when the decision to end the management agreement and run it themselves was taken.

And so, One Hundred Shoreditch is born, rising from the ashes of Ace and Covid.

A new beginning and a fresh look. 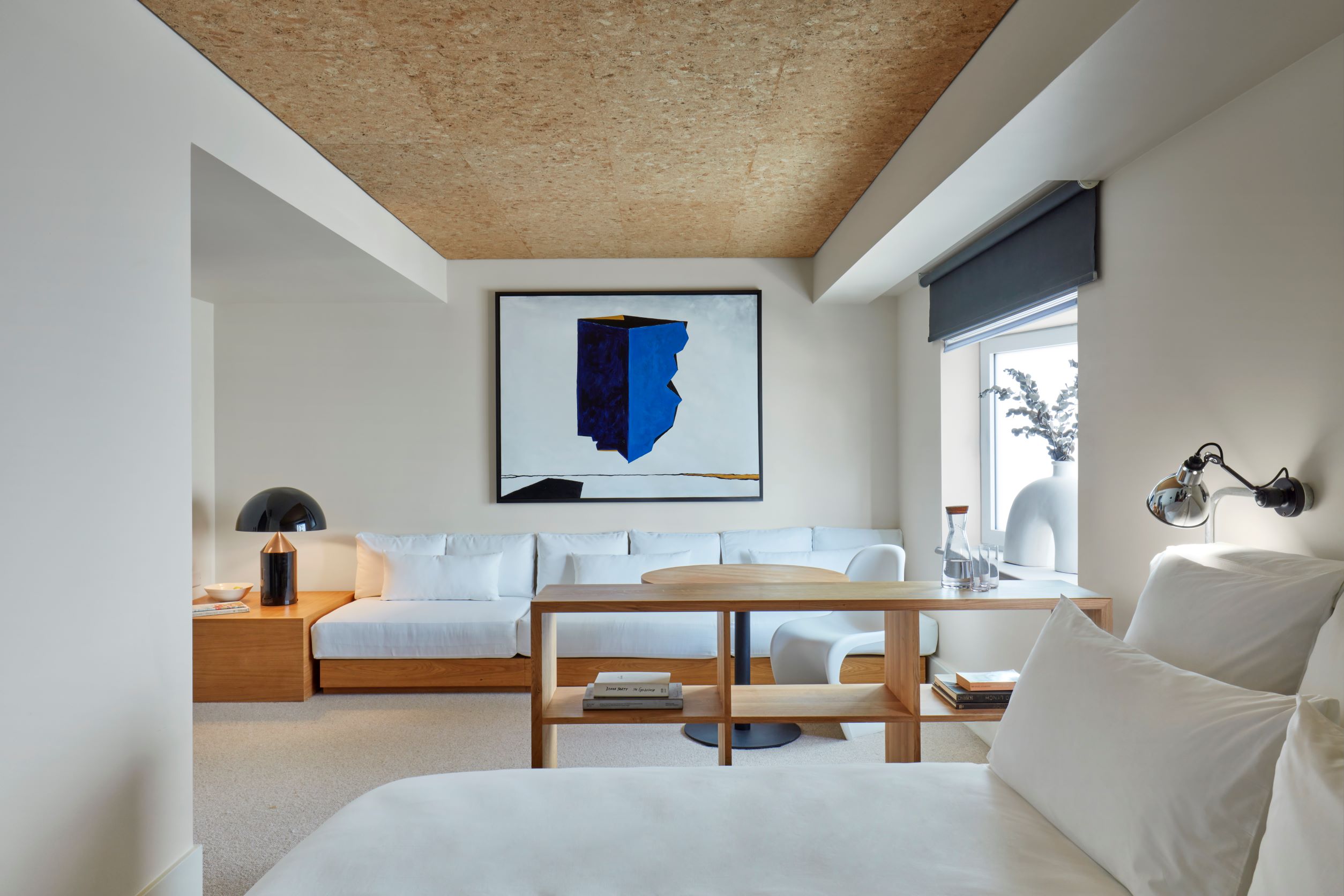 To improve the exterior and provide more internal light to the bedrooms a series of oriel extensions have been added that run vertically from the first floor upwards.

From the outside these add character to the previously monolithic façade and from the inside they provide forty-eight of the hotel’s bedrooms with new bay windows.

These all-glass floor to ceiling oriels are perfect for guests to sit in and watch the world of Shoreditch trundle by below.

Lore’s design team, led by Creative Director Jacu Strauss, have spent the past two years working on the interiors, retaining much that was good about the Ace hotel but adding layers of maturity and polish where necessary.

A prime example is in the bedrooms.

These rooms are now more comfortable and suited to a wider audience.

The bathrooms in most of the rooms are the same, the black and white theme has been retained and the ceilings in the rooms are still painted black, highlighting the exposed steel casing for the lighting and electrics. 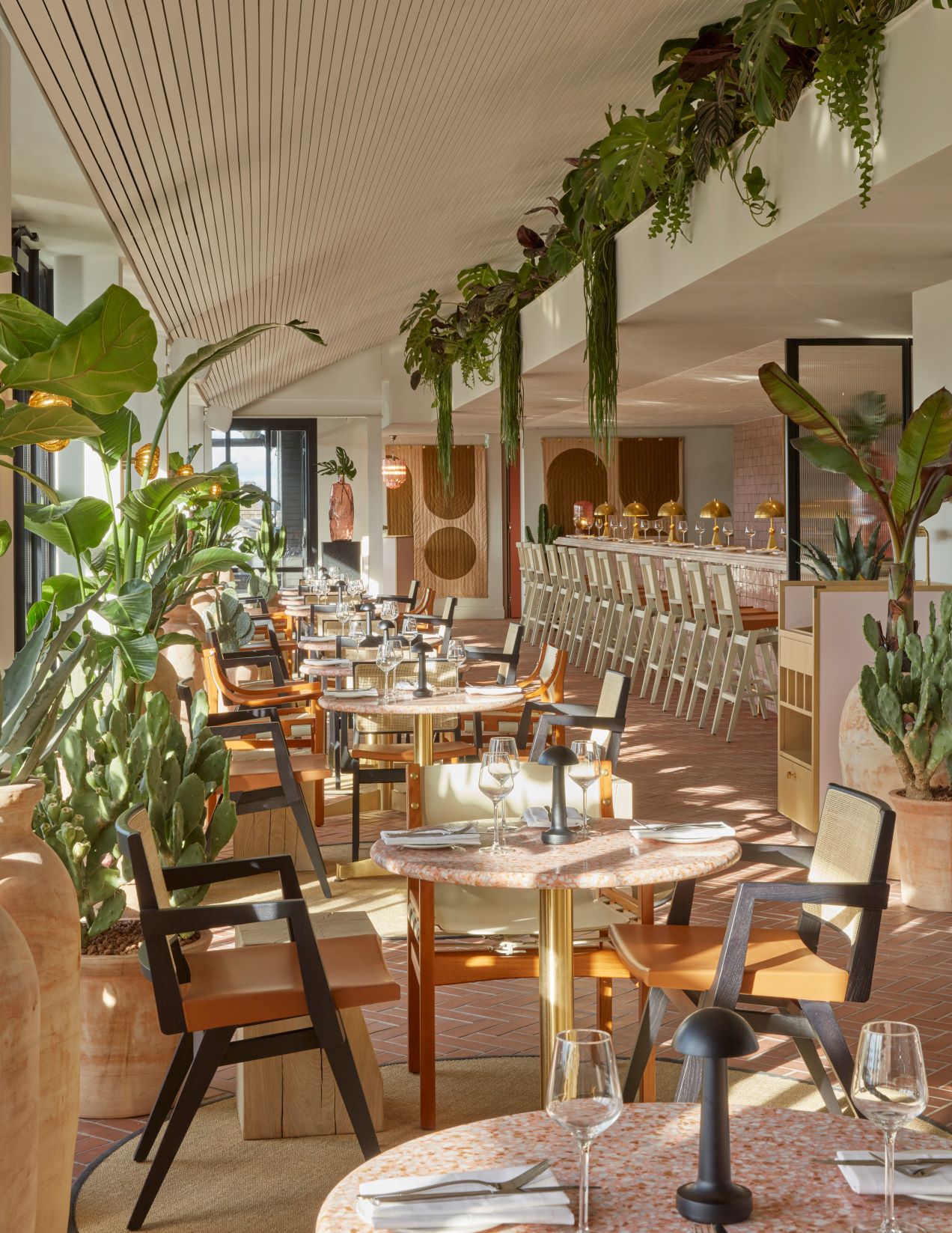 On the top floor, the original rooftop bar has been given the Miami beach look with dusty pink surfaces, white wooden bar stools and floods of natural light.

Large terracotta planters containing tall dessert cactus plants are arranged in clusters here and there and yet more exotic greenery cascades from the ceiling.

When the weather is warmer, and the doors are open wide with access to the balcony this space is certain to attract large crowds.

Beyond the bar is a large events space called The Hundred Room which benefits from floor to ceiling windows with views across the City.

This space, like the rest of the hotel, is excessively cool.

Where else would you find wall art in the form of a full-size unfolding parachute or chairs replaced with modular tan leather cubes and blocks?

This unconventional concept encourages a less formal approach to gatherings and events. 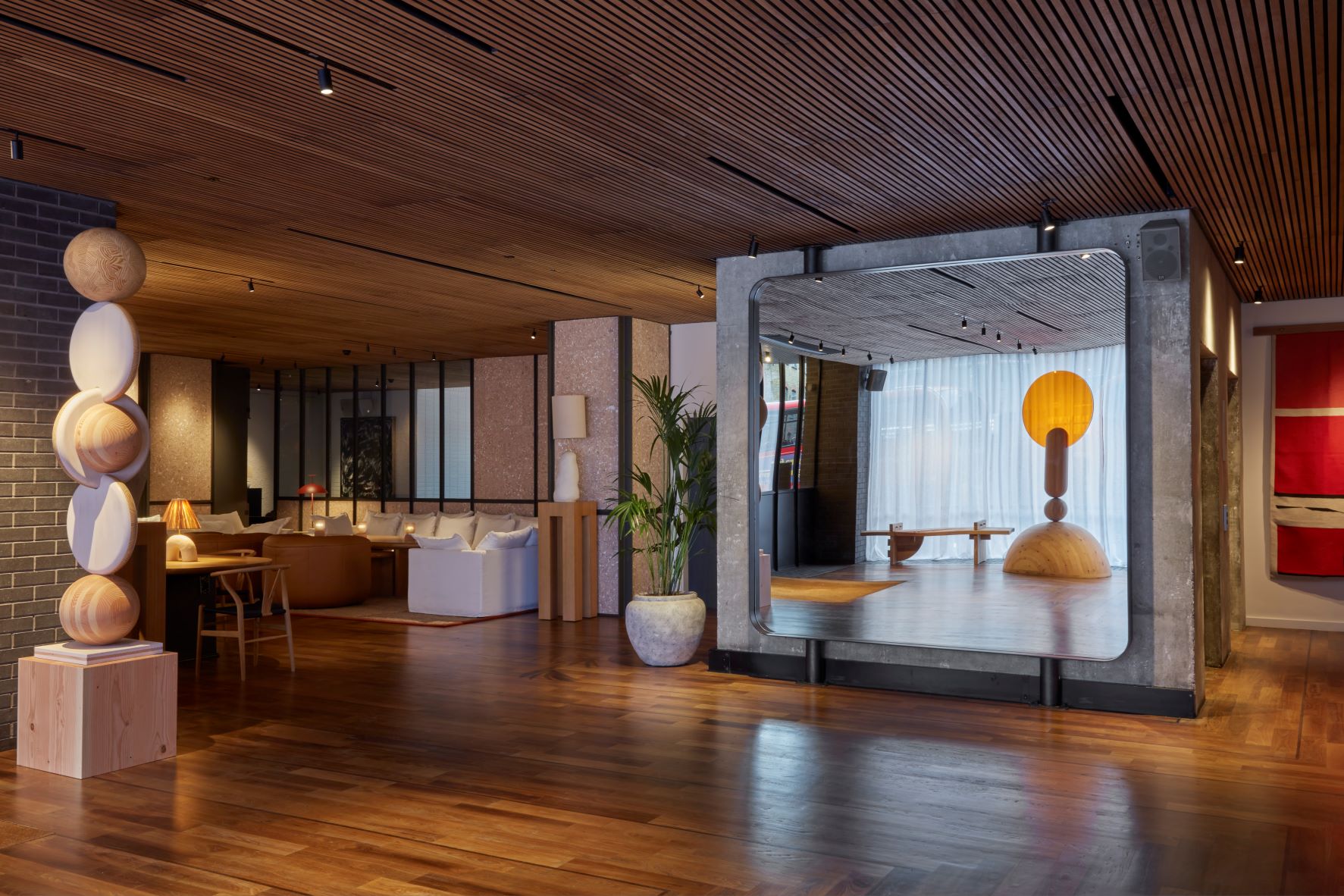 To the lobby Jacu Strauss has added several art pieces including some large wooden totems, created by Jan Hendzel Studio, and based upon Strauss’s design.

These provide the space with an artist’s gallery feel and are excellent talking points.

The original reception desk from the Ace hotel remains but a few added squares of coloured Perspex fitted into the front give it a slightly fresher look.

To the rear of the lobby stands a large, wall sized mirror which reflects more light into the space and effectively creates the illusion of a larger, busier area.

The lobby leads into a broad corridor where the hotels’ main lounge is situated.

Facing this is the same long communal table left over from the Ace hotel which was, and still is, constantly occupied by a flow of desk-hoppers who obviously enjoy working in the company of strangers.

All the hotel’s ground floor public spaces are open to anyone to use so non-residents, Shoreditch locals and hotel guests are drawn together into a spacious interconnecting series of communal areas that include the lounge, a bar, a coffee shop, and several breakout zones.

Music is ever present with a playlist that gains in tempo and volume and the afternoon wears on.

This change of pace is a subtle reminder that the working day is gradually giving way to those who wish to pack away their laptops and socialize with a drink or two, or three.

Beyond the coffee bar, to the far end of the hotel is restaurant Goddard & Gibbs.

The restaurant has a brand-new interior look with a completely new dining concept.

It is a British seafood restaurant, inspired by England’s seaside towns and fishing villages, with a menu that includes a raw bar, starters, mains, and puds with ingredients ethically sourced from local suppliers.

The seaside theme is also evident in the restaurant’s design.

A row of yellow sand-art pictures adorns the walls, surrounding the space: large lampshades float down from the ceiling like luminous jellyfish, and in the centre of the room a large yellow painted art piece depicting a stack of random items that one might find washed up on a beach, balance precariously upon a dense heavy rock.

As in the lobby, the items stack up like a totem and this repeated concept helps to bring cohesion to the various parts of the hotel.

Other art pieces that offer continuity to the hotel’s design include the hanging tapestries that appear in the upper floor corridors and in the bedrooms and the large abstract paintings, all original and all created by Jacu Strauss.

These are hung in every bedroom and even on the walls of the hotel’s lifts – from six originals over two hundred hand-painted editions were made. 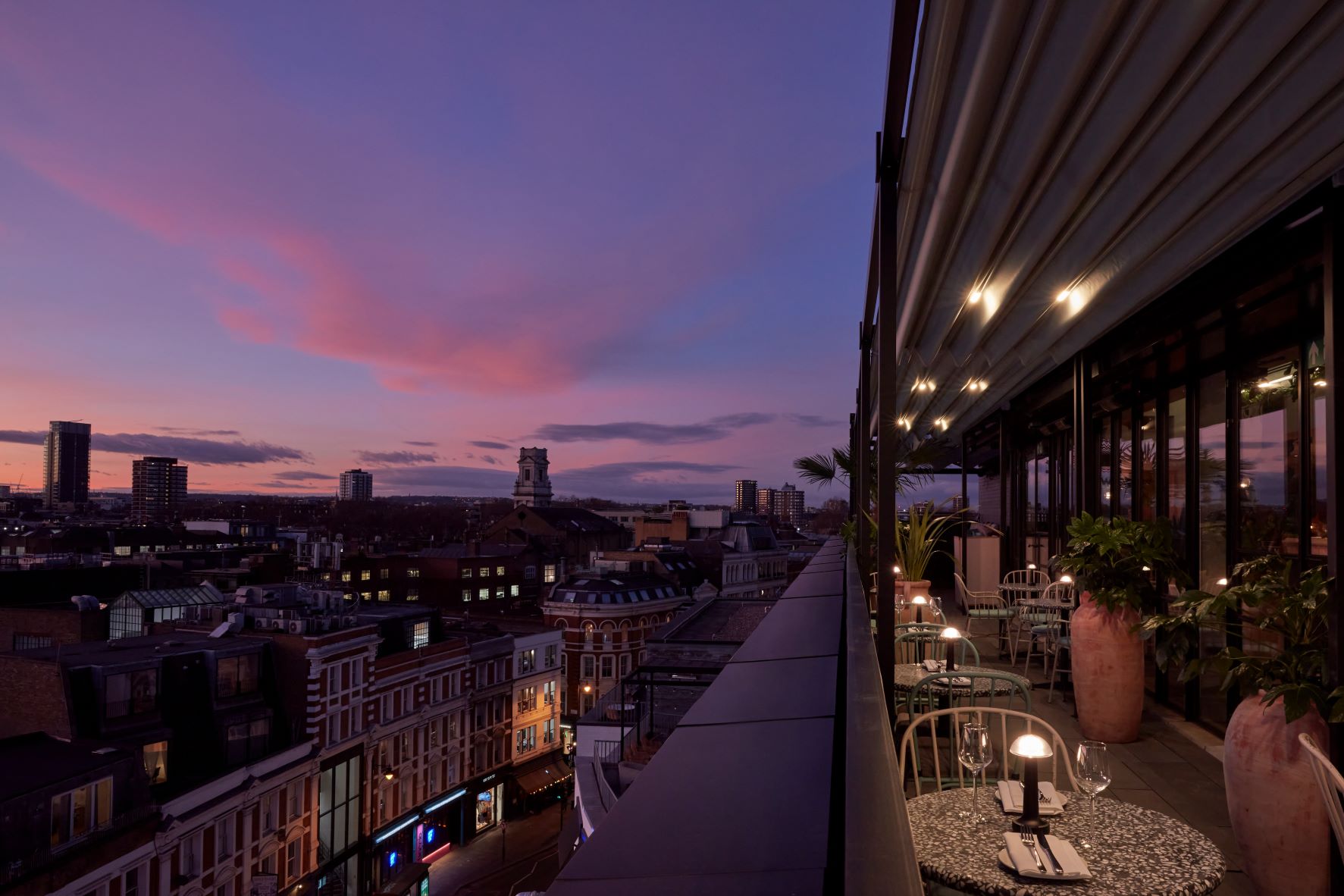 Many of the hotel’s employees have no prior hotel experience.

The idea was to select people based on the strength of their personality alone and what they could bring to the hotel in terms of character and flair.

Over 17,000 applications for work were received to fill just 250 vacancies.

This approach may be to the hotel’s advantage.

Since Brexit there has been a shortage of trained hospitality staff in the UK so by casting the net wider, selecting people without direct experience but with a willing attitude, they should have no problems getting staff in the future.

What will make this hotel unique and successful is the sum of all its parts, not simply the design.

The service, the pricing, the design, the comfort, the restaurants, the bars, the management, and staff, from housekeeping to front of house.

As Jacu Strauss says, “It is a design hotel, but we do not see design as being more important than anything else.

“Everything has equal billing – that is how to make it work.”