In the hospitality industry, photographers are not there to help sell an essential product – none of us need to stay in five-star accommodation or eat in fine dining restaurants – they are selling a perception and a lifestyle choice.

For Richard Southall, owner of Emphasis Photography, one of the most sought-after restaurant and bar photographers in the industry, the key to good photography is understanding what the client wants. What the client is trying to say about the brand and its ethos. Richard believes that his images should convey that message within a five second glance. “People will make a judgement straight away” says Richard. “Our job is to ensure that judgement matches what the client wants people to feel about the brand”.

On any shoot, Richard will try to arrive early so he can “take the photos in my head” before setting up his equipment. In general, he tries to get the shooting done within a relatively short time frame, often out of necessity, and most of his time is spent back at his studio checking each shot for imperfection, lighting, shadows, reflections in glass or steel, people in the way, and so on. There are usually hundreds of shots to go through before presenting a limited number to the client for final selection.

Copyright of photographs is essential to avoid unauthorised use of images. “It is often thought that we copyright our pictures just to ensure that we continue to get paid every time they’re used.” says Richard. “But the main reason is to protect the intellectual property of the client. The image is there to portray the brand in a positive light. In the past we’ve had issues where our images have been used by newspapers giving poor reviews of the venue, so the perception becomes negative. So even when a poor review is unjustified, or just about an issue with service or food, the image becomes a part of the negativity. This is very unfair for the client who has paid good money to be portrayed in a good light”. Copyright helps to ensure that images are only used with the prior permission of the owner, which gives clients the upper hand.

Below is a selection from Richard’s portfolio. We have asked Richard to provide a short description for each.

This shoot was undertaken on a July morning at approximately 3.30am. The client wanted a dark blue skyline, as opposed to a brown sky which usually results from shooting images at night, where sodium street lighting reflects up into the sky and casts the sky brown. So, the shoot had to be undertaken just before dawn. The added complications were that the restaurant had to be reset and cleaned after last service at 1pm. Also, Green Peace protestors chose that morning to launch a protest at the Shard, by free-climbing up the glass facia – passing through shot.

The client wanted an iconic shot using the old power station stacks but also including the new apartment, which had been built on the roof of the structure. A dusk shot was opted for, to give more drama and impact to the image. The weather leading up to the shoot had been very overcast but cleared, against all expectations, 20 minutes before the image was taken. The image was deemed a great success and was subsequently used in the Mail on Sunday, the Daily Mail, the London Evening Standard, The Guardian, the Metro and even the New York Times.

Casinos always present challenges, especially when they are regarded as ‘high-roller’. Usually there is a small window of time in which the images can be taken, normally between 4am – 8am when most of the clients have left and the cleaners come in. Cleaning of the area is critical to the success of the image and invariably the photo team assist in helping the casino staff in prepping and tweaking the scene.

A difficult shoot with a very short timescale in which to set up and take the images. I had to wait for a time slot over a three-week period, for a time when a high-roller was not at the casino, and I was eventually given just two hours to take the image, including dressing and styling.

This shoot was undertaken for the lighting designers and they wanted to capture the scale and majesty of this historic project. During our three-hour recce prior to the shoot, which lasted over three nights – it was discovered that we could still gain access through various ladders and old staircases to the original ‘gods’ viewing platform in the domed ceiling. The image was set up over an hour, with the customers being asked to step away from the tables during the two minutes the images were finally captured. The only people visible are the croupiers who had to stay due to the high value of chips on the tables.

This was commissioned by the contractors who wanted a shot to encapsulate the brand of the restaurant combined with its position in the London skyline. This was a rare shoot in that the end client decided to postpone the opening of the restaurant by two days to enable the photographer and other marketing people to gain the best possible publicity images prior to the soft opening. 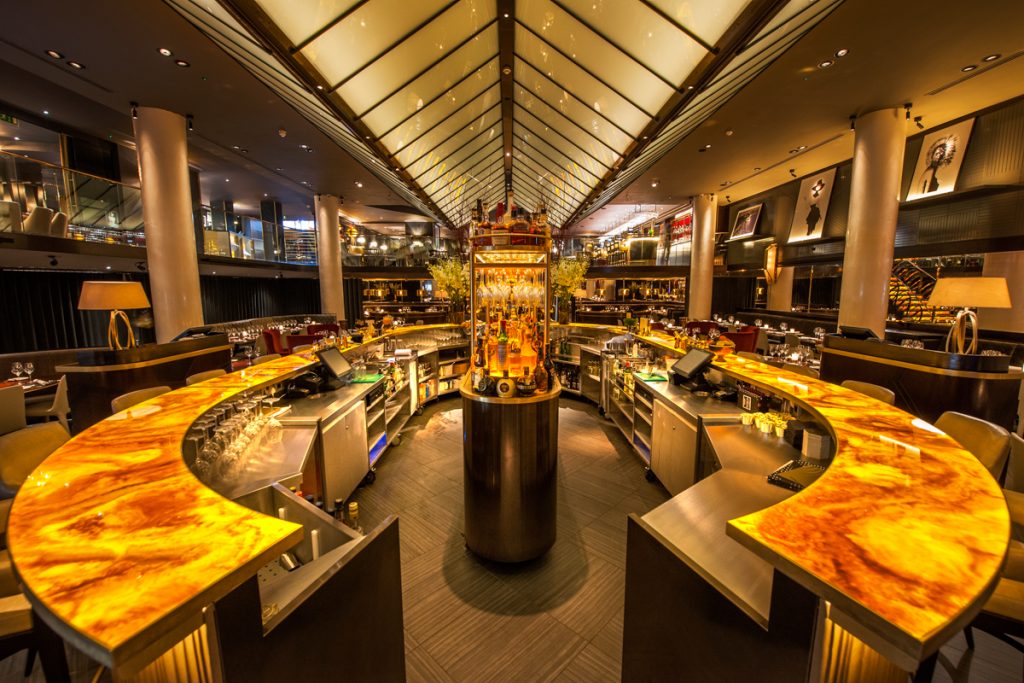 This image was produced for the bar fit-out company and had to be taken between the end of lunch service and evening service. Dressing the shot was important to show how well their products helped the efficient running of a bar in a prestigious venue. Controls of lighting levels were key so that the atmosphere of the restaurant could be maintained but still have the optimal effect on their products.

Having photographed the other restaurants in the chain, it was key to maintain the same air of luxury and brand consistency through these images. Night images were essential as this reflects the restaurant’s main trading period. Images were produced after final service and with the help of the restaurant’s staff, who were wonderfully helpful and efficient, the images were completed in a short period of time, and with a minimum of fuss.

This was part of a complete branding project for the whole complex, which incorporates a hotel, several restaurants and various leisure facilities, with an emphasis on luxury and opulence. Styling and attention to detail was vital to the success of the images and client liaison and participation in the shoot was the key to its success.

The aim to this shoot was to capture the flavour of a Japanese spring with the installation of a sakura blossom tree from Japan. Again, it was decided that the best time to shoot the venue would be at night to retain the atmosphere – after last service.