Architect and Contractors in unison

The Grand Hotel Cervino is a five-star hotel with an extraordinary continuity between the interior and exterior spaces: “This concept”  architect Mariapia Bettiol di Aosta says, “was one of the starting points of the project, fundamental, which we thought about from the beginning”.

The architect worked on a particular area, narrow and long, with a constraint regarding the body of the building and proposed to realize a structure that would take advantage of the view of nature both in front and behind with the impressive and spectacular presence of Matterhorn.

The objective was to create simple volumes from a large starting volume that was split into smaller parts to recreate the idea of a mountain village.

Indeed, this structure is reminiscent of the neighbouring village, a very traditional complex whose original forms it takes, while gracefully modernizing it. 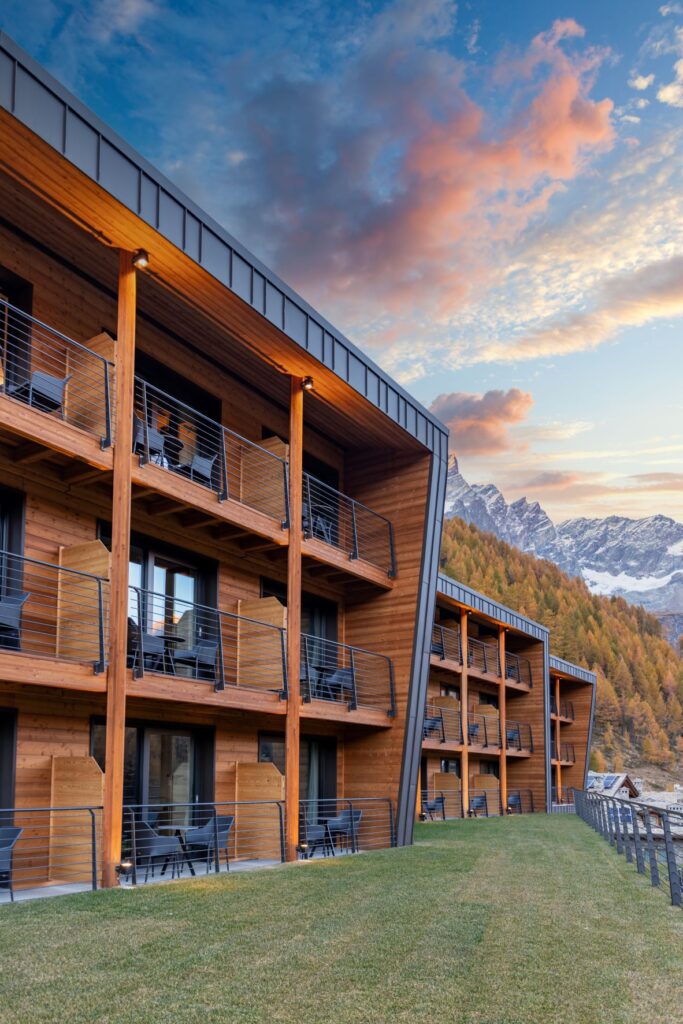 The three bodies into which the original structure is divided rest on the basement foundation of what was a large garage that goes right into the mountain, causing nature to envelop the three volumes that insist on the stone foundation. 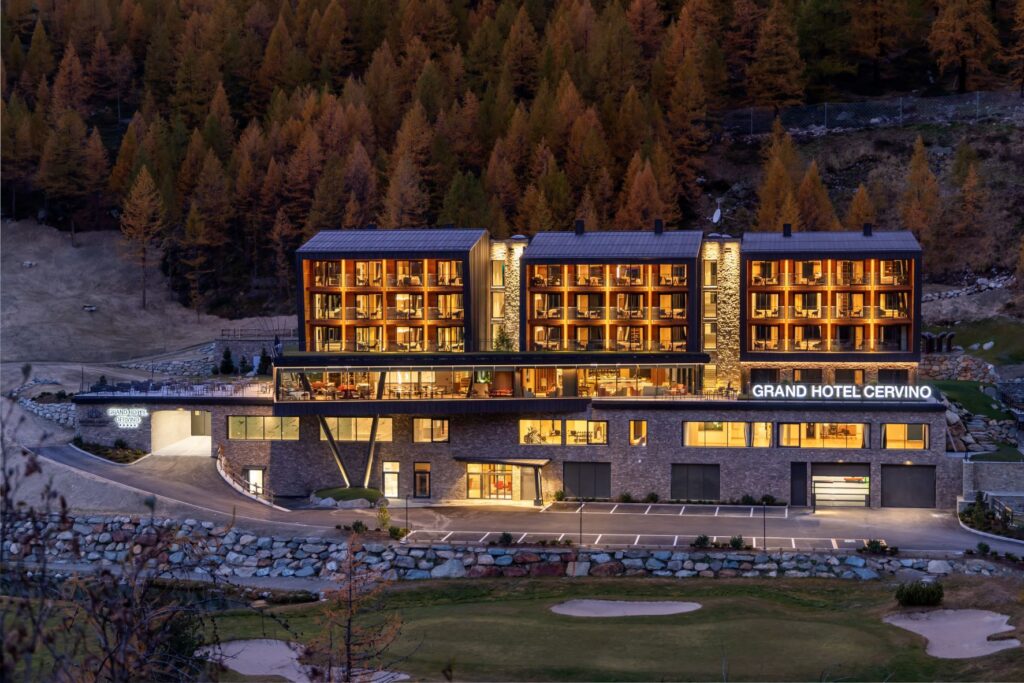 The new structures resting on the basement complement the nearby pre-existing structures with a special added value determined by the view of a golf course and, of course, the Matterhorn pyramid.

And it is precisely the Matterhorn that, in the suites, is framed by the windows as a real and changing picture in the hours of the day.

This immersion in mountainous nature is also accentuated by exterior cavities that create crystal pools used as winter gardens, visible from the inside, which still bring natural light into the building, detracting from the important ground-level footprint of the basement areas, generating, moreover, a surprise effect that guests do not expect.

The pre-existing building was a rather dilapidated and water-logged garage, so it was demolished entirely, while a spring was carefully tapped and reused within the building itself. 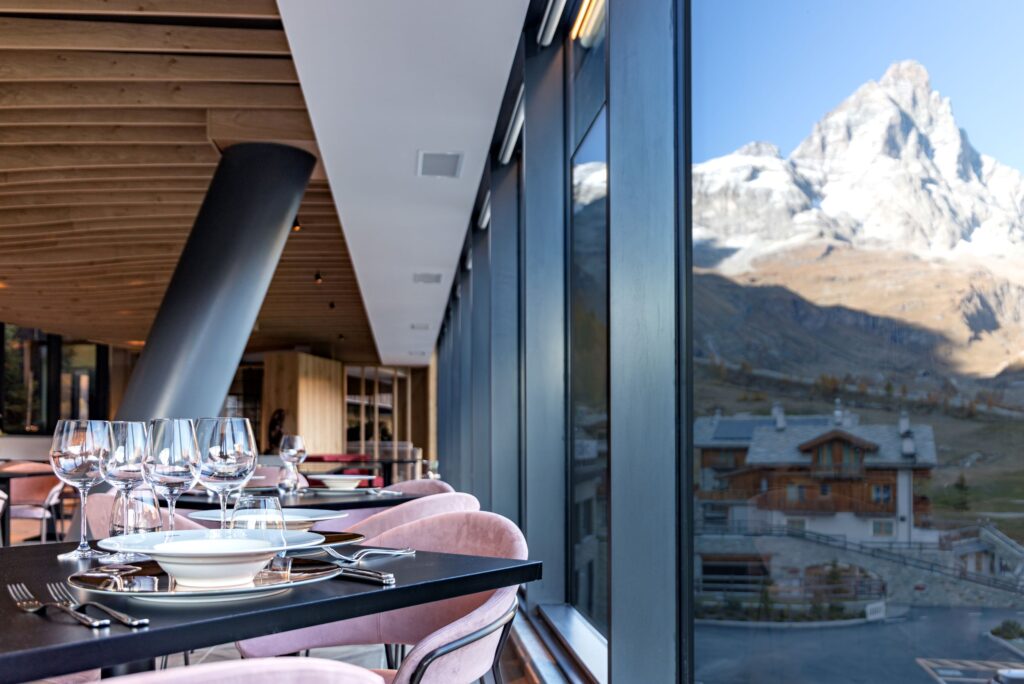 Another key aspect of the design is the fact that the building was to be ready in about nine months, although the incidence of Covid led to almost four months over the deadline from start to finish, so everything was designed to be done quickly with closure of the work as soon as possible.

The idea of replicating these bodies, separating them, also stemmed from the need to finish all the work in a short time.

Cement was used only for the basement floors while from the ground floor to the top X-Lam was used, in collaboration with Wood-Beton. 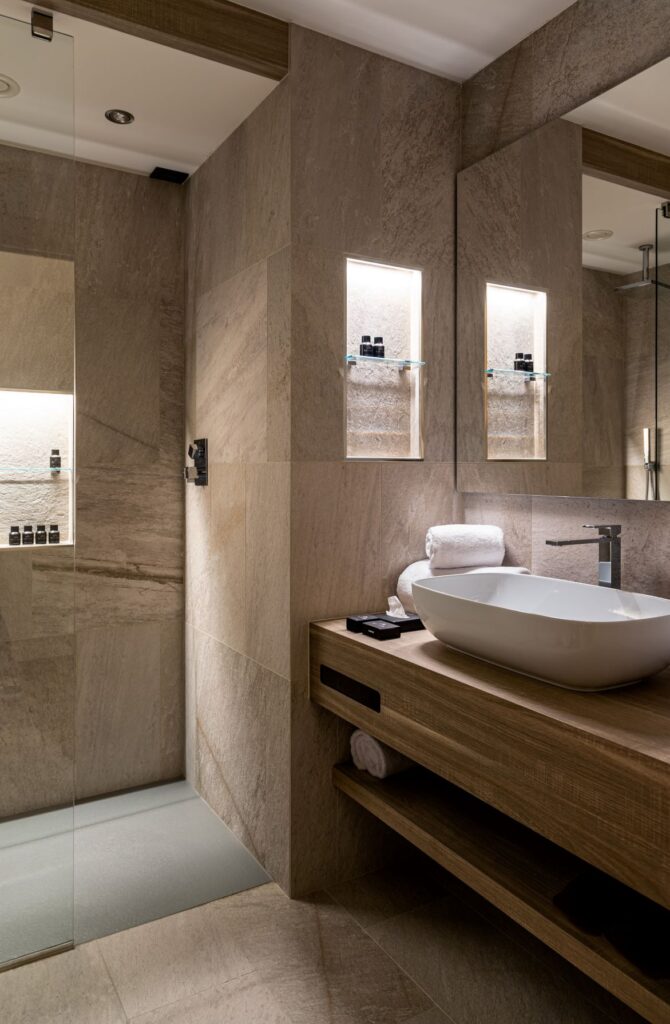 There was a great deal of design work by all those involved, coordinated by general contractor ViCO: suffice it to say that the bathrooms were built as individual units and inserted into the structure already furnished during the assembly of the individual floors.

Architect Bettiol emphasizes, “Concreta was fundamental in achieving these results of precision and timing in that phase of the work that follows the construction part and where it is generally easy to overrun on time.

“Instead, Concreta’s constant presence and extreme attention as a contractor made it possible to achieve the quality and on-time delivery of the project.” 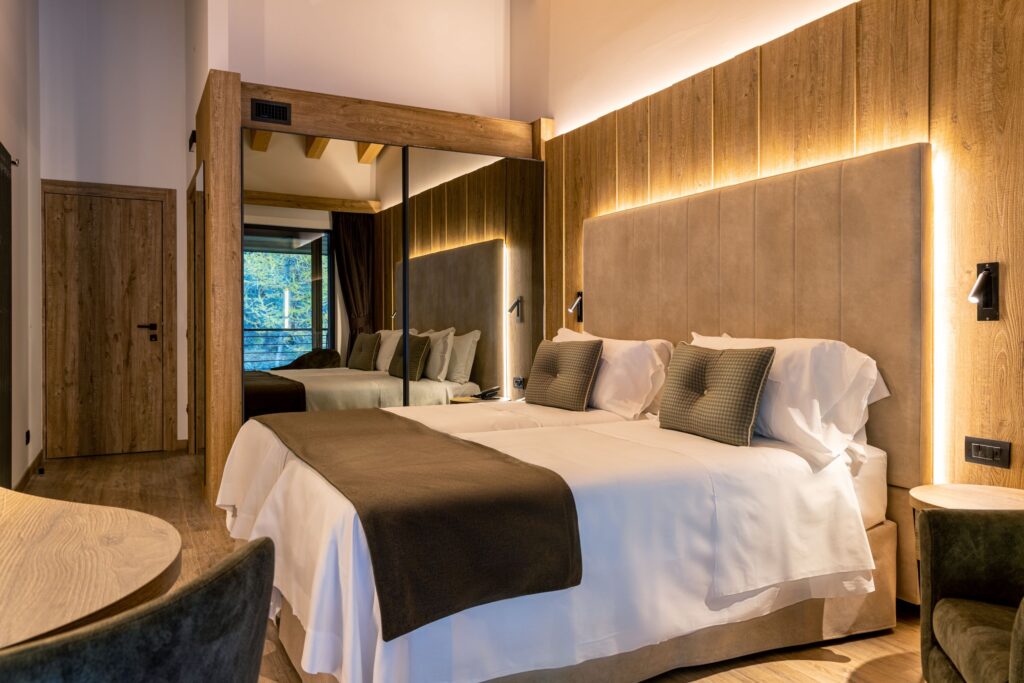 In this hotel the presence of the mountains is very strong on the outside and it was not intended to replicate it unconditionally on the inside, certainly in the rooms there is a hint of the mountains but in the common areas and, in particular, in the wellness areas a very modern cut and character prevail, thanks also to the large glassed-in spaces, which allow the mountain panorama to enter scenically from the outside. 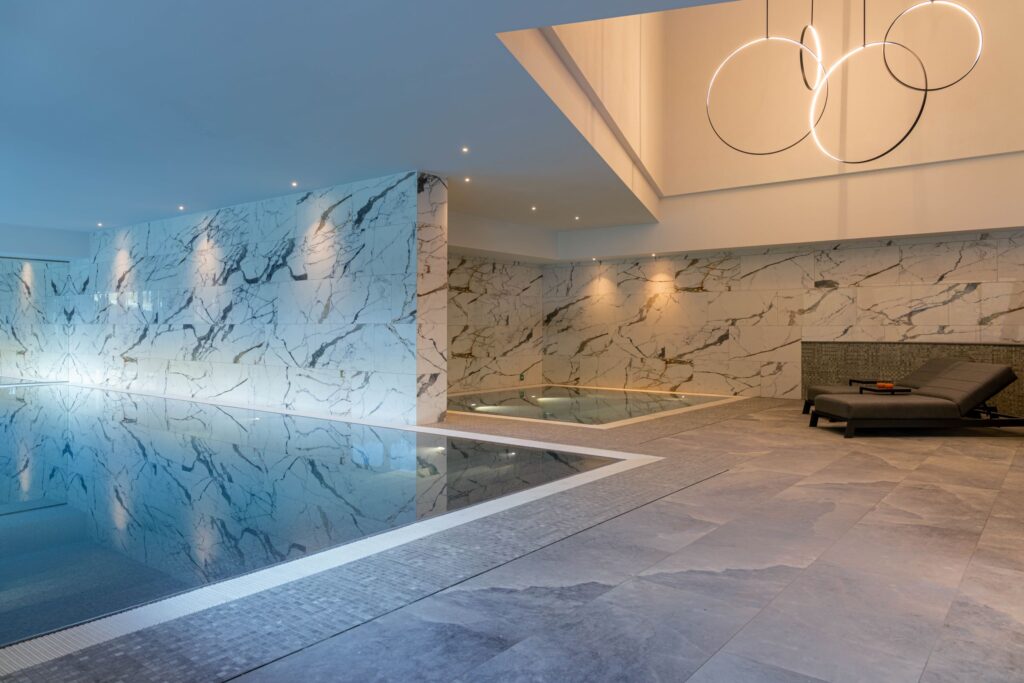 Concreta’s collaboration was expressed in the interior part through a strong combination of architecture, client (ViCO enterprise and Mythos Group) and project, making a successful synthesis between the objectives of the different stakeholders.

The sixty rooms are compact in size, with a strong rationalization of furnishings that allow them to fully experience the required functionality, and in this, Concreta provided valuable cues to achieve this goal.

In the furnishing of the rooms, wood was played with in combination with stone materials.

“The presence of wood” confirms architect Bettiol, “in the scheme is essential to create and preserve an impression of warmth with a traditional and modern mountain slant.”

In the four suites, the sitting area was created in one module, adapting the bed area to the new dimension of the space.

Different is the case with the four spa suites, where the goal was to create a space of extreme quality that maximizes its comfort.

The bathrooms feature Florim tiles in different declinations and create a feeling of well-being and cleanliness.

The wellness space is a real piece of bravura created by the architect Bettiol, who continues the fil-rouge of marble as a sign of luxury by integrating it in the sauna with wood: “The idea is that of the jewel.” says Bettiol, “That is, to embellish the object that could have been rustic with luxurious and valuable materials. 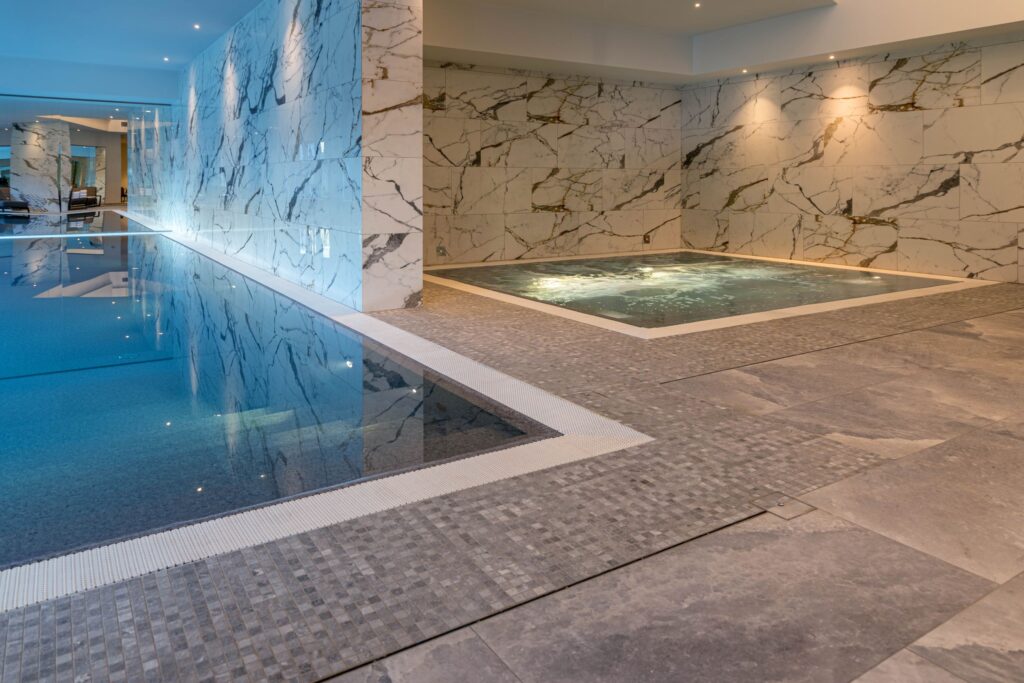 “This path can be found in the pool space where a play of mirrors and the double height of the room that interpenetrates into the restaurant create plays of light with the feeling that the space is lost to the eye.” 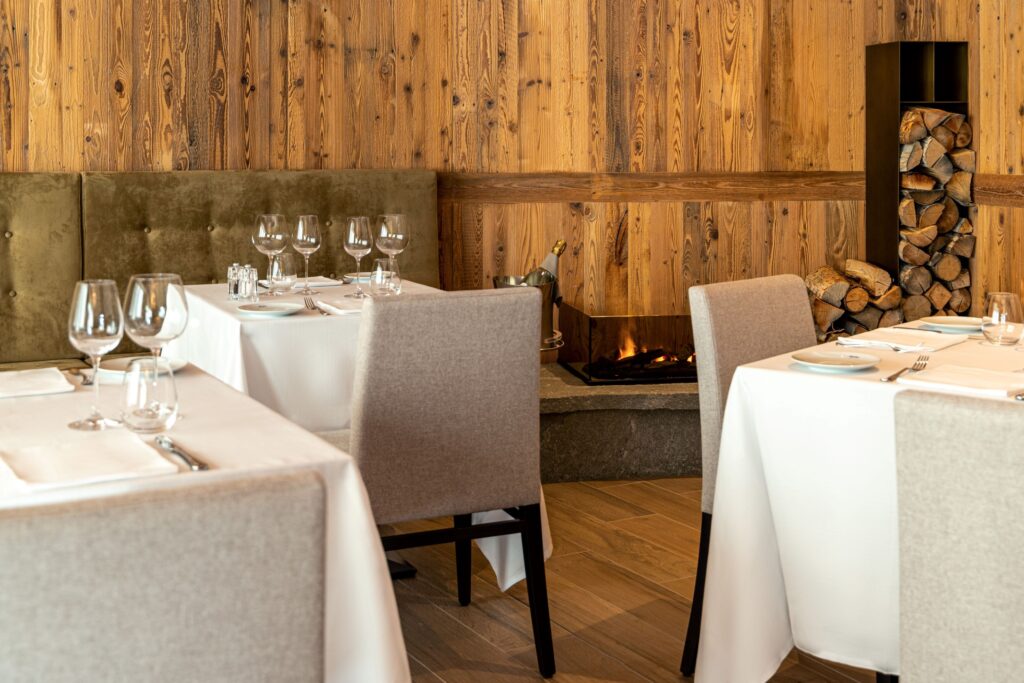 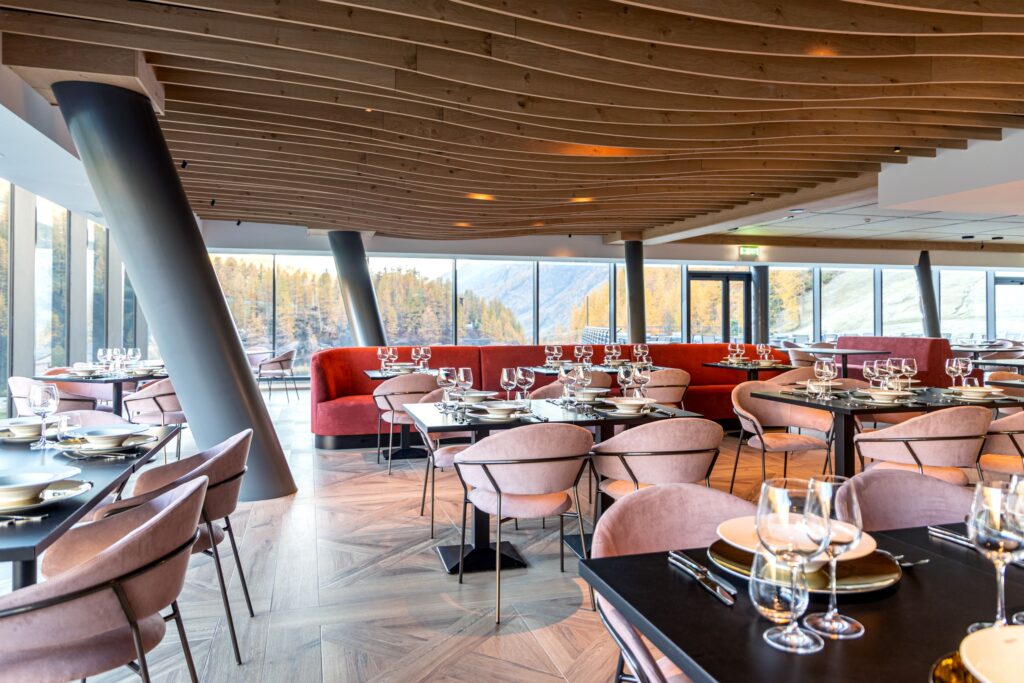 The restaurant space re-proposes the dialectic of the exaltation of light and space with the only exception designed for those who love the concept of the mountain stube, a small room that overlooks the forest and is clad in wood and intimacy detaching itself from the other common rooms marked by modernity, In the small room, wooden beams provided by Concreta are used with an effect wave pattern, which moves the lights and shadows of the room. 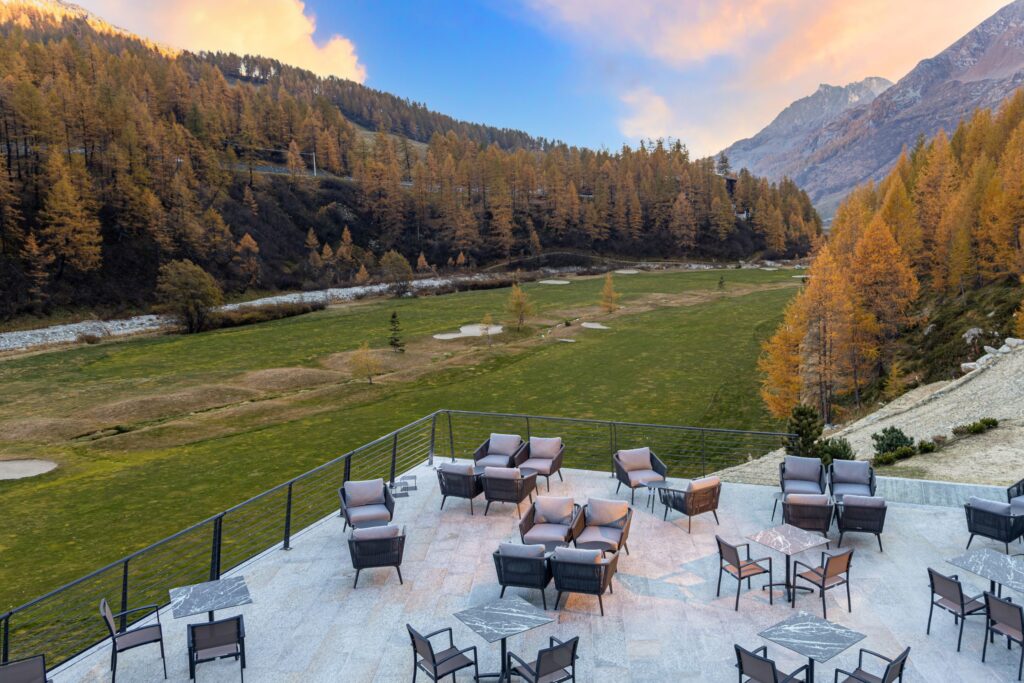 The outdoor spaces are developed on both the front and the back, but it is the large terraces present to the right and left of the restaurant that are highly experienced, while the green areas allow-from the ground floor-to return externally to the first basement level of the parking lot, with direct external access to the reception and restaurant. 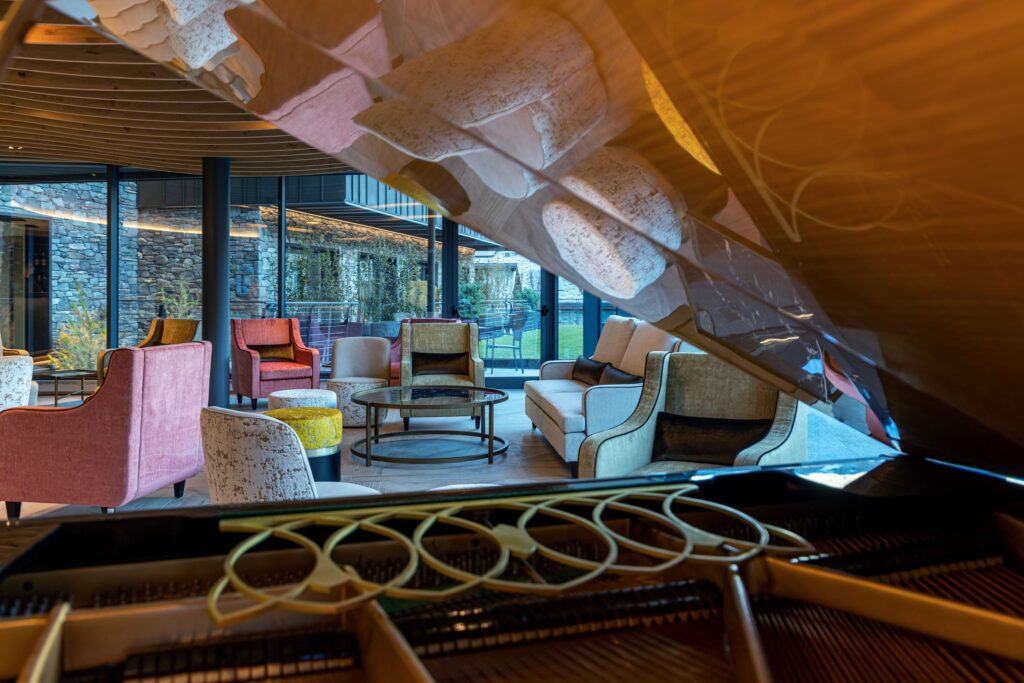 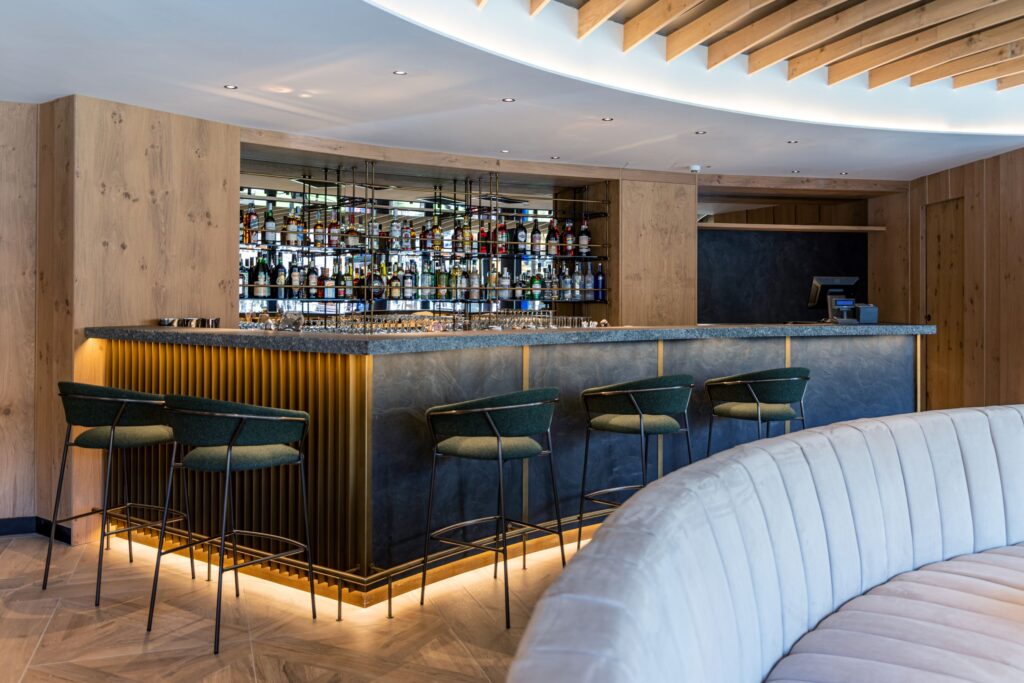 In this project for the Grand Hotel Cervino, the Valtellina-based contractor Concreta has once again expressed its ability to dialogue and interact with the facilities and the territory, to make the most appropriate choices in both furnishing solutions and materials, as well as to rely on the preparation and reliability of its teams, leading to an optimal result, even under challenging timelines, through competent and proactive collaboration with the other parties involved in the work.