It seems that some of the most imaginative, modern, and high-tech hospitality designs are currently coming from the Far East, and from China in particular.

Truly exciting and innovative interior designs of the highest quality, straight from the  drawing  boards of young Chinese designers; many of whom will have grown up in a disciplined and conformist society, which makes their achievements all the more impressive.

This is, I believe, partly to do with freedom.

In recent years China has followed a path of mass urban renewal and development.

New towns and new cities have created opportunities for new design ideas and a younger, modern generation of designers has emerged.

These are the free thinkers, influenced by global architecture and global culture, not just by their own.

And in such an unrestricted and creative environment, these highly trained designers and architects can let their imaginations run free.

Some of the modern design studios are turning out brilliant work.

The following story, written and submitted by Michele Koh Morollo, caught our attention for two reasons.

One, because we have seen other projects from LDH Design and they are invariably worthy of note.

And two, because this fine dining restaurant is housed within what was a Chinese venue of culture, so the designers have needed to show restraint and profound respect to the building and to its history. 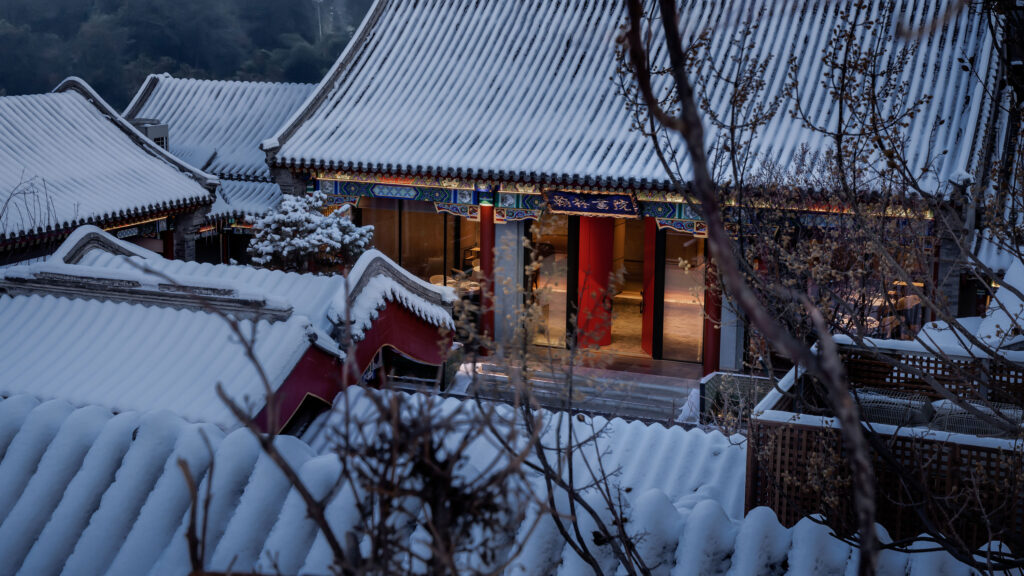 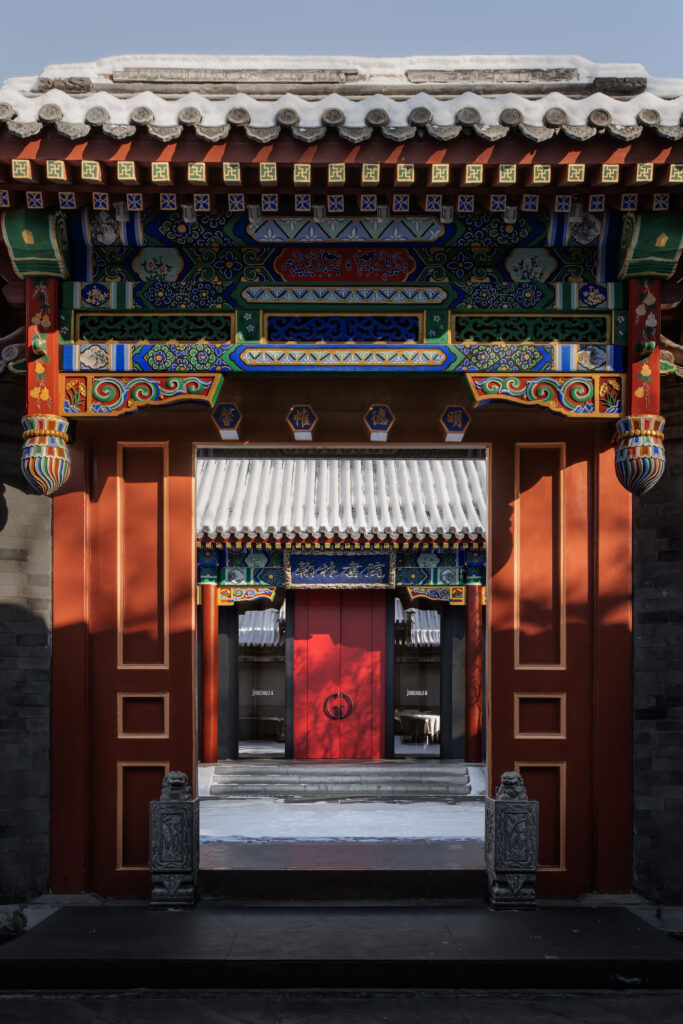 Tucked away near a temple in Beijing’s old town, in a hutong in Dongcheng District, the restaurant is set within a renovated, thirty-year-old, traditional, Beijing style, quadrangular, courtyard compound residence known as a siheyuan.

Formerly a cultural venue called the Jinyang Hanlin Academy, the compound has been transformed by LDH Design into an elegant dining destination that evokes the ceremonial splendour of Chinese imperial residences.

The establishment’s private, indoor dining rooms are available for private gatherings, while its central courtyard is open to the public for afternoon tea and dinner.

If a guest books the entire Mansion, they can use the courtyards for musical performances, cocktail parties, exhibitions, press conferences or other events. 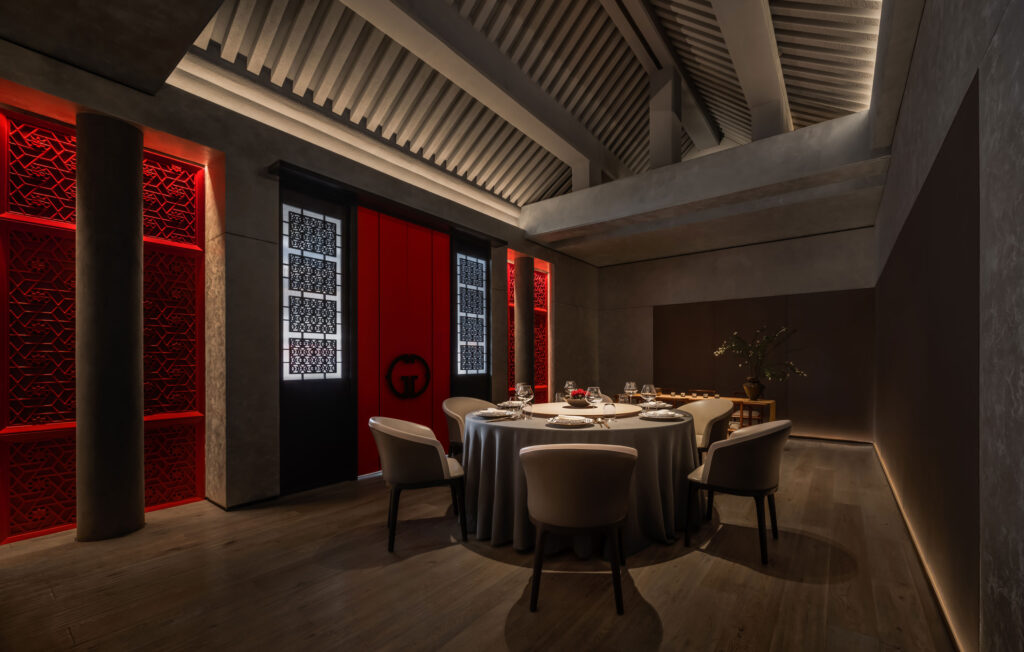 As is typical of siheyuans, the compound has three conjoined courtyards surrounded by a series of chambers with traditional, grey, pitch-tiled roofs.

These chambers are connected by a corridor running through the middle of the compound. 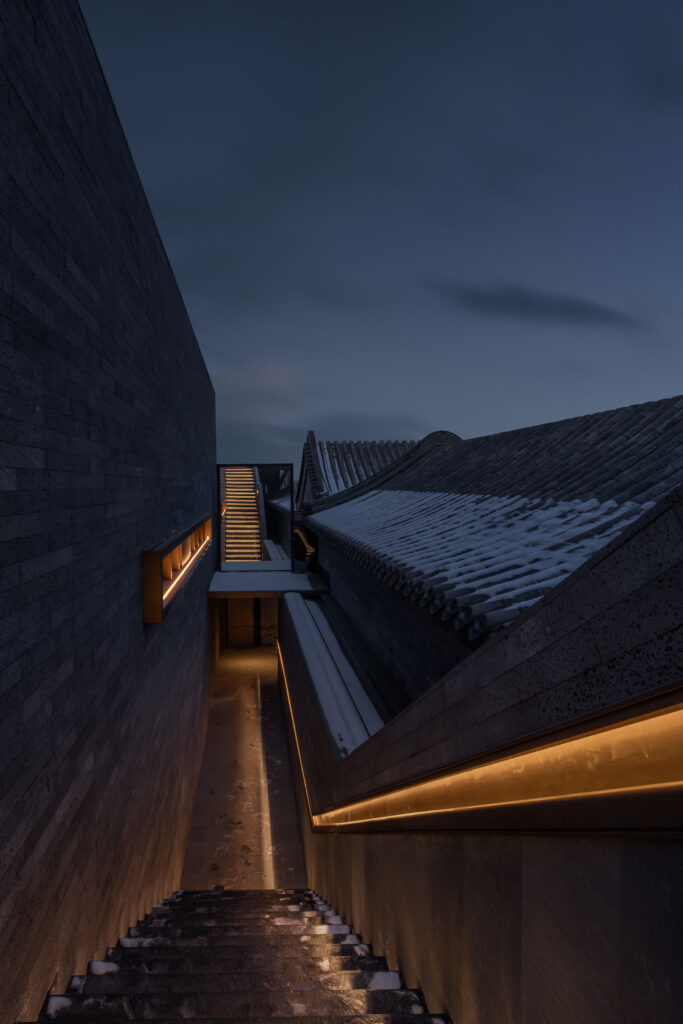 From the entrance, one passes through an archway then a corridor into the first courtyard where marble paving stones set amidst landscaped waterways lead to an open kitchen that is semi-concealed by a bamboo “forest.”

From behind the bamboo trees, guests can see scrumptious roast duck hanging in the display case of the open kitchen.

To the right of the entrance, is a terrace that functions as a three-dimensional viewing platform where guests can look down at the courtyards, the Beijing Imperial Academy, and hutong beyond the compound’s walls, and also take in views of the sky above.

A stone staircase leads up to this terrace. LDH installed mirrors panels on the wall of the staircase landing on the terrace level, so a reflection of Beijing’s old town and the golden roof of the Beijing Imperial Academy can be seen before guests step onto the terrace. 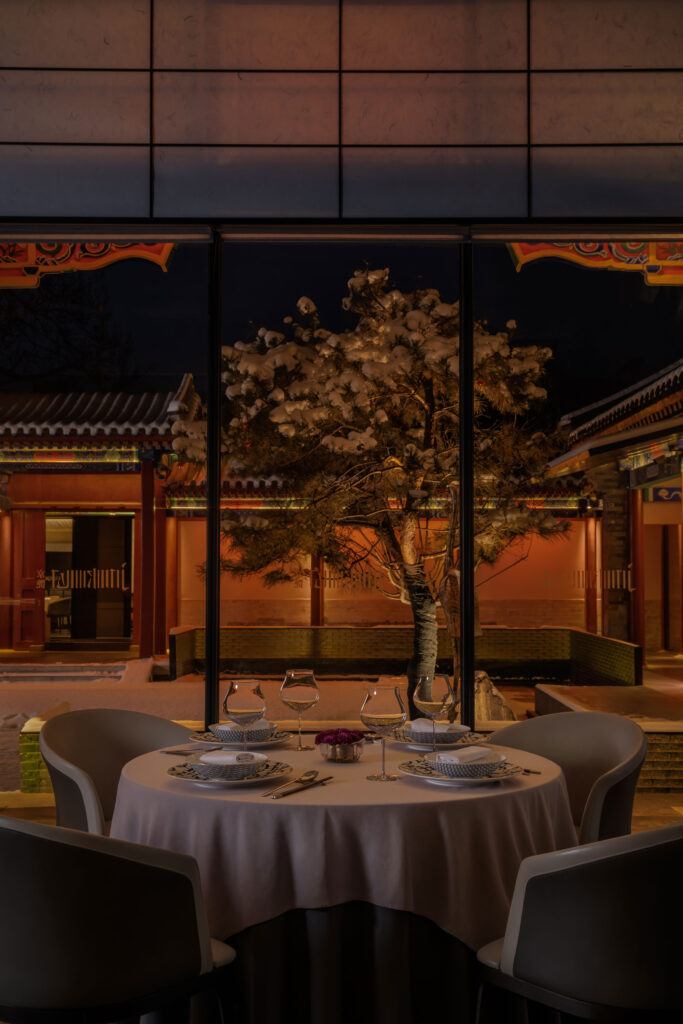 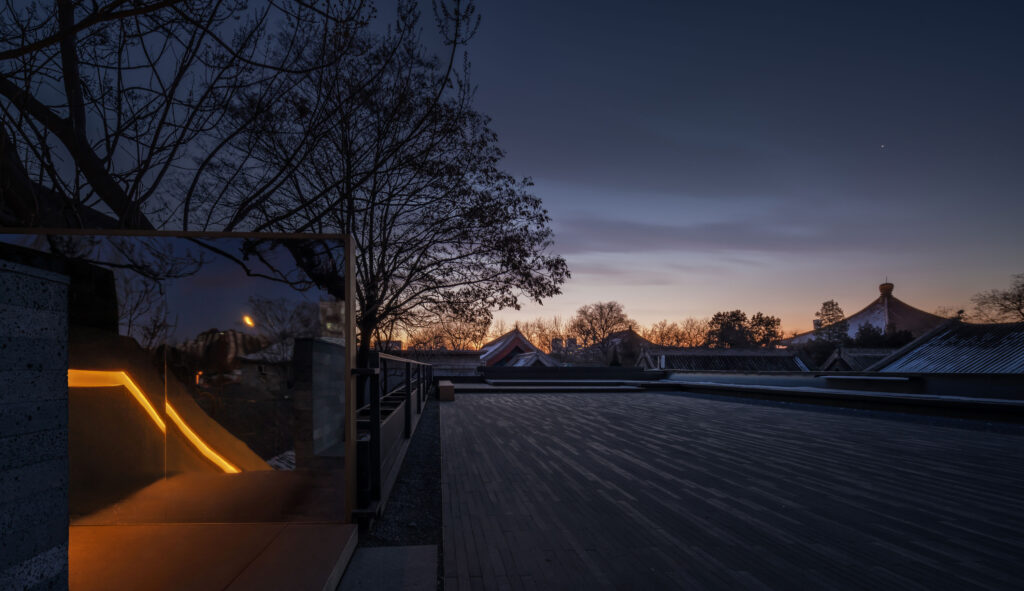 “Architecture is the mirror of life. When you see architecture through the mirror, you can feel a building’s past and its essence. Architecture is also the reflection of social life of a place,” says Liu Daohua, LDH’s founder.

From the first courtyard, guests proceed through a door adorned with flowers, along a winding corridor, towards the central courtyard.

“As a visual prelude, the flower-adorned door is both traditional and unrestrained, inviting people to glimpse the vitality and grandeur of Beijing as it looked a century ago,” says Liu. 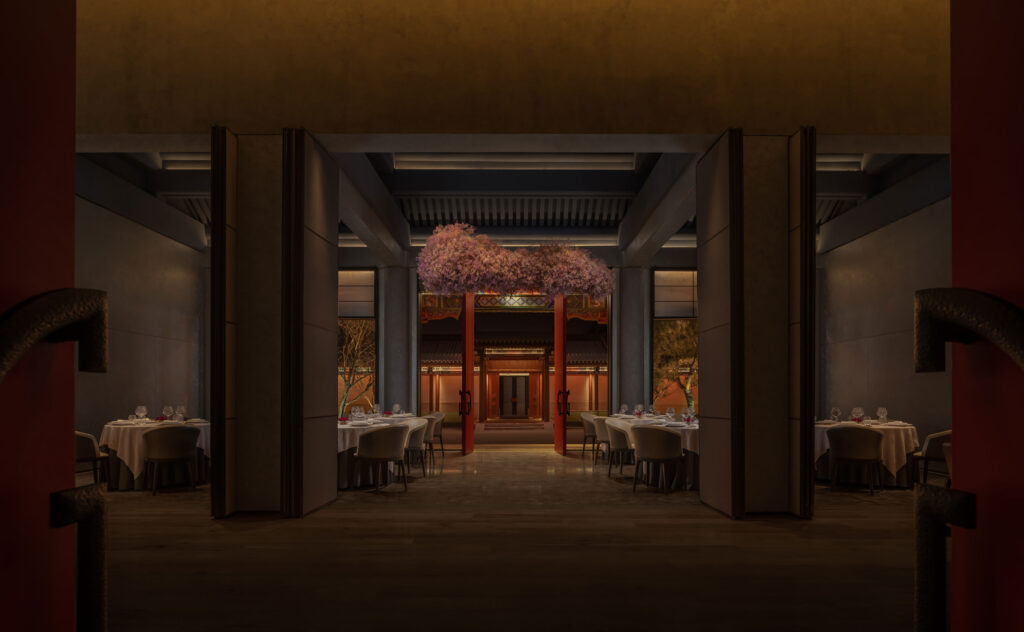 Beyond the central courtyard is the third courtyard – referred to as “the principal yard” – which is connected to a semi-open banquet hall.

The ceiling and upper walls of this hall is decorated in gold lacquer, which together with the grey walls and crimson door posts, create an elegant, contemporary atmosphere.

“We reconstructed the internal tilt facade of this hall according to a contemporary architectural scale and with modern materials,” says Liu.

“On a sunny day, this gilded hall changes with the light and shadow, as if it were breathing,” he adds. 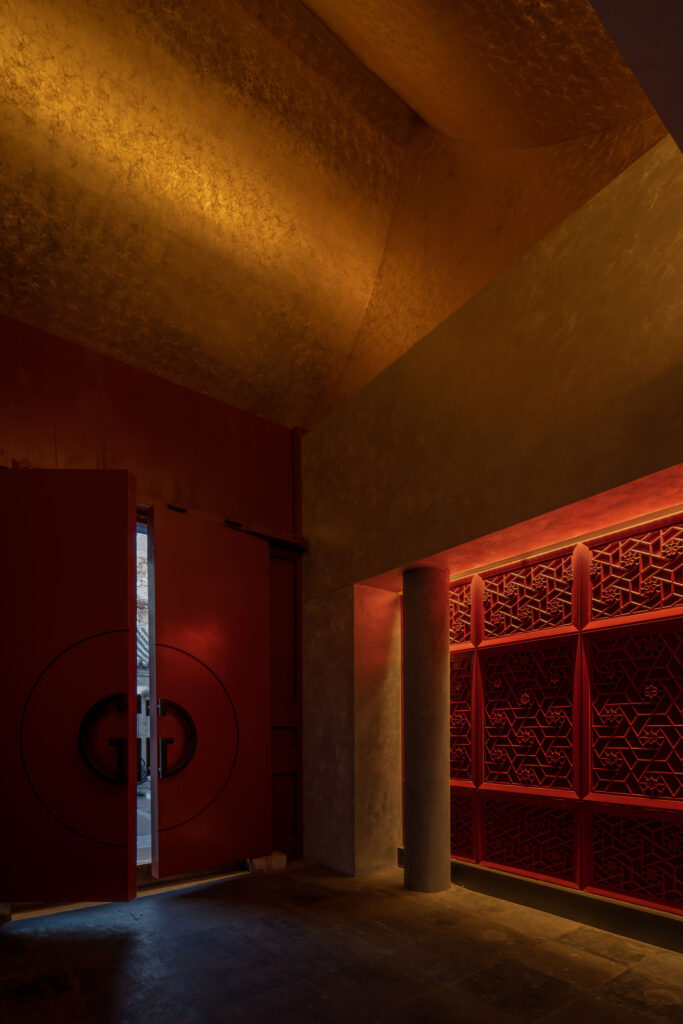 On one side of this banquet hall is a leisure area where guests can relax and chat before or after meals, and on the other side are wine cellars and cigar lounges.

Flanking the principal yard on the east and west are wings that contain private dining rooms – each with their own small garden that looks out to the bamboo “forest.”

Maintaining the architectural integrity of the siheyuan was LDH’s priority, so they removed the dilapidated walls and floors or the original building, but retained the compound’s original structure and layout, along with its existing wells, courtyards, and structural beams.

“We kept the original, coloured drawings on the facade too, and integrated them with the surrounding environment.

“To modernize the space, we installed glass curtain walls along the north and south walls of the main hall.

“This enhanced the visual connectively of the interior program to the courtyards,” says Liu. 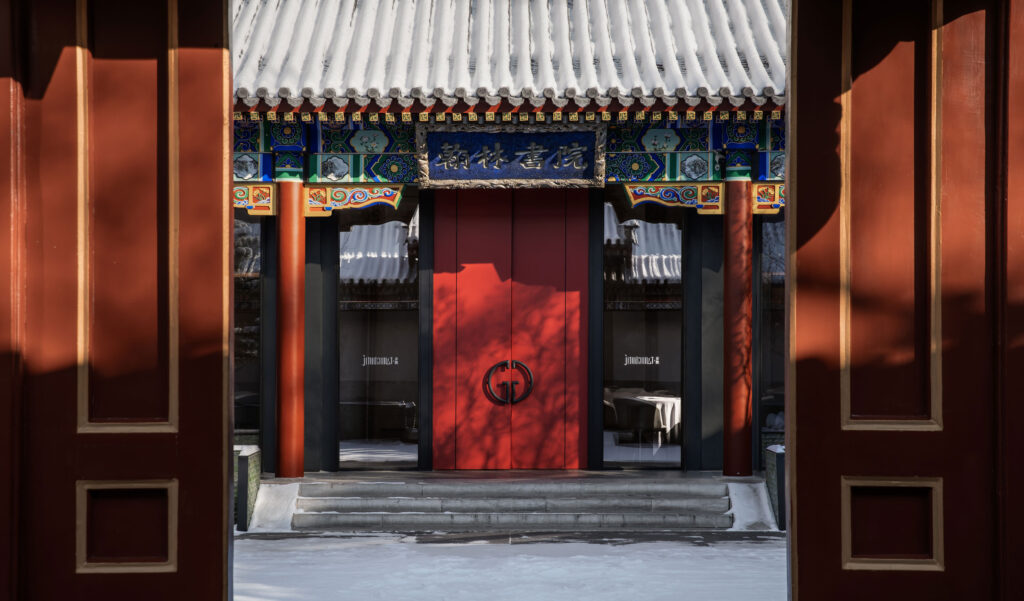 Mansion Feast prides itself in using seasonal ingredients for its changing menus, so LDH kept the existing trees – spring magnolia, summer crape myrtle, begonia, and holly pine – in the four corners of the central courtyard as an homage to the four seasons. 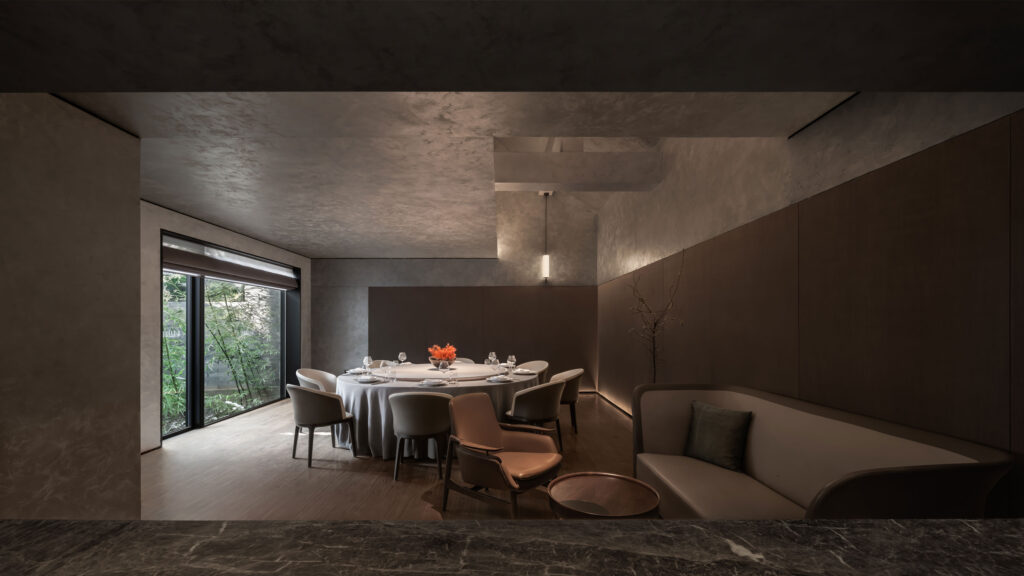 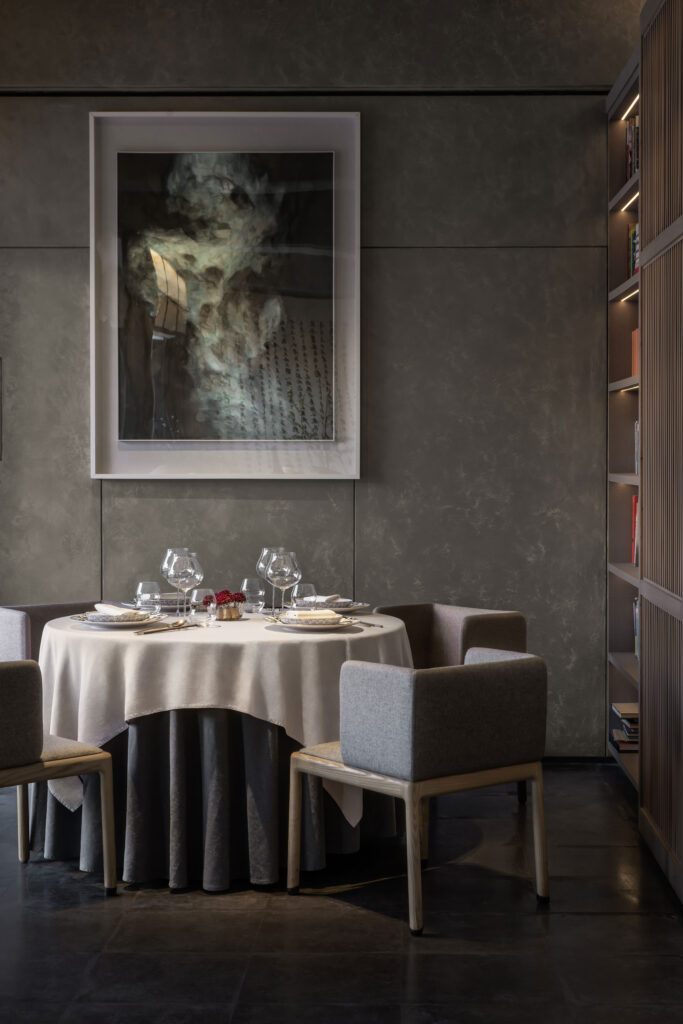 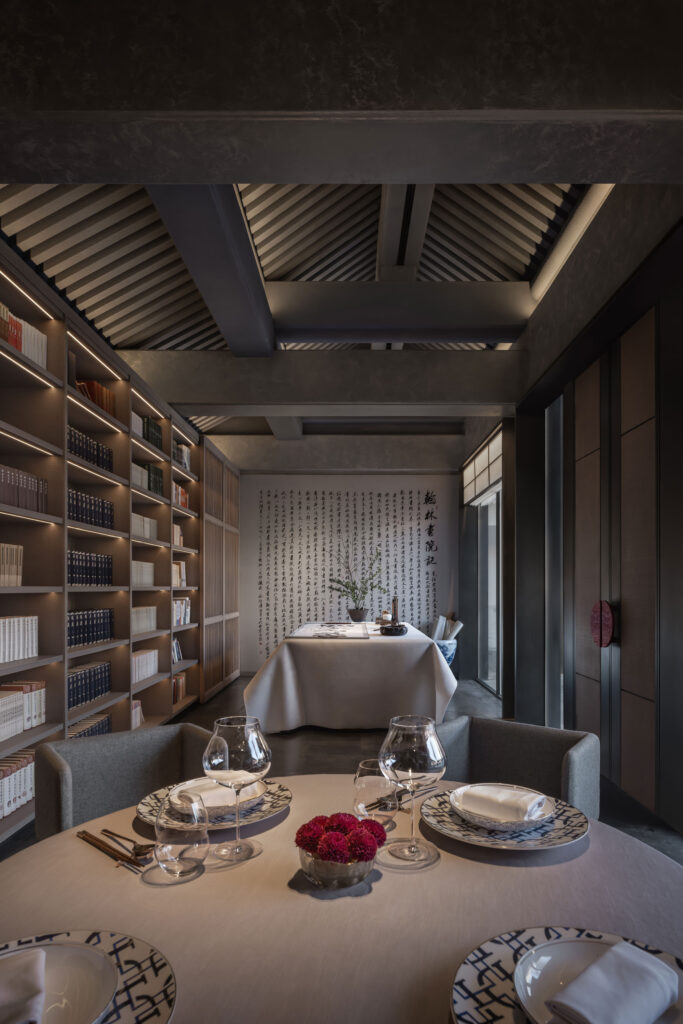 “The courtyards present a wonderful way to frame skyline views and draw sunshine and fresh air into the interior spaces.

“The sunlight shining on the trees in these outdoor areas create interesting shadow play which adds to the poetic atmosphere of the restaurant,” Liu says.

This project exemplifies LDH Design’s philosophy of being respectful of the relationship between design and nature, architecture and history, and context and culture.

“Mansion Feasts is an open platform, which provides a space for everyone.

“What we’ve designed is a modern restaurant and event venue that celebrates the ancient imperial history of Beijing in an unforgettable way,” says Liu. 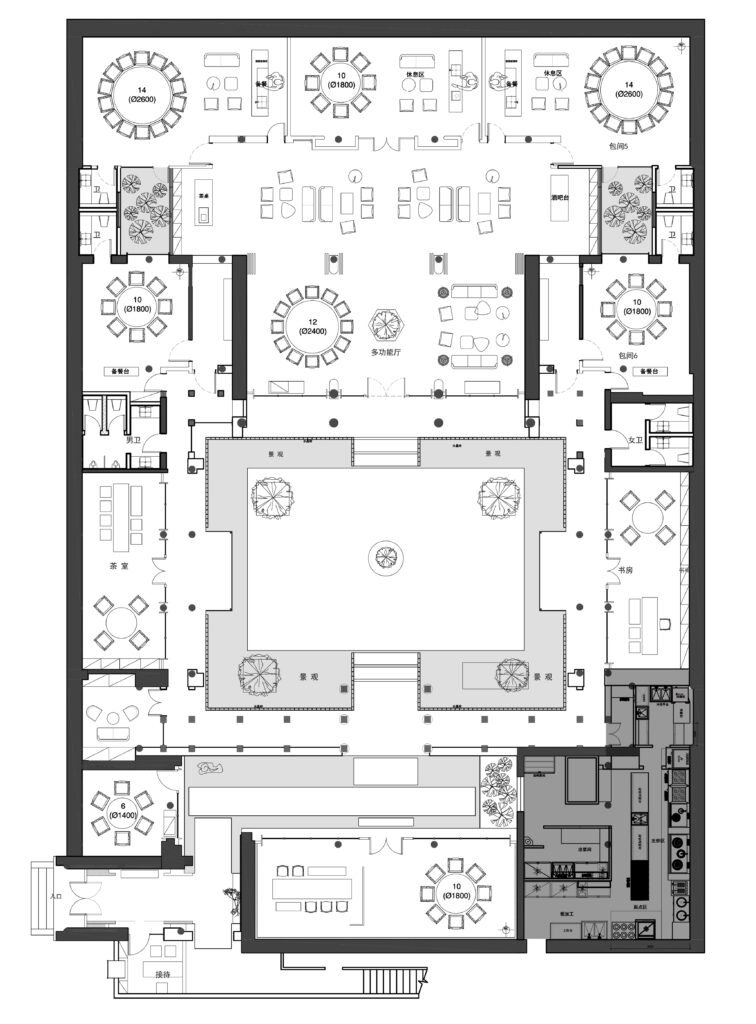 Photography: As you see – Wang Ting