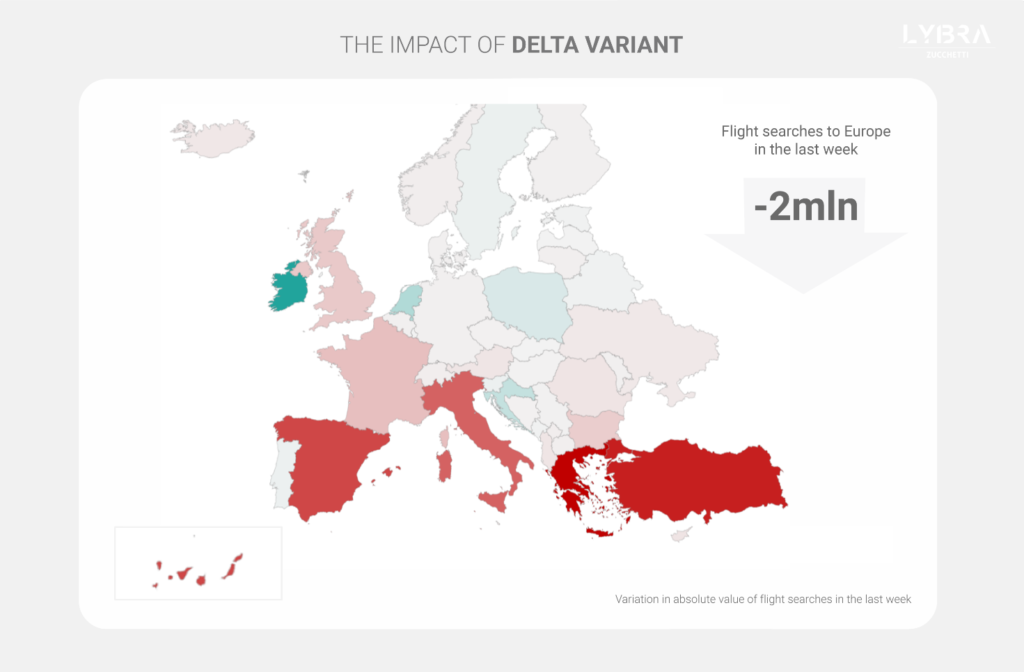 Once again, Europe is locked in new restrictions because of the spread of the Delta Variant and, as a result, tourist demand is slowing down: after months of cautious reopening and optimistic signs of recovery, tourism in Europe is suffering another forced stop, right in the middle of what was already a very lean summer season.

With the introduction of vaccines and the gradual reopening of countries, hopes for a recovery in European tourism were high, and it was hoped that hotels would be able to take advantage of the “warm weather effect” as much as possible to recoup, at least in part, for what had been lost in 2020.

But with the spread of the new variant, European countries have had to take action to avoid falling back into the nightmare of a complete lockdown.

In recent weeks, we have witnessed an increasing return of restrictions: quarantines, traffic light systems, entry requirements and many other solutions designed to ensure safe travel but which, in the end, have the effect of discouraging travellers.

So, tourist demand for Europe, which had already started to slow down after an excellent performance at the beginning of the summer, began to diminish again; this was particularly obvious in the last week (July 18-24), as travel intentions fell by 10% compared to the previous week, with an average daily rate of -1.5%.

This may not seem like much of a change, but if we look at the situations in individual countries, we are able to clearly see the huge impact that the Delta Variant has had.

Greece is a good example, since it was the main Mediterranean tourist destinations, which, until now, had been driving the recovery; unfortunately, now Greek hoteliers are suffering the most.

Greece, more than any other, has lost the confidence of travellers and, in the last week, there has been a decrease in flight searches to Greece of 16.5% (about 497,500 flights).

Only in a few cases was the demand for travel neutral or positive, but these values are not very noteworthy because they are still very low. 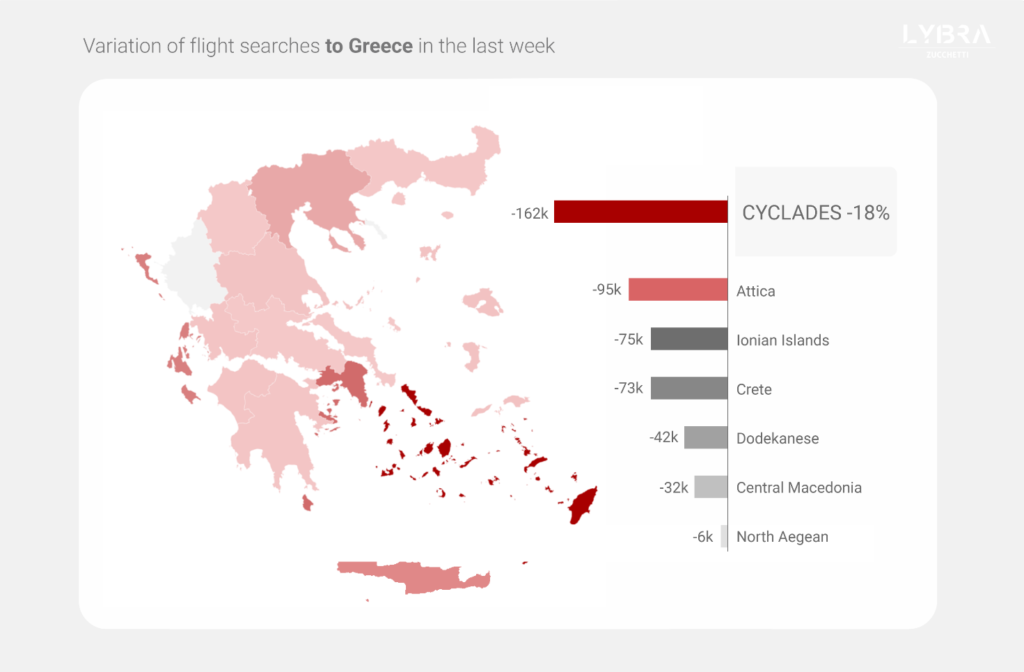 Expectations for the recovery of, at least, part of the Greek tourism industry were very high and the government has invested heavily in the travel sector.

Initially the government’s plans were to restart the tourist season with as few restrictions as possible – a desire declared, in advance, to gain an advantage over their competitors.

But the increase in contagions and the spread of the Delta Variant forced the government to reintroduce restrictive measures, and some countries, such as Germany (one of the main feeder markets for Greek travel), have increased security measures for travel.

Today, the demand for travel to Greece is decreasing and, during the last week (July 18-24), recorded an average daily rate of -1.5%.

The area most affected is the one with the highest concentration of tourists, the Cyclades archipelago, which is down by 162,200 searches (-18%). Searches for Mykonos airport decreased by 29.3% in just seven days, while searches for Santorini fell by 20.2%.

The contraction in demand is also affecting flows to the capital, with searches for Athens airport dropping by 14.3%. 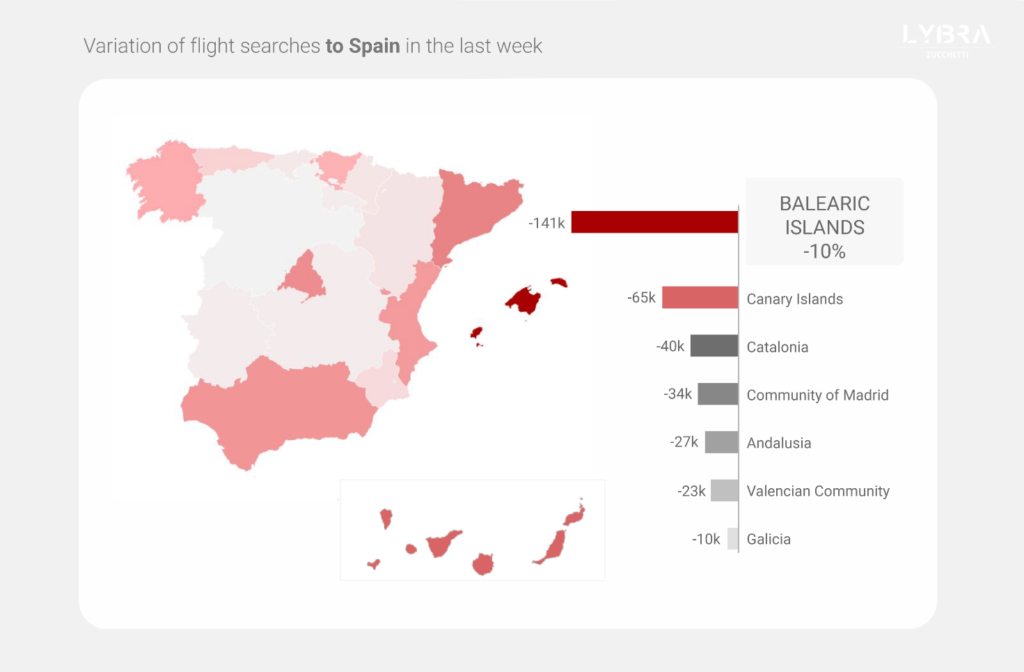 If at the beginning of July, the Spanish government hoped to recover at least half of the tourists they had in 2019; however, it may now have changed its goal.

In recent months, the peninsula’s tourism sector has been on a rollercoaster ride, adapting to numerous changes in travel restrictions by foreign countries and internal restrictions, and is now facing a new health deterioration.

There is already discussion of a fourth wave, given the wide spread of the new variant, and demand is already feeling the effects: during the last thirty days (June 25– July 24), travel intentions to the Iberian Peninsula have been negative, with an average daily rate of -1.2%, which has worsened during the last week to -3.2%.

This change of course is due to several factors, but the ones that have contributed the most in recent days are the events related to the situation in the Balearic Islands.

The archipelago is the most desired Spanish destination for tourists (it makes up 58.2% of total flight searches to Spain) and, during the last few days, has had a serious increase in cases, which has discouraged tourists to travel.

In addition, the explosion of new outbreaks has led the UK to downgrade the Balearic Islands from the green list to the amber list in its traffic light system.

Destination is a market intelligence project created by Lybra – developers of the most complete, machine learning, data-centric Revenue Management System (RMS) available on the market – to share real-time, region-specific statistics, information and trends in the world of tourism.

Every day, Lybra analyzes millions of datasets – data collected from thousands of hotels’ PMS and flight search data from a leading metasearch booking engine – to help hoteliers “look ahead to better understand the present;” in other words, Lybra helps hoteliers understand the upcoming demand for their destination and gives them the revenue management tools and actionable insights necessary, to maximize bookings and revenue.

To find out more about the upcoming travel demand in your city, you can book a free demo to learn more about Lybra Assistant RMS’ Flight Module, which provides access to real-time data for your specific destination.