The British Institute of Interior Design (BIID) is delighted to announce University of Lincoln Interior Architecture and Design (BA) as the winners of the Student Design Challenge 2019, which returned for its fifth successful year at the impressive showroom of furniture manufacturer Herman Miller, London.

The competition, which took place on Saturday 23rd November 2019, offered final year Interior Design and Interior Architecture degree students from across the UK an invaluable experience to progress further in a design career. 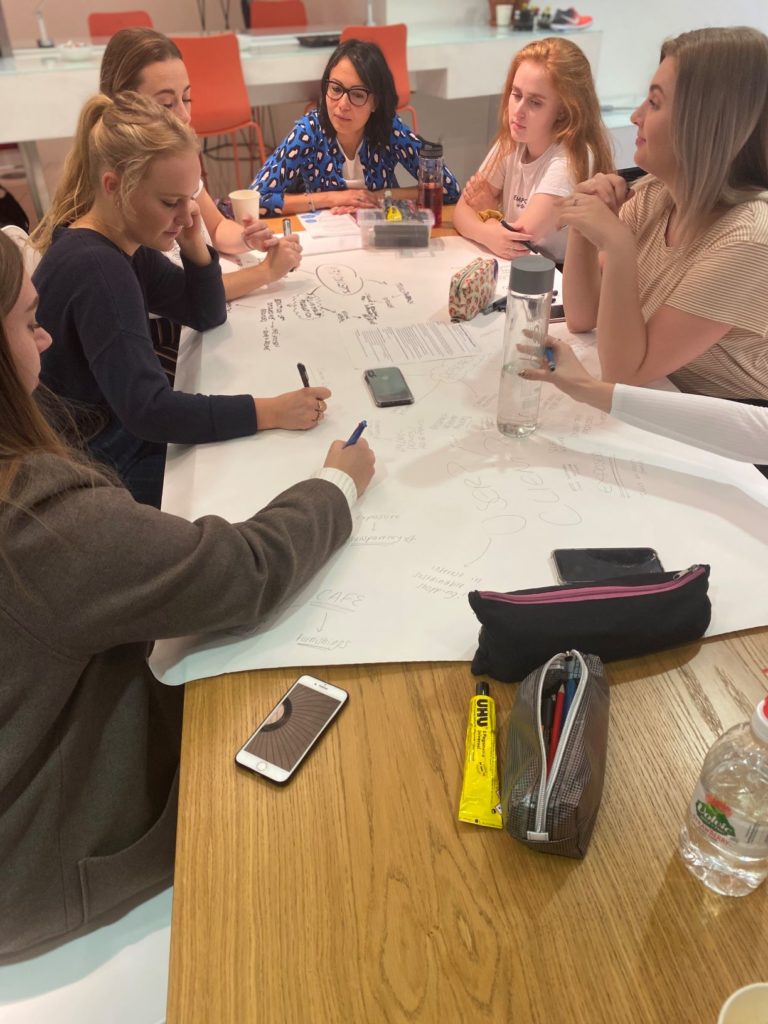 Each team included six students, nominated by their course directors.

The design brief was only revealed to the teams on the morning of the competition, where students were required to design a zero-waste supermarket and café.

They were asked to focus on the principle of the circular economy; aimed at eliminating waste and the continual use of resources, so their designs must be sustainable and environmentally aware. 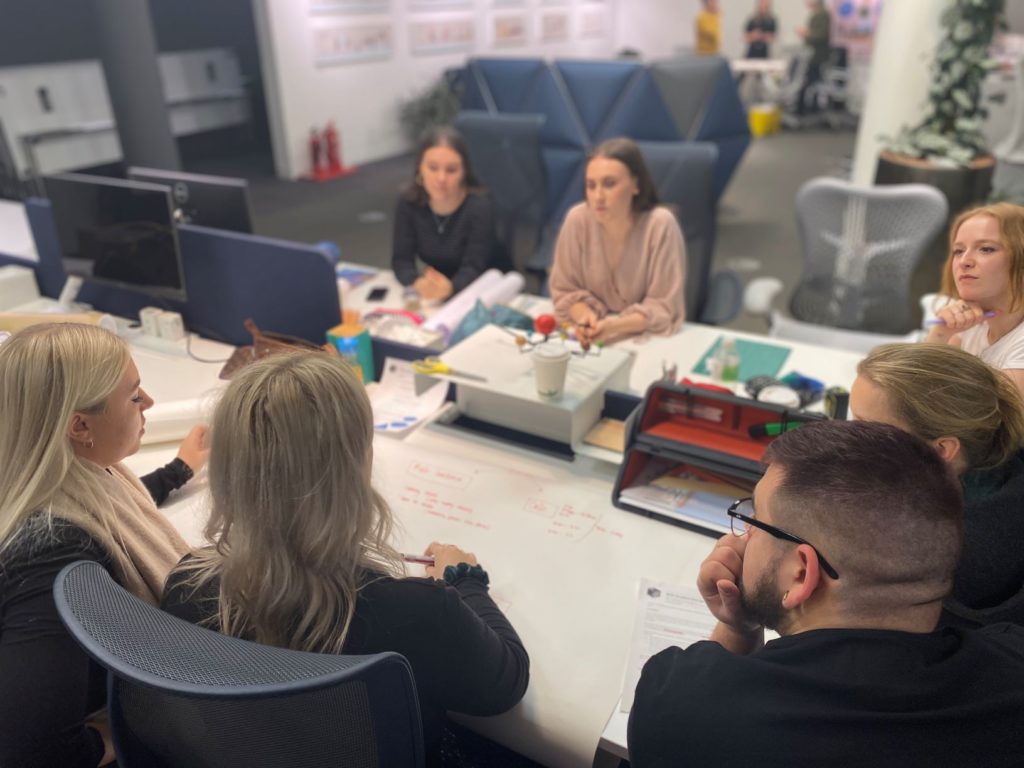 Each team was also asked to consider access requirements for customers, additional storage space, and the materials used, as well as choosing one piece of iconic Herman Miller furniture as part of their design scheme.

One they had been given the brief, the groups were given six hours of design time and were each assigned a professional practicing interior as their mentor to offer advice and feedback on their designs.

The mentors this year included:

The CAD-free competition meant that students could only present hand-drawn sketches, drawings and models as part of their proposals.

Each team were then given five minutes to present their final designs to a panel of judges. 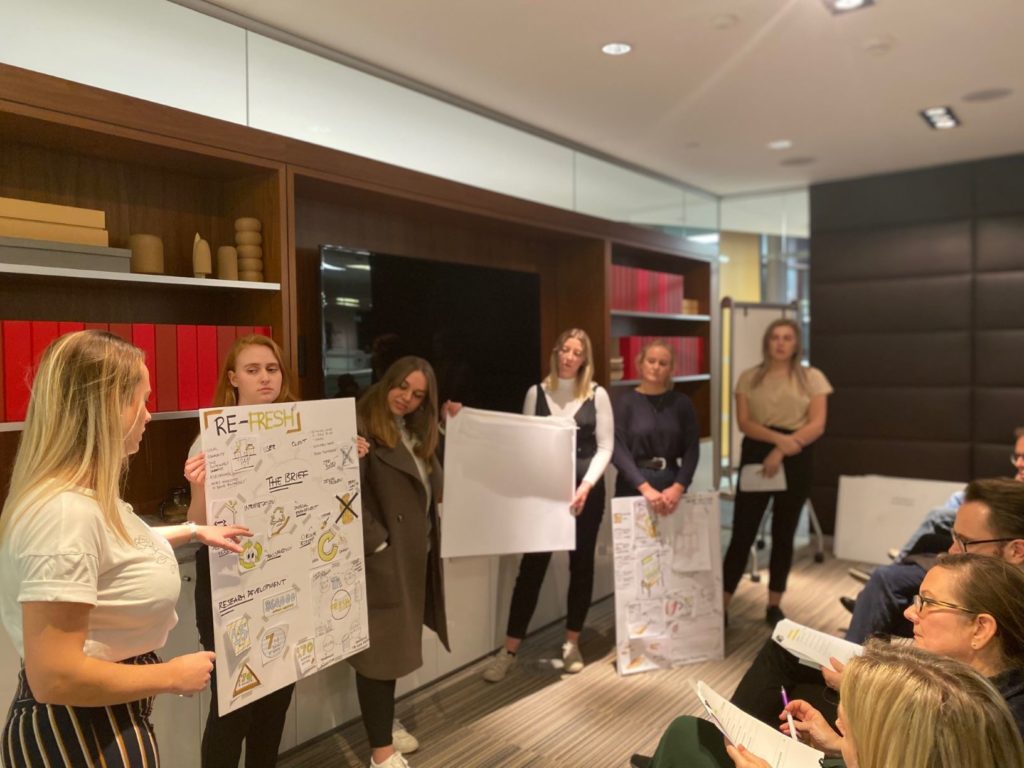 The judges then had a further three minutes to ask questions and provide comments to all groups.

The judges were looking for a standout design that met the brief in the most innovative way, considering the needs of the clients and working within the existing space.

After reviewing each proposal, the judges cast their winning votes, awarding University of Lincoln first place.

The runners up were Plymouth College of Art and taking third place was De Montfort University.

The judges thought that the planning that was involved in the University of Lincoln Interior Architecture and Design’s concept was excellent and the presentation itself was clear, cohesive and interesting.

The team really bought into the concept and as Harriet Forde, BIID President said, ‘it had guts’.

They loved the use of the layered tracing paper to guide the client through the planning stages and concept.

Harriet particularly liked this as she said that a client can really feel a part of the process when the planning is structured this way.

They also loved that the team broke out of the four boards given to them.

Bertie Van Wyk, Workplace Specialist, Herman Miller, loved that the team pushed the boundaries and said “Rules are there to be broken and that is what we loved.

“So much time in design we get stuck in our ways and we need to think a little differently.

“So, the crazier your ideas, the more innovative it can be, run with it. I absolutely loved the fact that you broke the rules.”

The BIID’s growing membership represents both the commercial and residential sectors, from heritage to cutting edge.

In addition to rigorous entry requirements which assess training, experience and professionalism, the Institute requires members to continue their professional development throughout their career, ensuring their continued expertise in design process, practice and regulatory matters.

It is the only professional organisation for interior designers to have been granted the prestigious accolade of Institute status by the Secretary of State.

In the UK, the BIID is a full member of the Construction Industry Council and, as such, is part of Government consultations to advise on new policy and legislation.

Internationally, the BIID is represented on the board of the International Federation of Interior Architects and Designers.