This organisation helps to raise awareness of the world’s needs, large or small, by setting young architects the challenge of creating sustainable build solutions in areas where architectural intervention is required.

One of their most recent competitions focused on the rebirth of storm struck Arte Sella in Italy.

To highlight the standard of entries into the competition we have selected TER restaurant expansion, a visionary concept by Coral Mesika.

Not the eventual winner but deserving of merit for its detailing and consideration of its environment.

In a world where sacred spaces daily erode, mountains are still pure places.

They are spaces that are difficult to reach.

Without any doubt, one of those experiences is Arte Sella.

Arte Sella is situated in between two stone peaks.

For more than 30 years, it has been attracting to the mountains of the homonymous valley the most astonishing contemporary artists and architects.

Here, creative geniuses have left their mark generating one of the most important art-nature routes in the world.

During the night of the 29th October 2018 an unprecedented storm hit Arte Sella.

It damaged hectares of secular woods and left a trail of devastation of mud, uprooted stumps and felled trees.

Now more than ever, it needs creativity and planning. For this reason, YAC launched Calamity Atelier.

The competition aimed to help regenerate the largest art park of the contemporary scenario by creating a system of ateliers and architectural works in order to make artists and visitors go back to those mountains.

What dwellings to build for the greatest artists of the world? How to encourage people to go back to places that have been severely hit by a natural disaster through architecture?

This was the challenge to young architects.

The competition gave them the opportunity to design a system of works to be placed on the mountains that have been damaged by the storm.

These systems should assist in recreating and reintroducing the fascination and beauty of one the most outstanding artistic experimentation scenarios of the world.

Like modern sanctuaries, the interventions that the competition aimed to generate was to transform this place into a pilgrimage destination for visitors and artists.

Season after season, they will have the chance to witness and contribute to the rebirth of the park. 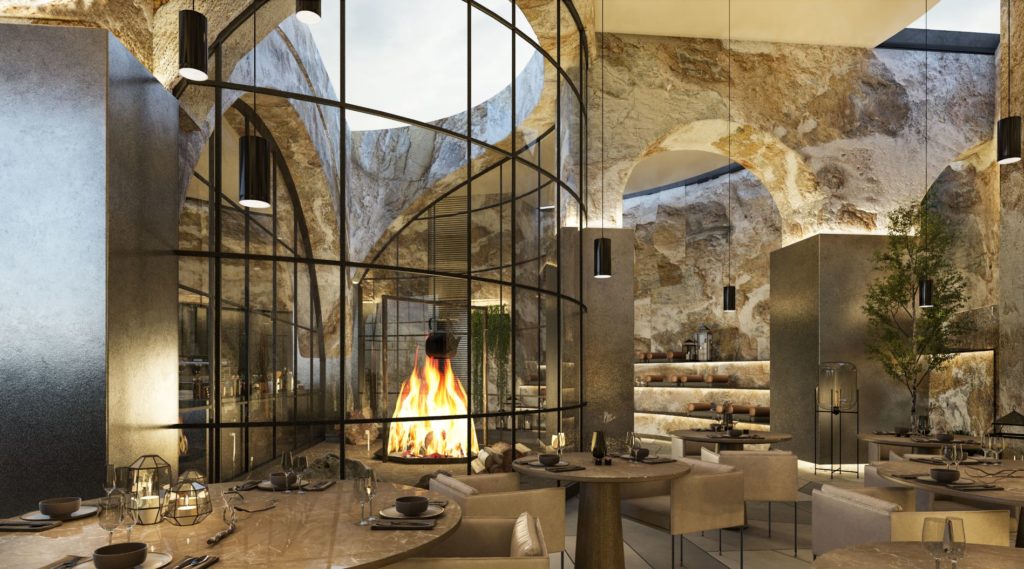 “Stability is a universal value one seeks to reach in their lifetime” states Coral Mesika.

Given the recent events that shook the core of Art Sella, the basis of its recovery should be in the form of a stable foundation.

1. What does a “stable” space feel like? Psychologically and physically.
2. The connection between the forest land and the food that is served at the restaurant.
3. How to integrate this space harmoniously into the forest in a way in which it will live cohesively with the neighbouring artwork, nature and people. 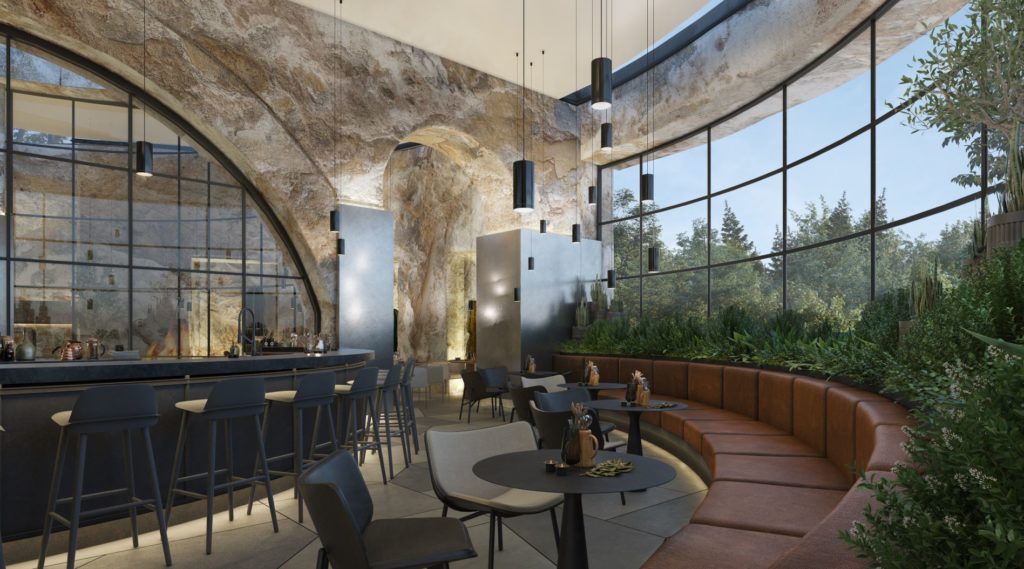 The idea of stability is translated through mass, shape and materials.

Different from most of the forest’s artwork, TER looks like a massive boulder rearing in the forest.

The stone exterior makes up the majority of the interior as well, acting as its base material. 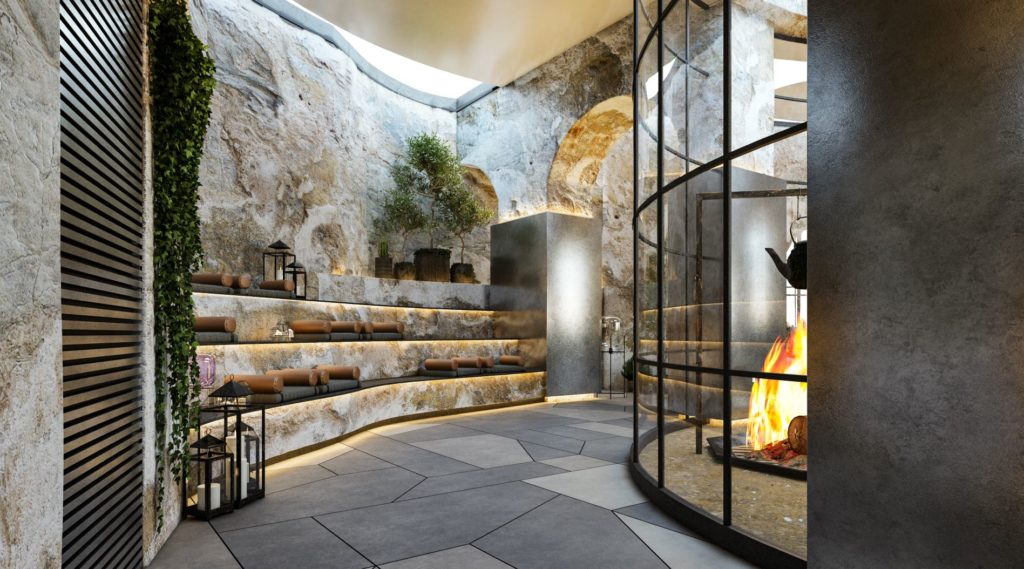 With the materials there is a clear balance of old and new.

The old acts as the foundation and pays homage to the area’s roots whereas the new alludes to a burgeoning future.

Together, they play a game of layering, and develop throughout the space.

The connection between the land and the food comes through the method of cooking in the restaurant- which is campfire cooking.

In the centre of the plan there is an open outdoor space which is used to cook foods on an open fire.

The plan is designed in a circular motion around the open space in order to fully commit to this concept. 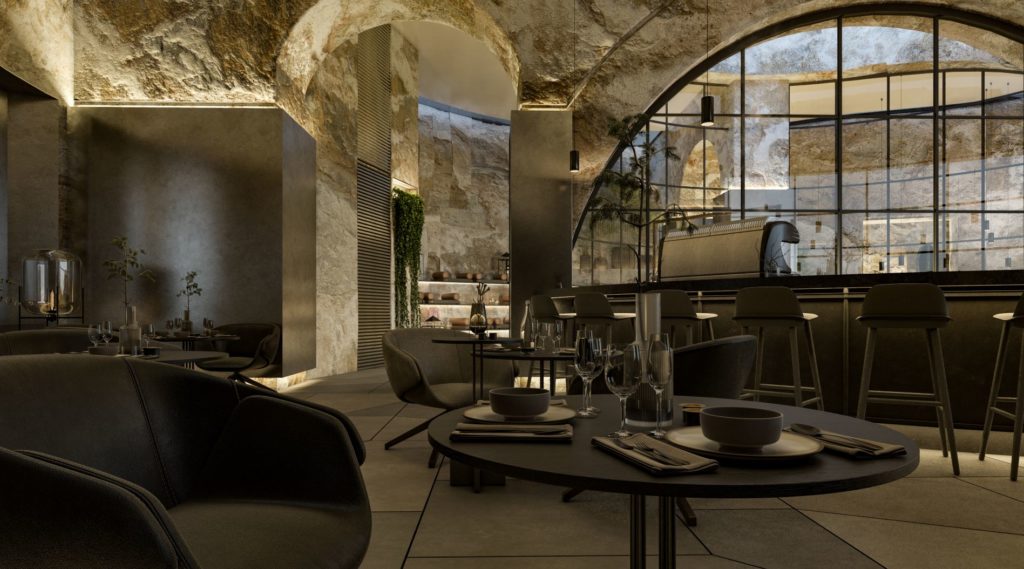 Everyone in the four areas of the restaurant can view and enjoy the chefs at work, creating a seemingly interactive dining experience.

The restaurant blends into its surroundings by acting as another rock in the landscape.

It is differentiated by the smoke arising from its centre, which creates a sense of allure and intrigue. 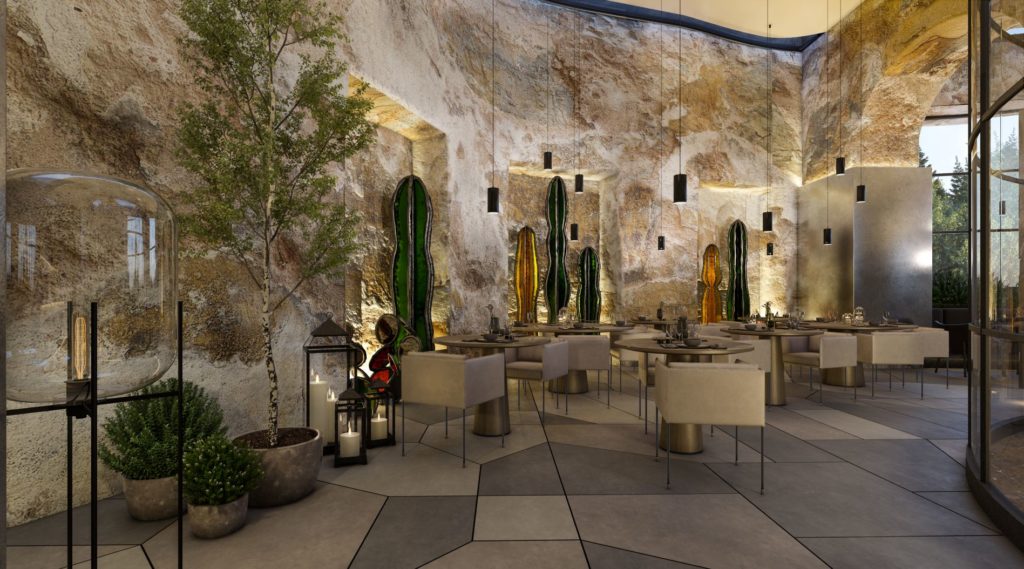 It’s a sight that draws people in toward the centre – to re-establish the core essence of Art Sella.

Coral Mesika graduated from the Avni Institute in Tel Aviv with a BA in design. In the following years Coral worked in leading design studios with projects located worldwide, specializing in: commercial, hospitality, co-working offices and highly progressive medical spaces. Her company, COCO Atelier, is an interior design studio that specializes in commercial and public spaces.