It has its own unique and original identity.

Designed in partnership with renowned architect Kengo Kuma–the architect of the Olympic Stadium in Tokyo–the hotel allows you to experience the essence and spirit of Tokyo without ever having to leave the premises. 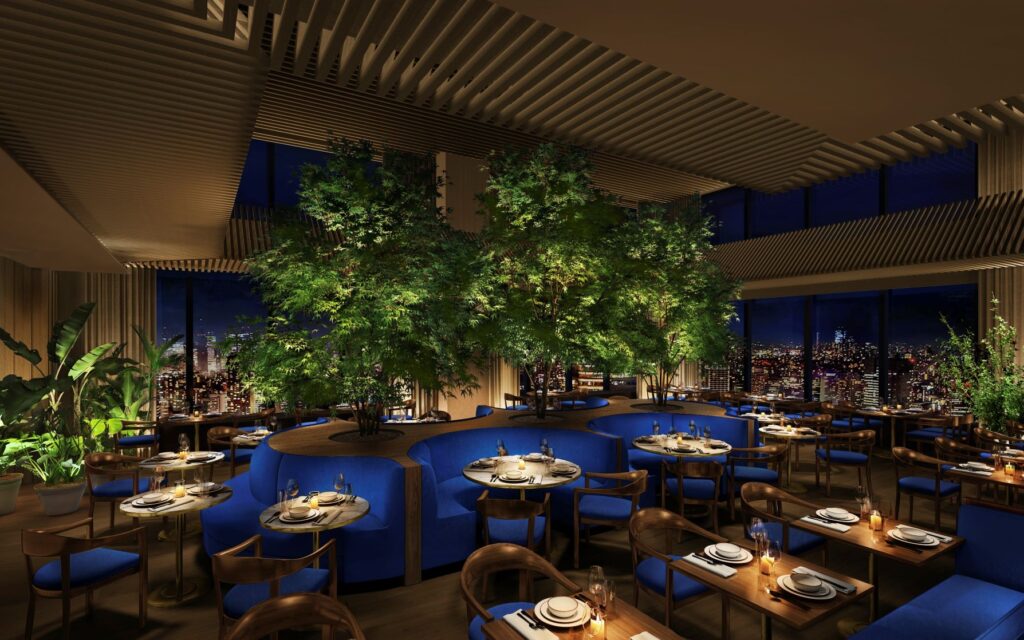 The hotel brings together a dream-team collaboration between Marriott International, Ian Schrager and Mori Trust, led by its visionary president and CEO, Miwako Date.

The opening is especially poignant for Sorenson, who was born in Tokyo and feels a special connection to the city, and Schrager, who has been profoundly influenced by, and long revered the purity, simplicity, elegance and refinement of, Japanese culture and aesthetics.

Schrager became devoted to the Japanese way of life, architecture, design, visual arts and culture early on in his career in a very deep and profound way.

He has had the privilege and opportunity to work with some of the most creative Japanese minds and talents of a generation.

It was a provocative, seminal event that featured all black models and was the first show of its kind.

In 1985, he persuaded the Japanese architect Arata Isozaki to design the Palladium nightclub in New York City, Isozaki’s his first project in America.

Drawn to his revolutionary use of materials and individualistic, iconoclastic, original approach to creating unique and exciting spaces and experiences, Schrager convinced Isozaki that a nightclub was the perfect canvas for a world-class architect, such as himself, as there is “no discernible product other than the design itself and the experience created.”

Therefore, it is more about architecture and design than anything else he could possibly do. 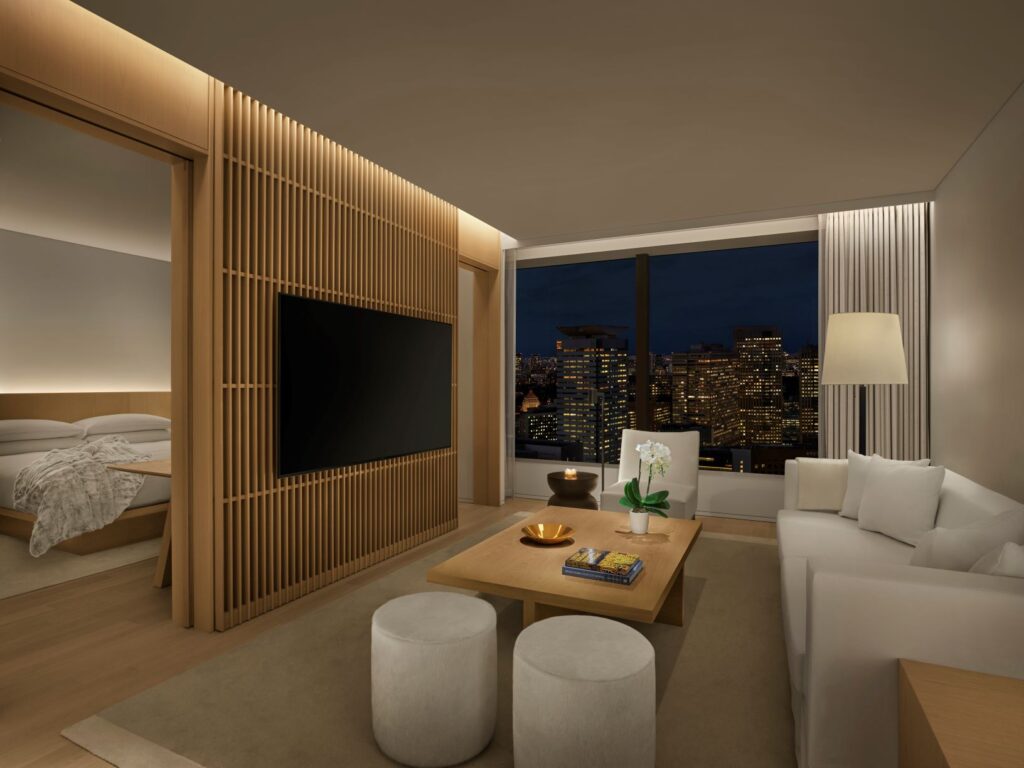 The hotel’s soaring public space was inspired by Buddhist temples and their structure, purpose and organization.

They consisted of a central courtyard surrounded by various other structures, each with its own specific purpose.

This central courtyard was used for ceremonies, gatherings, communal prayer and, in general, for people to come together and interact, congregate and create a community.

It was a true communal space and experience.

In much the same way and to achieve the same goal, The Tokyo EDITION, Toranomon’s two-story lobby, is a centralized space that operates and functions not only as a new and modern gathering place, but is also meant to facilitate and encourage communal and social interaction in all of its forms.

It is where the hotel comes to life with a palpable, high energy created by bringing a diverse group of people together from all over the world.

Several eating, drinking, entertainment and other experiences, each distinctly different in both look and feel, radiate from the Lobby in the same manner as the peripheral buildings do in a Buddhist temple. 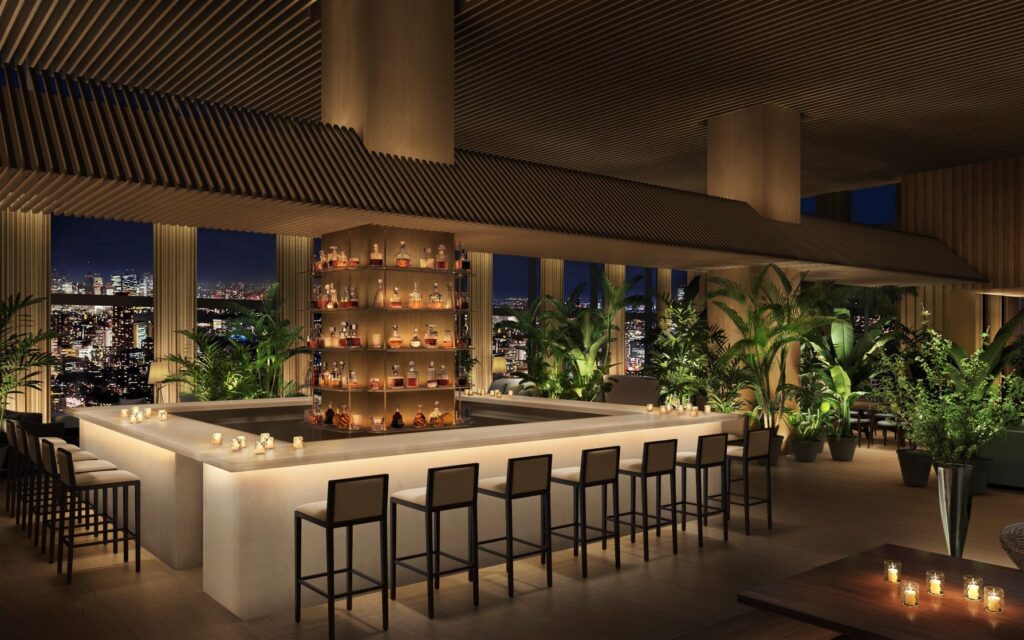 Each of these eating, drinking and entertainment areas has its own individual reality, yet still feels like part of the whole, and each can be enjoyed separately or together all in one night.

As with all EDITION hotels, lines blur between work and play, eating and drinking, talking and thinking, solitude and socializing.

The hotel is housed within Tokyo World Gate, a new 591ft (180m), 38-story mixed-use skyscraper, where it occupies floors 31-36 and commands jaw-dropping unobstructed views of the Tokyo skyline and the absolute best view of the landmark Tokyo Tower from anywhere in the city. 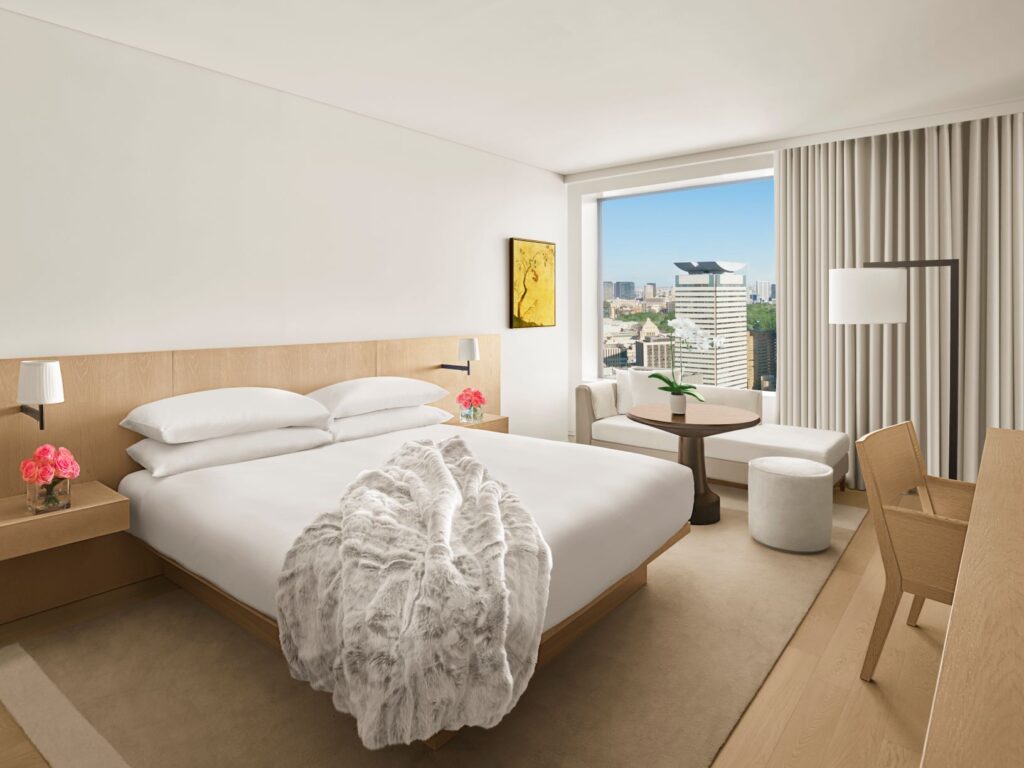 With an infinite array of possibilities, the 206-room hotel’s public space features over 10 distinctly unique entertaining and working spaces.

The restaurants, bars and entertainment areas are a cacophony of black, blue and jade and were inspired by the precious stones and extremely rare elements—sapphire, Japanese jade and gold.

Throughout the spaces, authentic, natural, honest materials such as walnut, oak, bronze, travertine, glass and silk are juxtaposed with yamato-bari, a traditional Japanese wood cladding, and exotic greenery to create an eclectic mix of elements that cannot be categorized as one type of design or look.

However, there is a clear reverence to Japanese culture. 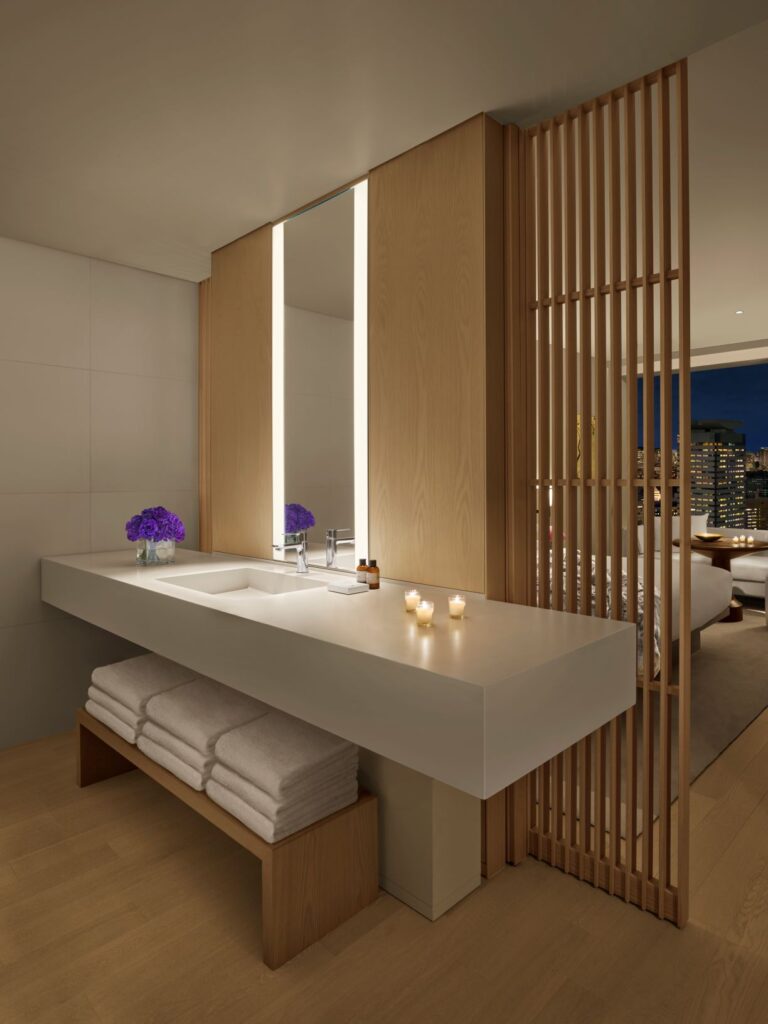 “We wanted to do something that embodies the traditions of Japan,” says Schrager, “but also looks forward with design and visuals and brings a sense of the cutting edge and avant-garde, which Tokyo always does as well. We’ve created this energized resort in the middle of Tokyo, a beehive of activity where you can get away without ever leaving.”