Set squarely in the centre of Lithuania’s capital, Hotel Pacai offers a culturally-rooted stay reflecting the virtues of this singular destination: historic, charming, and vibrant in spirit.

Regarded as the most magnificent mansion of the Grand Duchy of Lithuania in the 17th century, today’s incarnation as a private hotel, a Design Hotels™ member property, offers 104 spacious guest rooms, two conference spaces, a lounge bar, and two distinctly Baltic dining outlets. 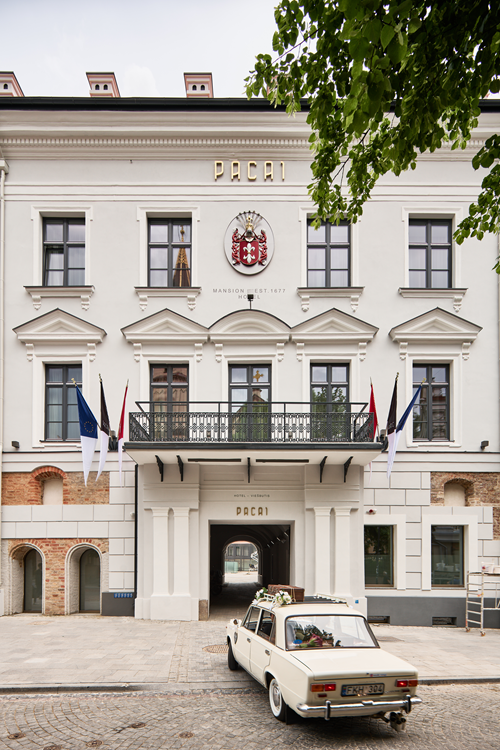 Occupying the Palace of Pacai, a former private mansion where some of the most influential Lithuanian families used to reside, and guests over the years have included Russian Tsar Peter I, Russian Emperor Alexander I and French Emperor Napoleon, Hotel Pacai arises as a sophisticated urban retreat, blending authentic 17th-century Baroque grandeur with contemporary design.

Consisting of four interconnected historical buildings which form an inner courtyard, the structure was converted by Lithuanian architect Saulius Mikštas who preserved historical details like original frescoes and statues from the 16th century and brought in sleek modernity in the form of abundant marble and a fresh colour palette. 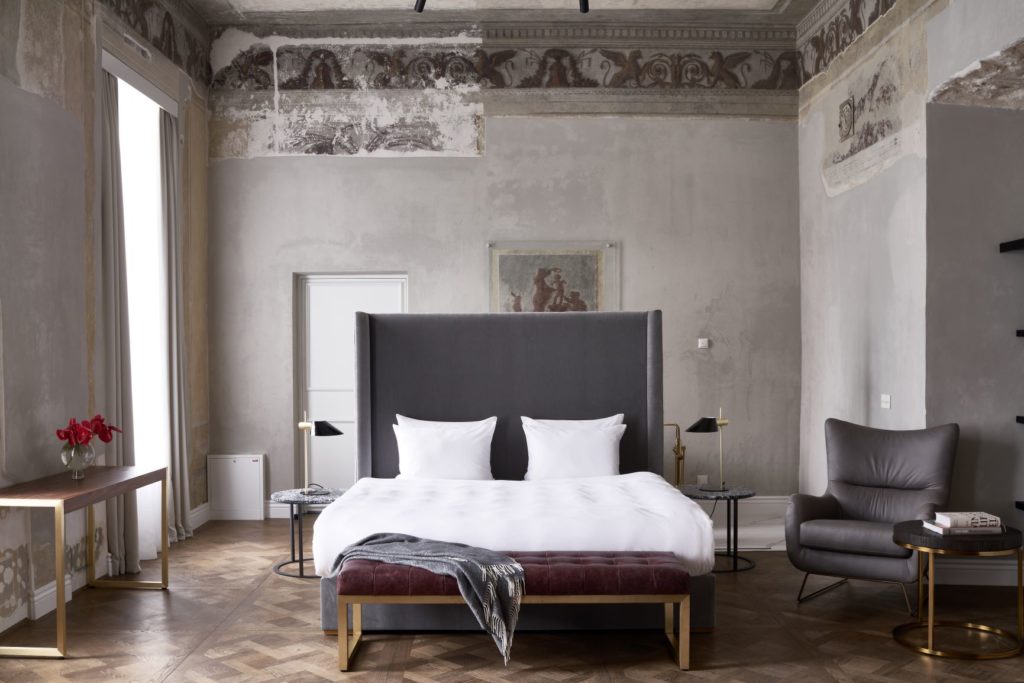 Hotel Pacai showcases deep ties to this fascinating destination, an area less-travelled by us Brits.

The Palace was originally designed and decorated by the same Italian architects, painters and sculptors who worked on the Church of St. Peter and St. Paul in Antakalnis, Vilnius, and Pažaislis Monastery in Kaunas—considered to be masterpieces of Lithuanian Baroque.

For years, the building was used for various administrative purposes, and was even used by the police until 2012, before ultimately being purchased by the new owners. 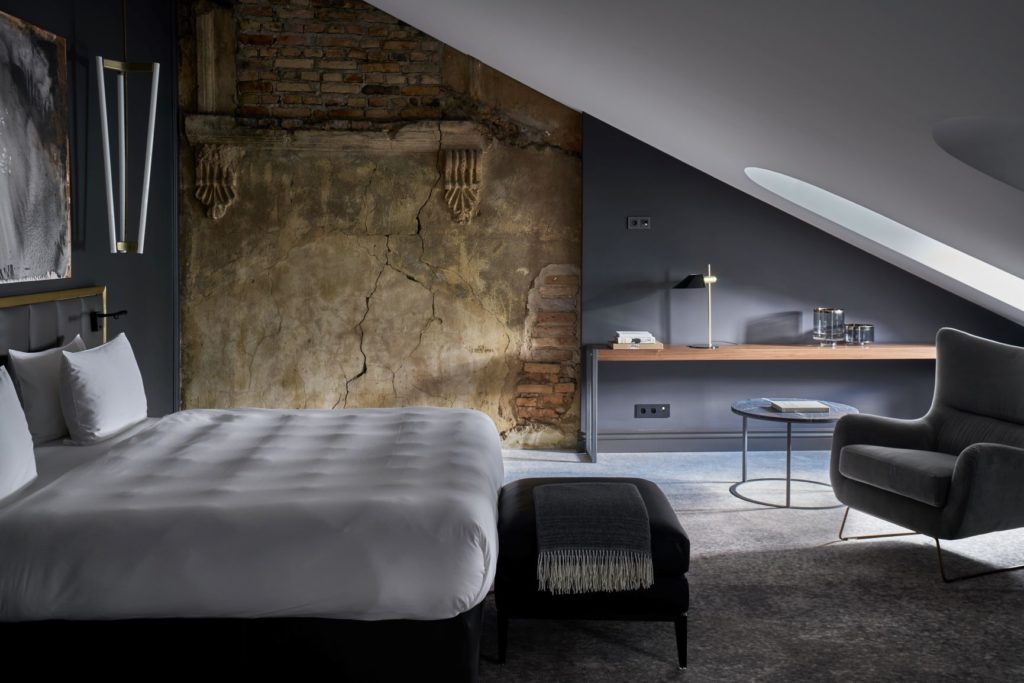 “It was a time capsule of our country,” says Architect Saulius Mikštas, “and we felt the life lived during the epoch of the Grand Duchy of Lithuania.

“We saw the same paintings and art pieces that Napoleon, Tzar Alexander I, Polish king John Sobieski and other historical influencers saw.”

Creating a hospitality experience attuned to cultural authenticity and rooted in the fascinating destination meant the approach to the re-invention was equal parts transformation and preservation. 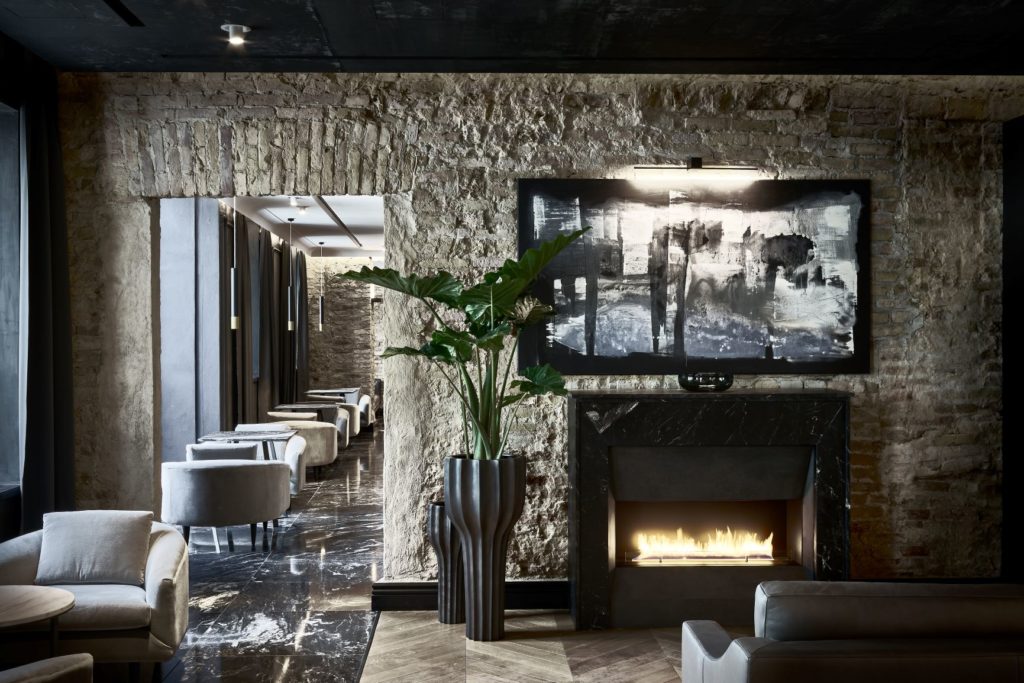 Architect Saulius Mikštas strived to preserve as many authentic architectural details as possible, including the courtyard and arches, as well as original frescoes found throughout the inside of the building.

Unearthed wall paintings were restored, and many layers of wall paint were removed to reveal the most interesting and well-preserved layers, mostly from the Baroque period when the palace belonged to the Pacai family. 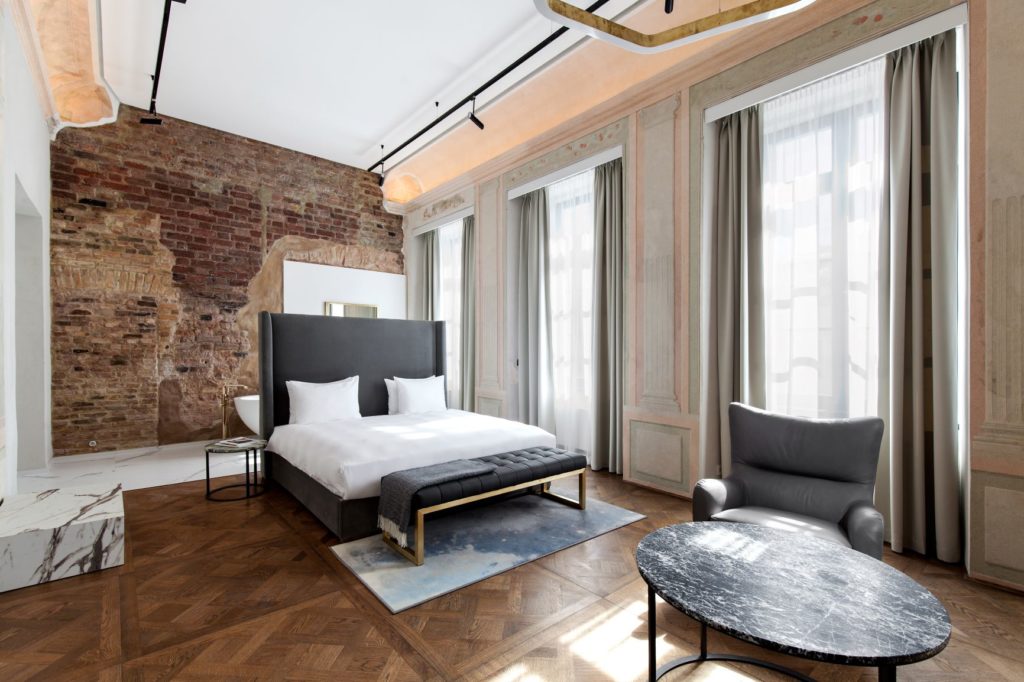 In the process of restoration, many doors that were closed and cemented after the palace was taken over from the family were opened again.

Details like the enigmatic staircase, authentic statues, and an abundance of historical artifacts have been lovingly incorporated into the new incarnation and two more floors were added, resulting in a five-story hotel with a reconstructed Baroque rooftop. 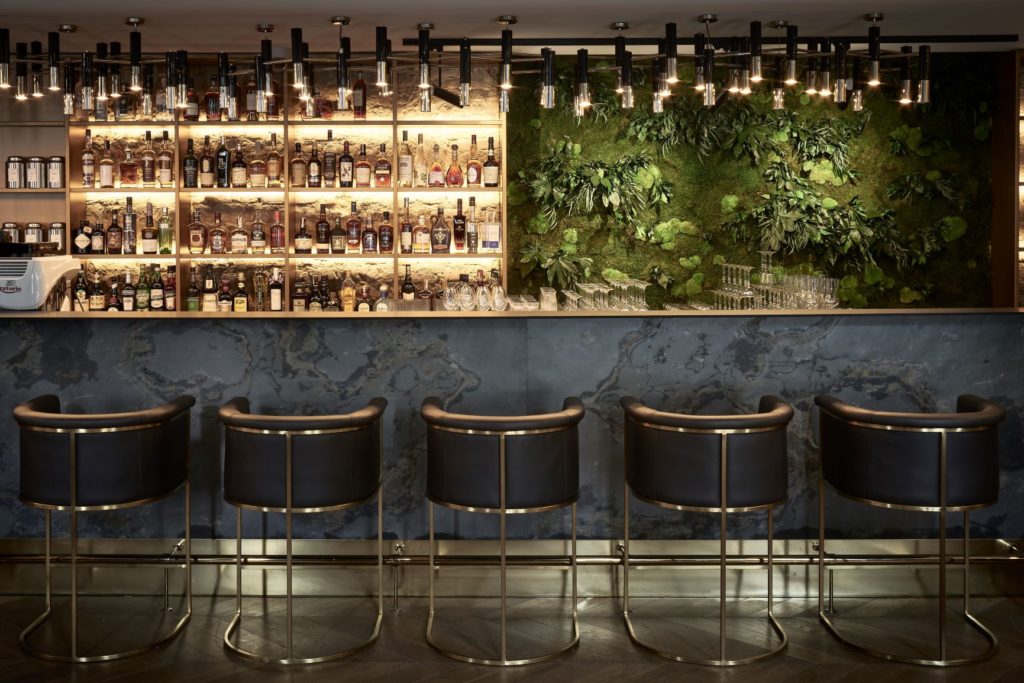 To keep the focus on the building itself, soft, deep tones dominate the public areas, and a creative use of lighting design highlights critical elements like frescoes, statues, and art pieces in the rooms.

The 94 rooms and 10 suites are each a study in spaces crafted uniquely around its own distinct set of features. 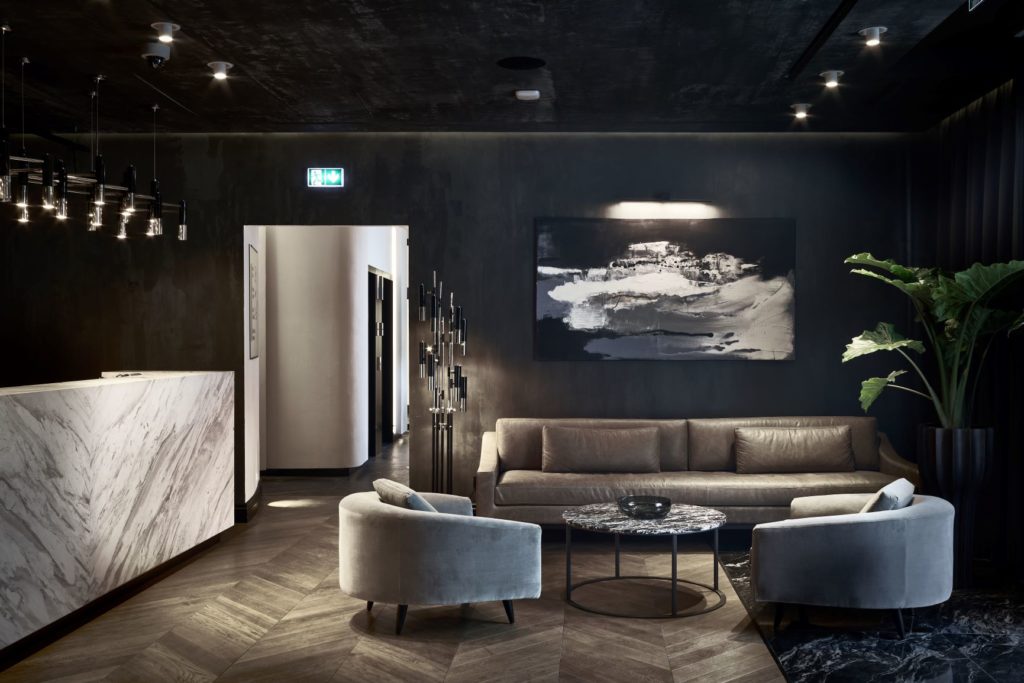 From intricate wall details like painted faux columns and rugged exposed brick, to original wooden beam ceilings and frescoes, all have all been lovingly revealed and highlighted.

Colours range from eggshell and light grey, to taupe and deeper browns, with ample mind paid to ensure the room’s natural characteristics dictate the design.

Seven room categories range from 22 to 123 square meters, offering views of the classically Baroque courtyard, or a myriad of alluring angles of the Old Town.

Hardwood herringbone floors unite the design landscape throughout the property and the main brands selected for the project include RH (Restoration Hardware), Delightful Lightening, Hastens, Grohe, Cane-line, and Ege carpets.

Uniquely, the Pacai Suite and the Heritage Suite can be connected to form a 210-square-meter space.

Sheer glass showers feature in all rooms and suites, and most rooms feature bathtubs, some freestanding within the bedrooms. 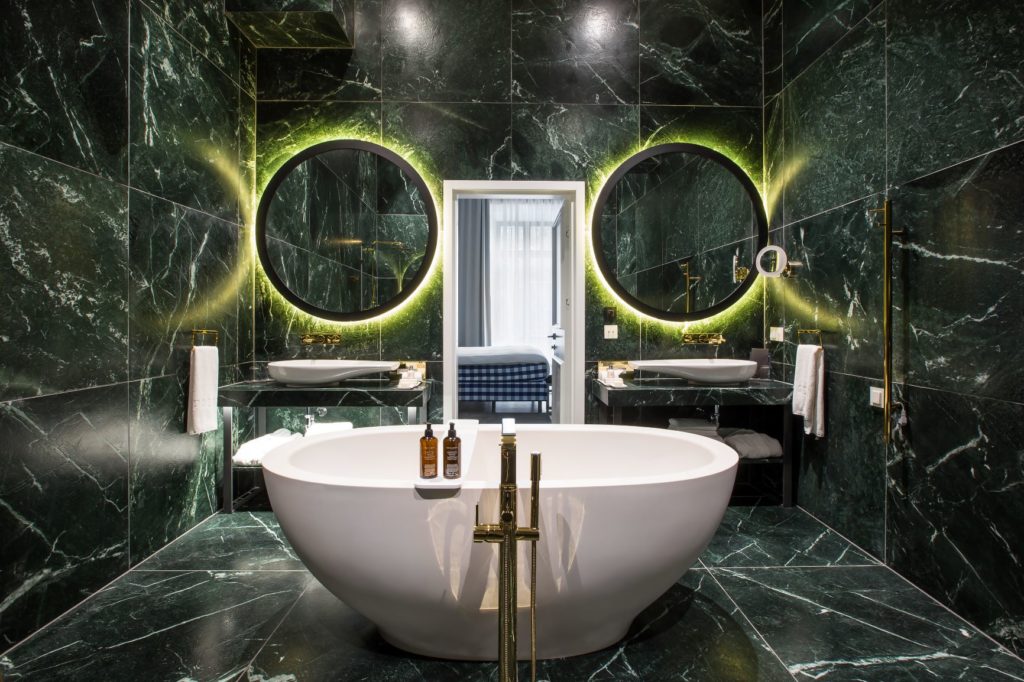 When merging so many historical elements and easing them into today, YES Design used the Baltic region as the guiding philosophical approach, using only pure and natural materials and a colour palette inspired by the surrounding nature.

This is most aptly reflected in the art on display, where colourful abstract strokes emulate the seasonal hues of the region.

hotelpacai.com/en
a member of Design Hotels™