One we missed when it re-opened after a major refurbishment in 2019 is the Holmes Hotel London.

GS Magazine first reviewed the property when it opened in the early noughties as the Sherlock Holmes Hotel.

It was at that time the first design-led boutique hotel in the area and as such it received a lot of attention.

Baker Street was getting trendy and this hotel was leading the way. Features of note included a dominant sweeping staircase near the front entrance, a vibrant bar with a long and beautiful pewter bar top and, in the guts of the building, a restaurant with a large and open viewing hatch into the kitchen.

These features appeared to be straight from the Terence Conran school of interior design.

Conran was a massive design influencer during that time, his restaurants were trend-setting, theatrical spaces and they helped to change the face of London dining.

Thankfully, many of those original features within the hotel have been retained although the ground floor layout has been reconfigured. 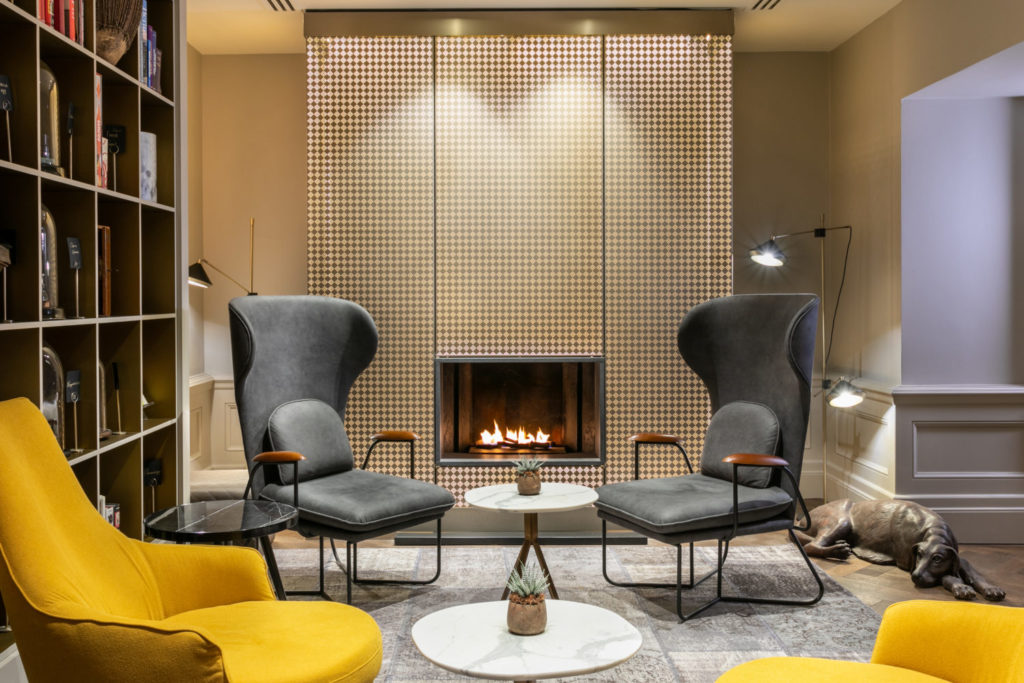 The main entrance has been moved from Baker Street to what was the back of the hotel on Chiltern Street.

Chiltern Street is less busy so it’s easier for cars and taxis to pull in to pick up or drop off customers and guests.

It also avoids the need for guests to trundle through the front bar laden with luggage. 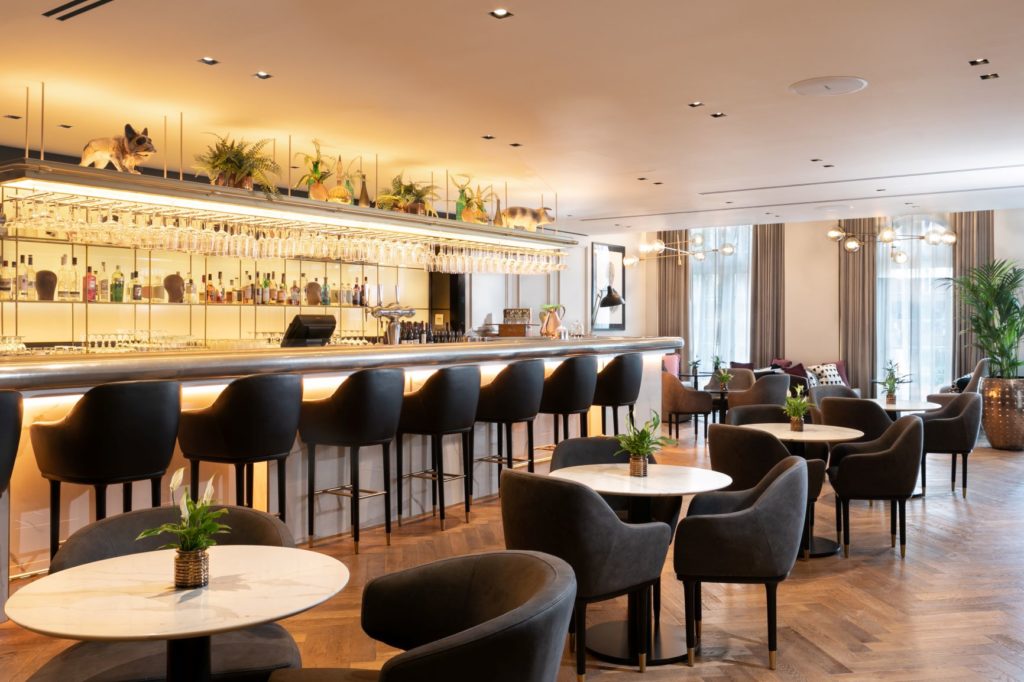 From the new reception a corridor takes you past a library room and then alongside the hotel lounge, past the lift to the upper floors and into a central holding space with the restaurant to the left and the bar to the right.

As a part of the refurbishment all of these spaces have been tinkered with in one way or another to improve guest flow.

Of course, Baker Street is best known for one fictitious resident and the Holmes Hotel has laced hints and clues into its design so that the most ardent fan of Sherlock Holmes will not be disappointed. 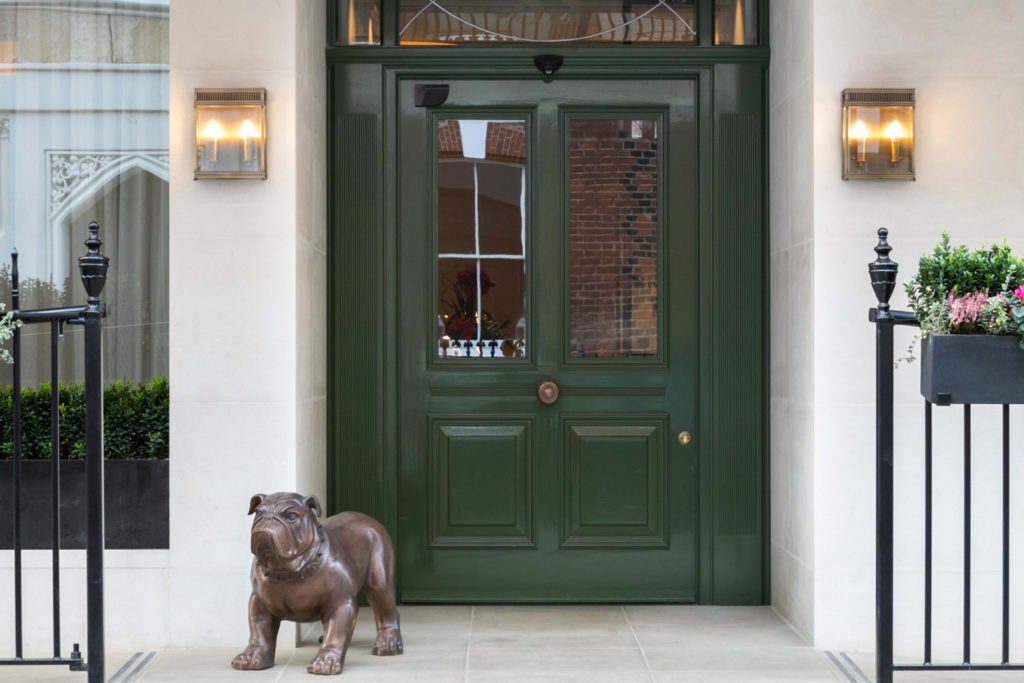 There are references to Holmes and his many adventures throughout.

Life size bronze hounds lay by the fireside in the lounge, a deerstalker hat hangs from a hat stand, calabash tobacco pipes are displayed on shelves and in the restaurant glass screens and curtain fabrics have a hand printed floral design depicting large poppies, the source of Holmes’ opium addiction.

On the upper floors, the theme continues in the bedrooms, which range in size from overly generous to compact.

Unlike new build hotels, the rooms do vary in shape and size.

This property was originally four Georgian townhouses, these were knocked through and the space reconfigured to provide a number of different shaped, and sometimes quite quirky, rooms. 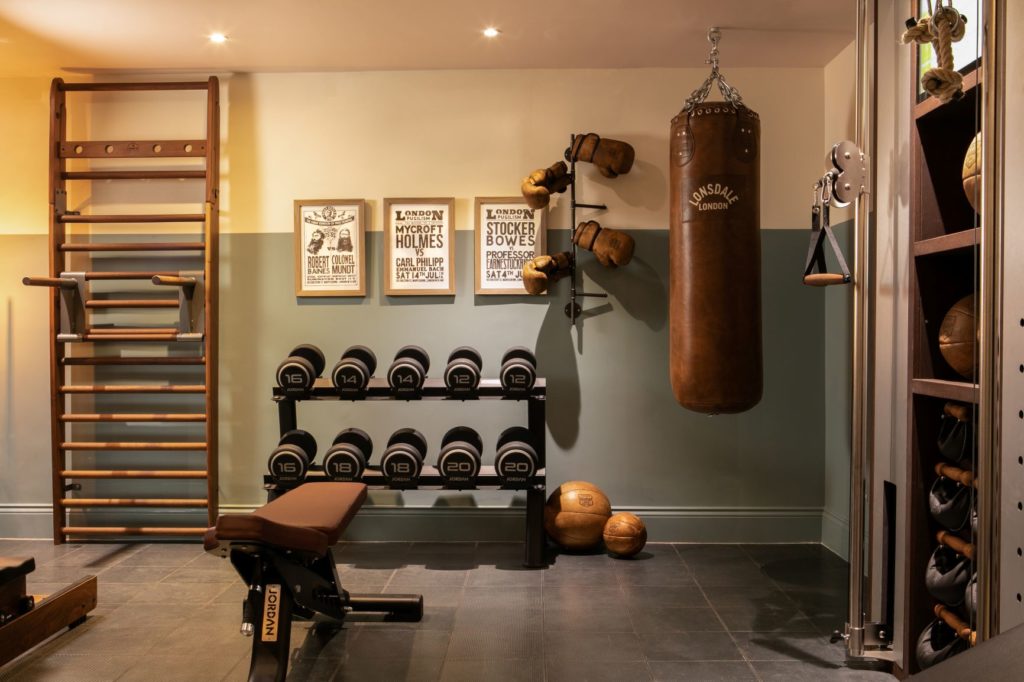 That is what gives the hotel its unique character (if you’re planning a stay aim for the duplex rooms, they’re fun).

Each bedroom room features a large printed panel on the wall, some are maps of London, others are pages from books, and each one has a large magnifying glass enlarging a section of the print. 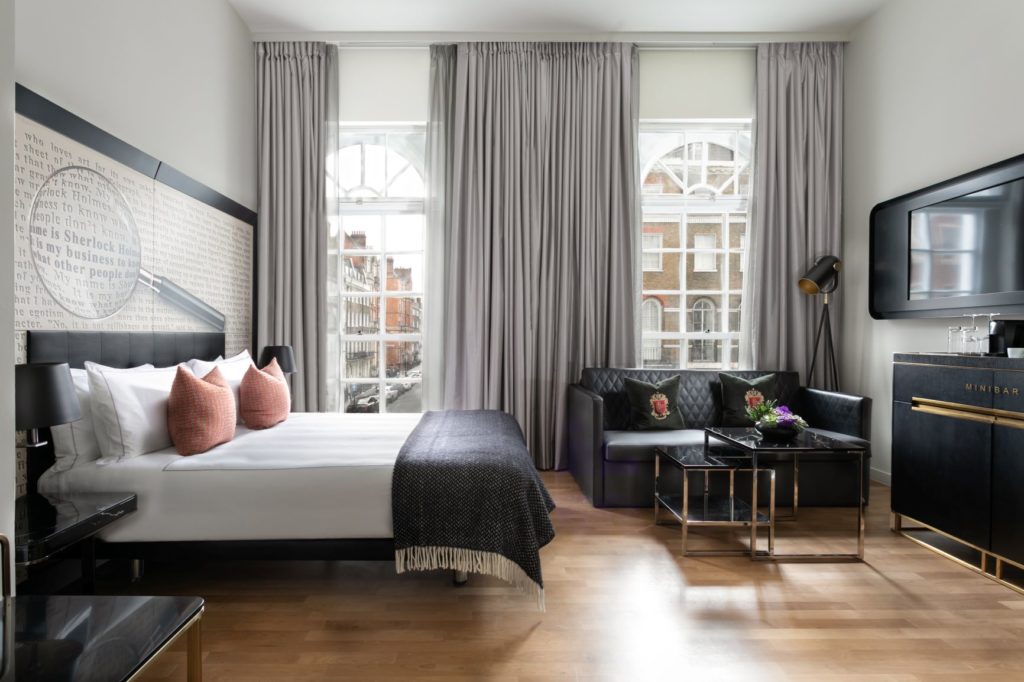 The bathrooms, even in the smaller rooms, are spacious and very well designed in white with marbled walls and surfaces. 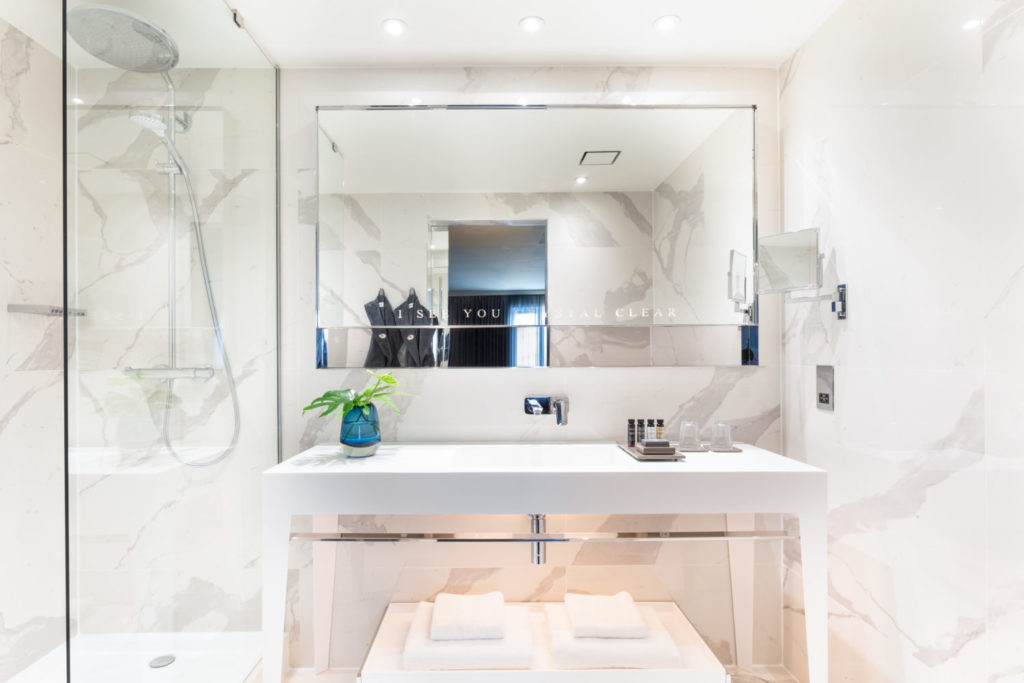 Heated mirrors demist in an instant and the sliding doors double up as full length mirrors when closed.

Design agency Digital Space are credited with the new interiors and conceptualists Zopsigog have, according to the hotel’s publicists, “continued the storytelling through flavoured intrigue and mystery; a nod to the historic and modern Sherlock Holmes culture.” 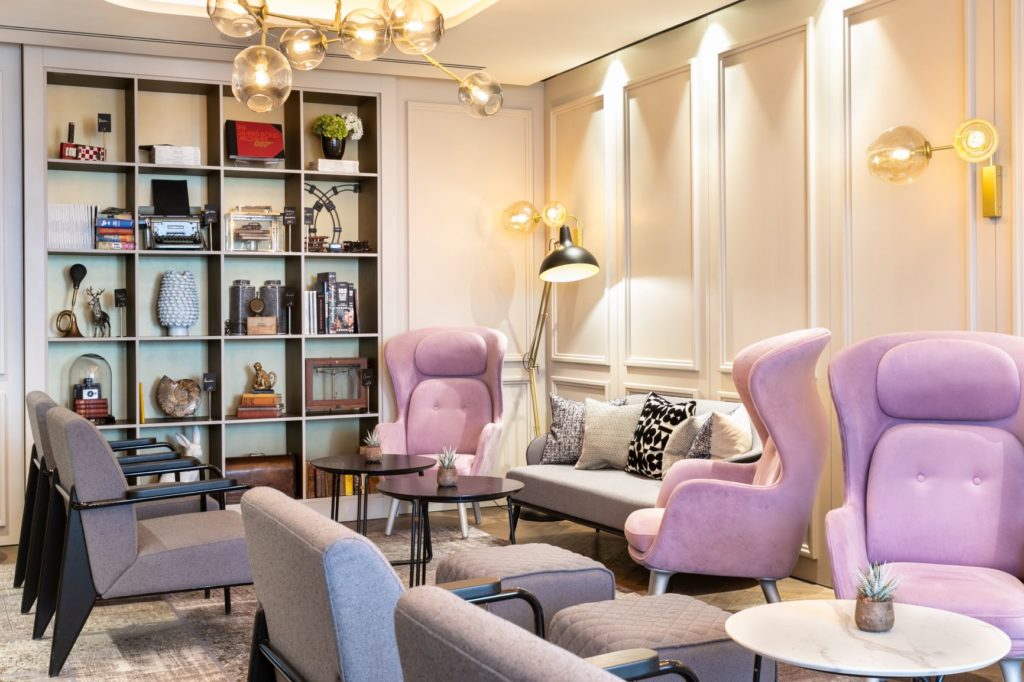 In fact that is exactly what they’ve done.

And they’ve done it extremely well.

The references are ever-present but subtle enough to avoid becoming a cliché or entering into theme park territory.

The restaurant, Kitchen at Holmes, is influenced by the seasons and Head Chef Stefano Motto’s travels.

The menu, an intriguing and eclectic mix of dishes, reflects the variety of London’s culinary zeitgeists, with ingredients, flavours and techniques from around the world conveyed through Stefano’s own sophisticated signature style. 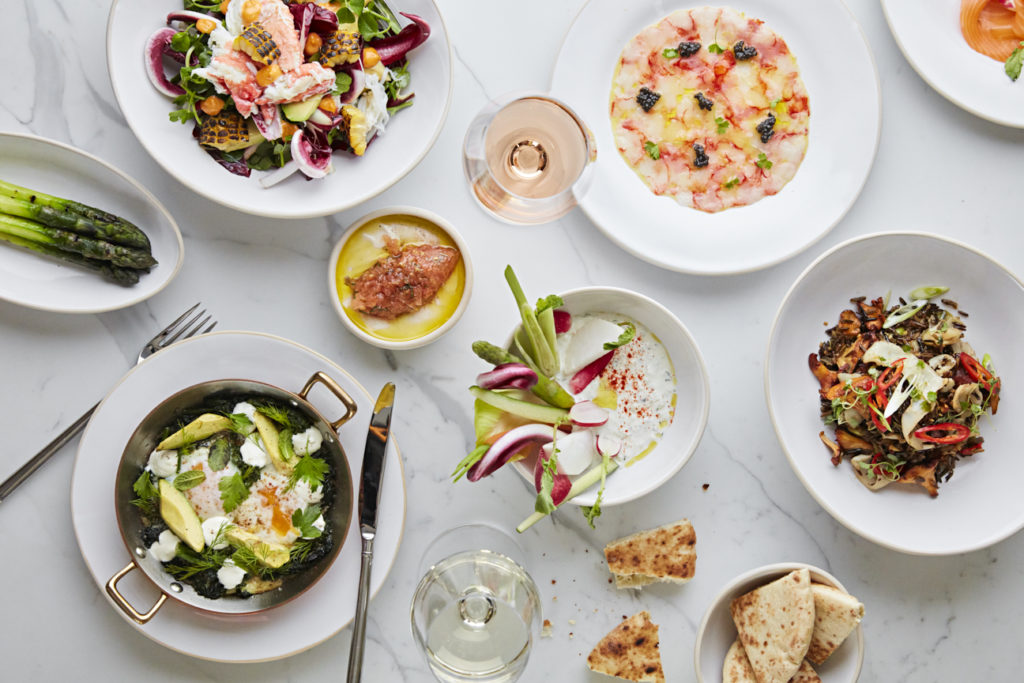 From Raw Scottish Scallop & Yuzu and Wagyu Steak to a classic Buffalo Ricotta and Truffle Ravioli and Spanish-inspired Pluma de Ibérico Bellota, dishes always have an emphasis on ingredient provenance.

The bar, which has changed little since it first opened, is an absolute gem and a destination in its own right.

By day it’s the ideal spot for non-residents looking to enjoy a relaxing coffee or afternoon tea.

But in the evening it takes on another identity.

It’s louder and funkier, they have nightly DJ sets, and they serve a great range of creatively named cocktails including the signature Sherlock’s Pipe cocktail and the herbal hibiscus and elderflower infused K T Time, which is served in a teapot as a nod to Ms Hudson’s teatime ritual. 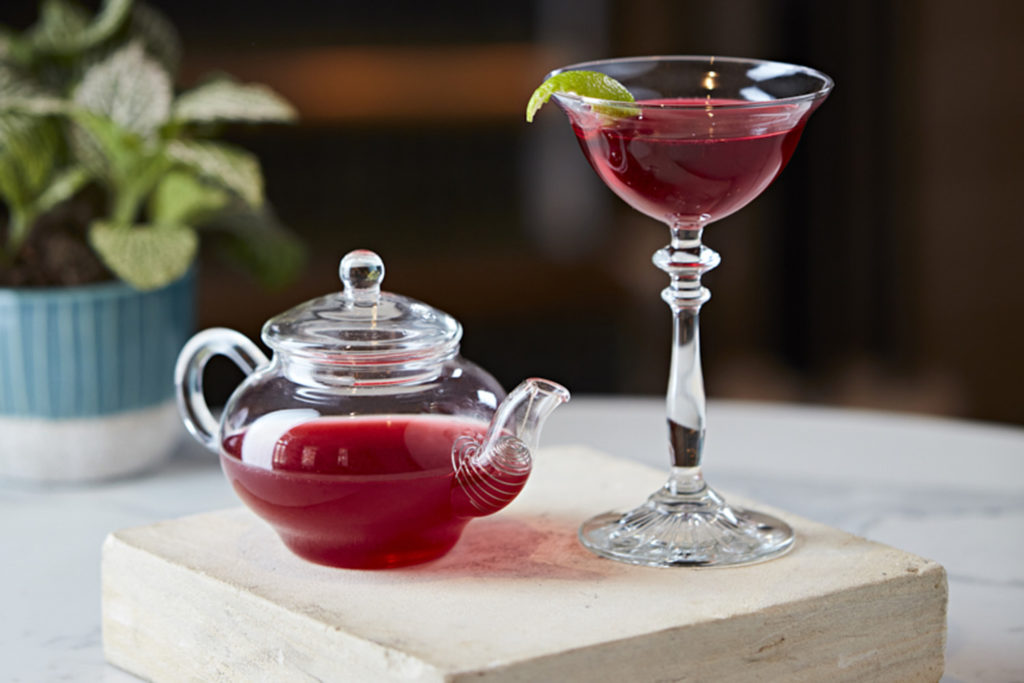 The Holmes Hotel is back to its gleaming best.

The designers have wisely retained its better parts and added some fine touches.

Not least the abundant mystery objects and puzzling art pieces that are dotted around.

Some of which will be easy to ‘solve’, some, like the example below will be less so.

This conundrum is one of many that are framed and appear on the walls of the upper floor corridors.

Every month, an old man crosses the border to get a specialist haircut. He cycles across the border with two large canvas bags of sand. The border officers got a tip that he is a smuggler. So the Customs Officers checked his bags and found they contained only sand. As they could not find any evidence they allowed him to cross the border. So what was the man smuggling?