With the help of the French government and private investment, the Château, a former country home of the Baron Jacques Pineau de Viennay, has been returned to its 18th-century splendour after a careful and meticulous restoration and is now open as a luxury hotel.

One of the finest remaining examples of French neoclassical architecture to date, serving as a stunning tribute to its noble provenance and rich history, the Château offers elevated French style and elegance throughout.

“Voltaire, Mozart, Diderot and Rousseau were guests at the Château, and I’m humbled when I look out from their rooms to the same panorama,” says Marcy Holthus, CEO and Founder of Pilot Hotels, who now own and operate the hotel.

“I’m looking forward to sharing this celebrated historic property with discerning guests seeking an unrivalled, authentic experience in one of the most beautiful settings in France.” 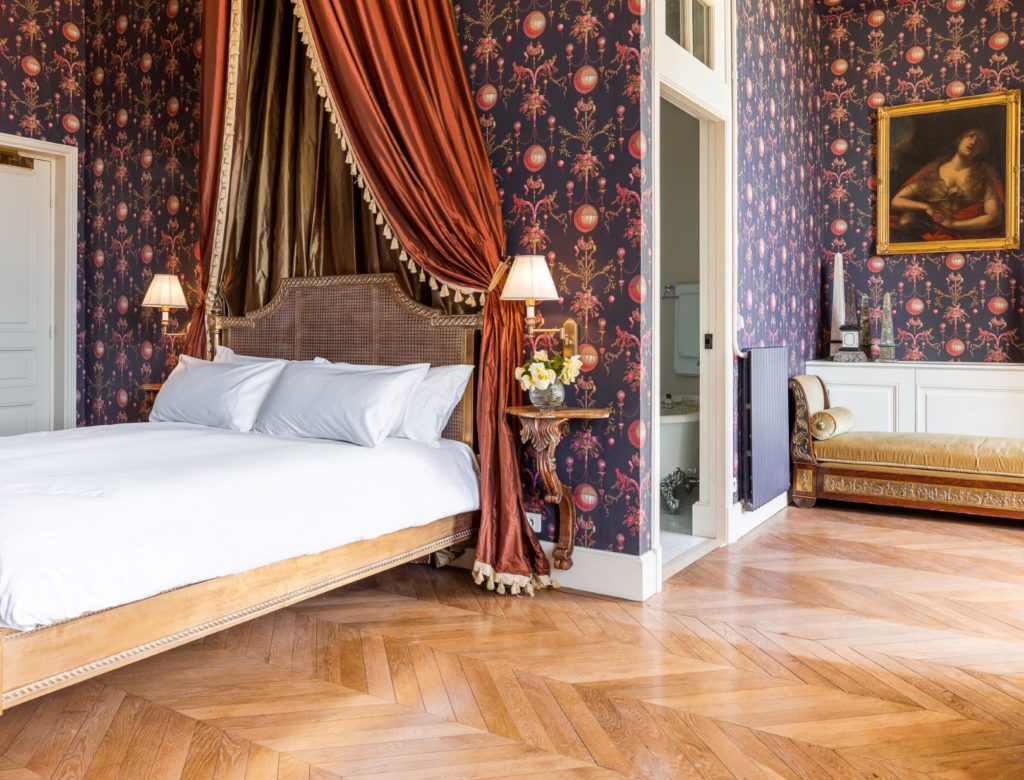 They reimagined and repurposed the majesty of the interiors, crafting the 17 sumptuous rooms and suites and grand living spaces.

The Château features limestone and French white oak floors throughout and walls, painted in shades of authenticity, adorned with original boiserie. 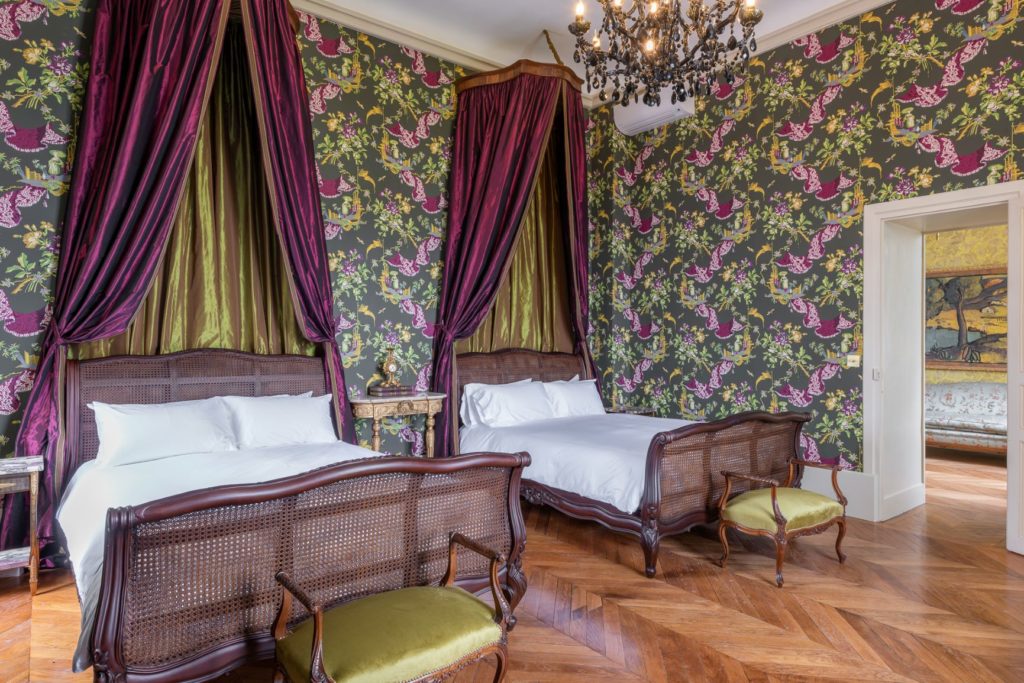 This stunning backdrop is layered with crystal chandeliers, sconces, fine art and furnishings sourced from several centuries; fine Persian rugs; and custom fabrics by traditional and innovative French design masters alike, from Pierre Frey and Nobilis to Christian Lacroix and Jean-Paul Gaultier – all juxtaposed in perfect proportions of scale and symmetry.

Hotel Château’s guestrooms include two apartments with private kitchens and living spaces, and all are designed in homage to the style, luxury and splendour first favoured by Pineau de Viennay. 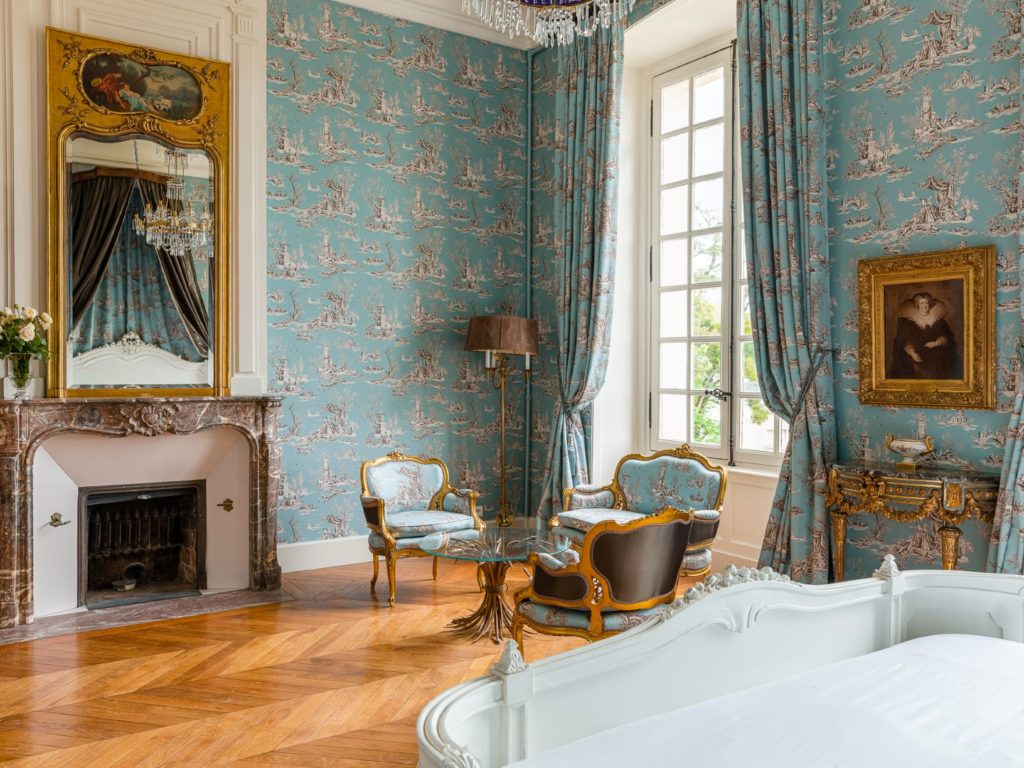 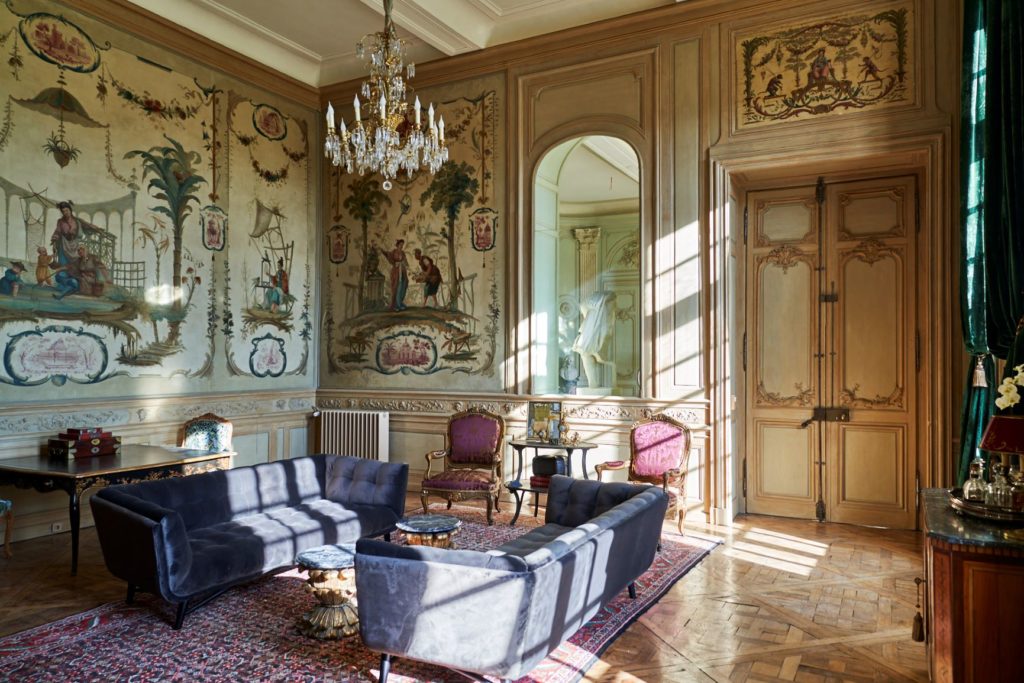 This exquisite Suite includes the pièce de résistance – the Salon Chinois, aptly named for the canvas-covered walls painted in the Chinoiserie style by renowned French Rococo-era painter Jean-Baptiste Pillement (1728-1808), whose work today can be found at the Petit Trianon, Marie Antoinette’s private garden palace at Versailles, as well as the Louvre in Paris and the National Gallery in Washington D.C. 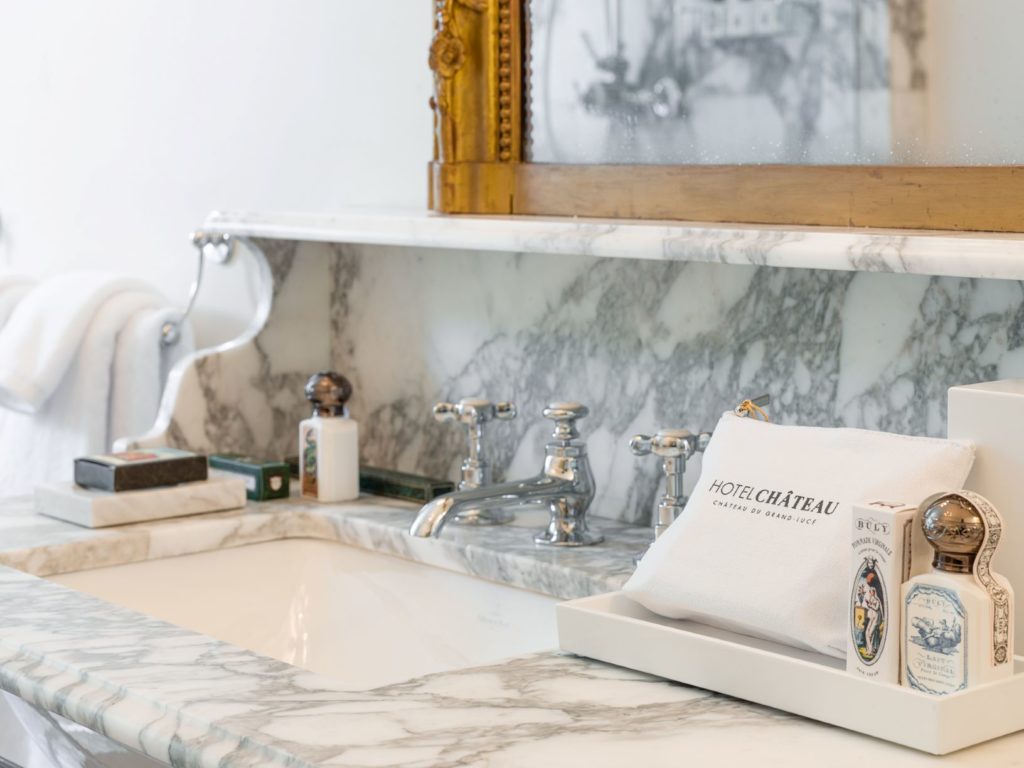 The suite features three entrances, including a private entrance directly from the West Garden, a King bed layered in fine European linens, a marble-clad bathroom with garden views, a ‘petite sitting room’ and a private library filled with French literature.

Inspired by the gardens at Versailles, the Château’s 80 acres of private grounds and gardens were designed on a north-south axis and remain true to French classicism.

The classic gardens are a brilliant feat of order and symmetry with near perfect structure.

Planted with a variety of flowers and plants, the Jardin Exotique (exotic garden) features original working greenhouses and the quintessential orangerie — protecting a multitude of citrus plants in the winter and open for private hire in the warmer months. 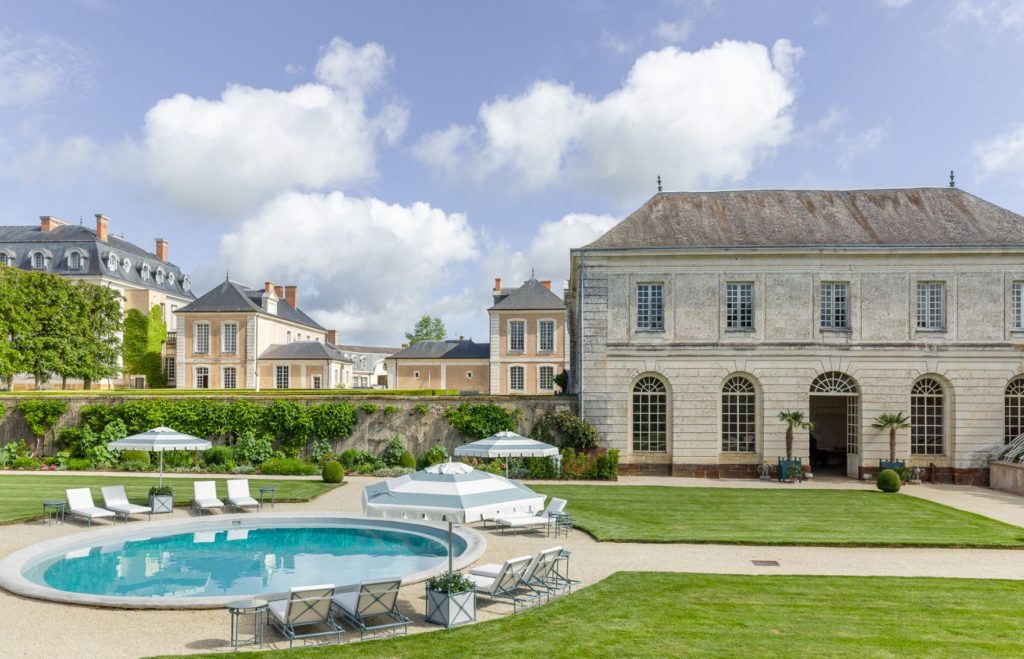 Below the parterre of the classic gardens is the potager garden (kitchen garden) and orchards filled with Loire Valley bounty — haricots verts, tomatoes of many varieties, lettuces, artichokes, herbs, lavender, stone fruits, apples and pears.

A majority of the produce will be used by Chef Maxime Thomas to create a seasonally changing Le Lucé menu.

Beyond the potager garden, there is much to explore, a lake, meadows and a historic white oak forest with a circular clearing in the centre where a statue of Persephone, daughter of Zeus, is found – one of eight statues placed throughout the grounds by King Louis XV as a housewarming gift to Baron Jacques Pineau de Viennay.

Known for its incredible splendour, the Loire Valley was once a region of critical strategic importance to kings, queens, dukes and barons.

With easy access from Paris, and perfectly situated between northern and southern France, the valley is sprinkled with hundreds of châteaux, originally built as opulent aristocratic estates, dotting the countryside. 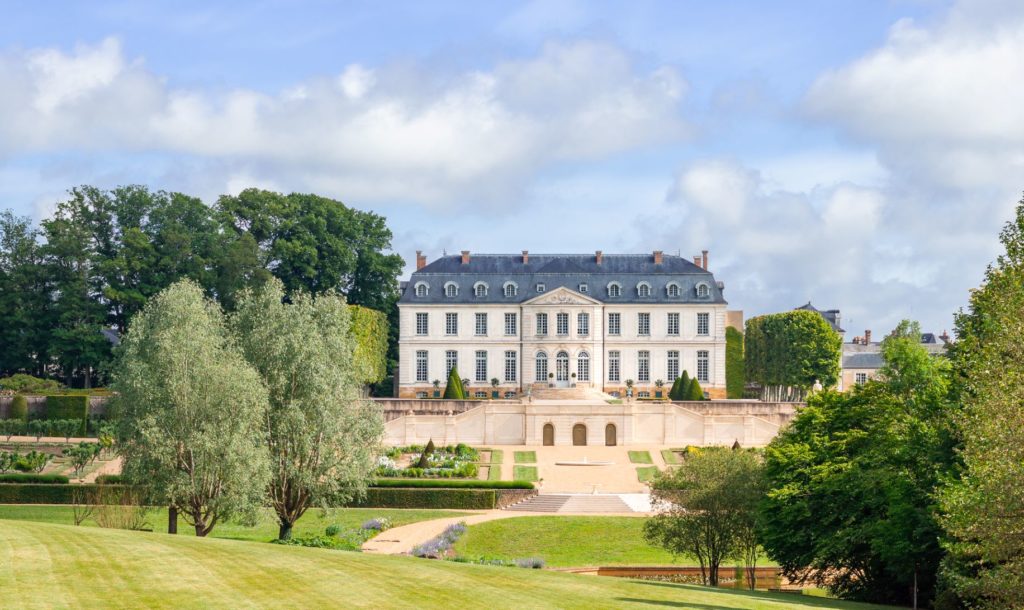 The entire area is deemed a UNESCO World Heritage site, with over a thousand years of rich architectural history and artistic creativity.

Having a near-perfect climate for a variety of grapes, the Loire Valley produces some of the world’s finest reds and rosés in addition to the fabled Sancerre.

There are a multitude of tiny wineries throughout the rolling landscape of the valley.

The Château is located in the village of Le Grand-Lucé in the northern Loire Valley. 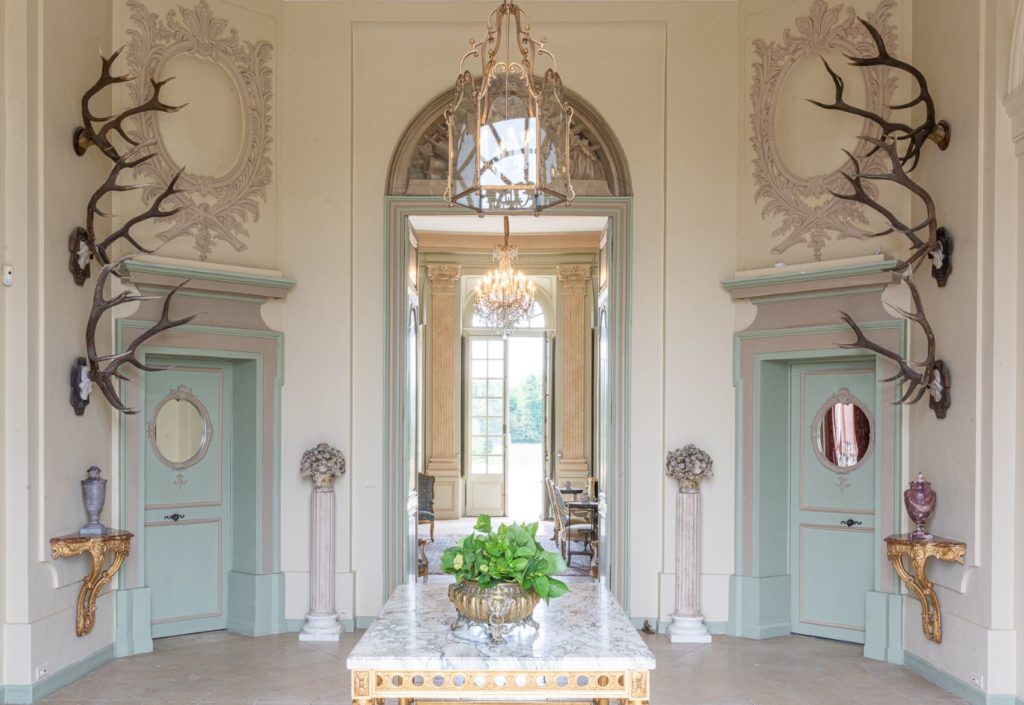 Untouched by tourism, the village is quintessentially French with two boulangeries, a charcuterie, two banks, a florist, a pharmacy, two coiffeurs, an historic city hall, an 11th-century church, a Tabac, a pub, cobblestone lanes and centuries-old stone homes.

It is the ideal gateway to explore the best of France’s countryside gastronomy, vineyards and castles, with easy entrée to the elegant cities of Orléans, Tours and Angers.